Ok, so my friend, Robert, and I have got started on our projects, he lives in San Diego so we are posting weekly progress of our projects on blogs so that we can kind of critique each other.
Danny’s(me): http://dannydraws.blogspot.com/
Robert’s: http://robertsaysdraw.blogspot.com/

Please feel free to comment on our work and critique us.
Thanks.

wow, you guys are just in high school??!!
awesome stuff! wish i could do concept art like that!

using a blog to document your projects is awesome. Great way to bring people to your work, very smart!

My first piece of input would be to explore abstracting the ideas more. at least explore the idea of going far away from the original. For example with the Nautilus, the original is very iconic, be careful to avoid making a cartoon, or slightly modernized version of the original. Instead, read the book and completely re-imagine it through the lens of tomorrow instead of yesterday.

I’m pumped to check both often, so keep it coming!

Great work, espicially considering your age and experience. Couple comments, the technique you guys each use is very pro (I can only wish I had your talent) so there’s not a lot I can say on that, but maybe we can give you some tips on the thought process.

Yo’s comments on the Nautilus point at something that might help both of you, which is coming up with an overall art direction for the body of work- a vision of the world that these characters and stories take place in. Not saying it isn’t there already, it could very well be, but I think it might be good to pick up the book/story and come up with factors that can be used as metrics to steer your aesthetic styling; is there a mood/emotion/feel, a technical element, a geographic or historical influence? Put those things down in writing, and use them as a starting point and a tool for guiding your creation process.

You can come up with this kind of rationale for the overall aesthetic, and then break it down into sub groups of character groups, environments, to individual elements. I’m sure you’ve seen some of the making of bits that WETA did for LOTR- they came up with a culture for each race, and used it to inform everything surrounding them-architecture, clothing, props.

Anyways, I think putting some thought in before you put the pencils down can give your work a really compelling story, and show you have a thought process behind the pretty work.

Danny- Not really familiar with the speedracer world apart from some old memories- I found a recap of your episode on tv.com,might be helpful to put that up as a starting point. Looking at your sketches so far, there’s a pretty big style jump from the old speed racer character to the new one. Old is a collared jacket wearing helmeted guy, the new doesn’t look particularly human or like he has much to do with racing in general. Maybe let us know why he’s changed like so? Also since you’re posting on an I.D. forum- what does that armor do that helps with racing? I see nutrients for racing, but I wouldn’t want to sit in a car long enough to need food and water in a piece of hardware like that. There’s some interesting exo-armor stuff in racing, like neck braces and the armor motocross guys wear, maybe looking at that stuff can help bridge storm-trooper to formula driver.


Robert-
Character studies are great, really nice explorations that suggest a period of time and style- but like Yo said maybe its a good idea to step back and consider the world the story is taking place in. Is there something new that you can bring to the story other than a restyling of the old? Referencing parts of the old is good, but why stop with simply restyling? Like how you looked at Nemo and some of his surrounding objects. The diving suit feels a little more like halo than deep sea explorer.

Great stuff, and I look forward to seeing more!

Gonna have to agree with everyone on the skills end of things. Wish I was crankin’ that stuff out back in high school. As long as you keep pushin that hard through college, you’ll be fine.

So anyways, as far as a critique, here’s my two cents:

Danny - The suit is pretty cool, but as others have said, it dehumanizes the main character (if this is the main character). It actually looks more like Racer X than Speed. Regardless, I’d also like to see more things going on with the suit itself. As it is, it has alot of things going on, but it still looks like a scuba diving suit with shoulder pads. It appears that not alot of thought was put into the legs or arms area, so they don’t keep the same aesthetic that the chest and shoulders seem to be going for. Unfortunately, this also makes it appear that this area would be weighing him down while at the same time, not serving a noticeable purpose. So I suppose, either go all out with the tight suit (think ninja, etc.) or build more of an armored suit like you have going with the chest area.
Also, in regards to the portfolio that you’re working on. I would suggest to not even bother with it unless you A) design a portfolio that not only looks awesome but is easier to use and/or performs functions that other portfolios cannot. or B) have so many sketches/renderings/pictures that you don’t need to work on that aspect anymore. You have about one month left at this point and if I were looking at your portfolio, I’d be more interested about what’s inside than what it is. If you show up with a portfolio that you designed and made, that’s gonna get critiqued as well so it better be well made. And to boot, if it is good, I’d think about you for product design, not entertainment design.

Robert - Again, awesome drawing skills shown with a funky background that works. The first criticism that pops to mind would be in regards to the diving suit. Unless I’m wrong, this is to be worn by the hero of the story (a.k.a. good guy). So I would think along those veins rather than making something badass cool. I should be able to look at it and know this is the good guy so it should have vulnerabilities in it. One key part (and you’ve demonstrated this through your drawings) would be the helmet. I’d suggest going for something that isn’t scary and embodies a “hero” look the best.
The last bit of advice would be to just show more details and more drawings. I’m eager to see the monster(s) and would like to see alot more detail of the ship. Where are the weapons, propulsion system, etc. and how do they “work”. What does the environment look like? How large are the monsters in comparison to the ship/people. This will help bring the interviewer into your world and allow them to get a deeper relationship with your work.

Sorry for the length, and like I said, just my two cents. Keep up the good work!

All I have to say is… AWESOME!

Somebody hire these guys and give them lots of money, they deserve it!

Notice we published it on the front page: 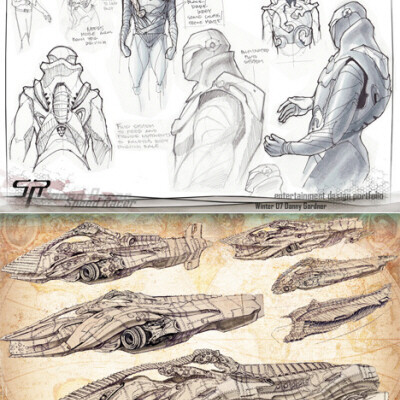 Hey all you slacker ID school-foolios: take note of 18 year-old high school seniors Danny (top sketch) and Robert (bottom sketch) who've taken the initiative to blog their entertainment design concepts and post the info on our discussion boards. And...

Now you guys can add that you’ve been published on the core77.com clogger as part of your Art Center apps… no lets see some more sketches!

thx for the comments guys really nice feedback, ive been showing robert too and he appreciates it aswell.

To clear some things up on my design, the character ive done so far is not hte main character its the bad guy of the story, Kabala. And the reason his arms and legs arent as busy as his body, or vest piece, is because he’s a race car driver, cramed in a small spot and needs as much freedom as possible to flick switches and steer properly. And everyone knows the most free you can be is naked, but that would be wierd… so i just put a skin tight suit on him, somewhat like race car drivers today (i said somewhat) but a little tighter. And then the vest piece locks into the seat back which rotates a little bit so the driver can still manuever with his body. anyways, ya hope that clears up some stuff with my first week blog post.

Also i Have about 7-8 weeks left, and if i keep up with my schedule i planned out, i should have an entire week at most to construct my portfolio case, which will be structured almost exactly like a pina zangaro. (Also i scheduled my project deadline to be a week before portoflio submition just to be safe)

holy shit yo… WOW thank you so much, we really appreciate that, robert and i are in shock… WOWWW. thank you a million times yo.