I was just checking out the top 25 finalists of the Electrolux Design Comp.

Is it just me or does it seem that they just picked the 25 silliest ideas they could find of Yanko Design?

I mean, blue sky ideas by all means but it seems as if the concepts have no real basis and are not really grounded in reality.
Gotta say, I wish a company like Electrolux would put more emphasis on how things are made and how they work instead of completely unsupported junk.

I didn’t submit by the way but I have to be honest, I think I would be bitter if I had.

Well you know what they say, Nothing Sucks like an Electrolux…

well, I don’t want to hate on Electrolux. I respect the company.

But seriously, what possible employer will not shake his head when he sees the “Mirage” concept in a portfolio?
It promises:

“This is the vision of Yu-Lum Tseng whose concept can beam in a friend, partner, or family member for dinner so that you donâ€™t have to eat alone.”

Actually, this is really frustrating because competitions for students like this one is just promoting this kind of thinking. Zero research. 90% of these concepts define physics and biology.
I understand what they want to get at, but in the end of the day, in order for an idea to be useful, it has to be taken further.

What is going on here is SciFi not Design. Big difference.

i read through these and it seems like a joke. I didn’t enter or even read the brief or anything, but i have a few friends who did, so i heard a little about it.

I think all electrolux needs for a top 25 is a nice CAD rendering and some flowery language, all mixed together with impossible technology. There was one on there, somethign about designing for mars inhabitants?

All these concepts would be great in a sci-fi movie or seomthing, but i think it is really disappointing. There is no design for manufacture or ‘real-world’ stuff at all.

I think all electrolux needs for a top 25 is a nice CAD rendering and some flowery language, all mixed together with impossible technology.

Isn’t it like that with most competitions or magazine eye-candy, just something that makes for a good picture with captivating verbage?

Yup, a waste of time for all parties involved… No critical thinking for the students and a wasted opportunity for a tangible result for the sponsor.

Back in the early 80’s Krups North America sponsored a “Kitchen & Bath Product” competition. Being a hungry young freelancer it seemed like a great opportunity to break into the housewares field, so I entered the competition.

Pointing to an aging population with the inability to hoist 40 pound, 5-gallon water bottle up onto their dispensers, while simultaneously inverting it into the tank, I went to the trouble of fabricating a working prototype. Unlike other dispensers in use at the time, it contained the bottle in the base; the water was delivered by a hand operated air-pump which slightly pressurized the bottle (via a cute little adapter I fabricated out scrap PVC) and forced the water out of the spout at the top that also functioned as the shut off valve.

A finished model depicting surface finishes, and the manufacturing processes used, was photographed and submitted along with engineering drawings, and manufacturing specs (per the competition rules).

Three months past the announced decision date, and after my written inquiry, Krups NA responded with a letter stating that there were, in fact, “no winners”, citing a lack of sufficiently innovative submissions by enough contestants. O-kayyy… … …

Apparently it wasn’t innovative enough for KNA at the time. Now you can buy any of a number of bottom-loading water dispensers … mostly of “eastern” manufacture.

Lesson learned: Don’t waste your time on competitions. “Waste” it on following your instincts to market. 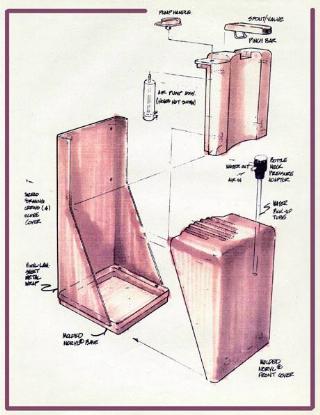 Did you guys read how Electrolux defended their decisions?

The fact of the matter is that we were looking for creative, out of the box designs that answer consumer needs, including slightly distant future ones. That is also our approach to develop or own products. Furthermore we looked at the balance between aesthetic and functional design of the concepts.
We donâ€™t organize this competition to get ideas for developing products within the next five years so we donâ€™t mind if theyâ€™re a bit crazy. On the contrary! We are looking for out-of-the-box thinking designers that can spot what consumers need and want going forward and sometimes just let their creativity go wild.

I think it is good to go as far out as you can. Just think about what people would have said during the Civil War if you told them that in just over a century man will walk on the moon. Go big or go home on blue sky, I say.

I think it is good to go as far out as you can.

well that is my point, “as you can”.
what was proposed is in many of the designs is just completely impossible and unsupported.

For the next competition I see I’ll have to submit a picture of me rubbing my temples like Professor Xavier because in some distant future I’ll be able to mentally accomplish everything through nanotechnology, free energy and direct integration with my brain. I won’t even need a product, maybe just some Telepathic Temple GreaseÂ© to keep my skin from getting rubbed raw. So I guess I’d have to design that package, or better yet just take the hit the first time without the grease and just make sure that’s the first thing I teleport over, no need to buy a package. Built in rfid chip in my brain automatically pays for it from my work credits

If you’re going to do that, why bother entering the contest at all? In the future you won’t have to enter competitions to win, so they’ll just hand you the award right?

Lesson learned: Don’t waste your time on competitions. “Waste” it on following your instincts to market.

Skinny- thats the rub man. What you described is not far fetched really given Moores law and existing producta like the Luke arm. The thing is that most people dont connect the dots. It is not so far fetched that you could assemble proteins to create food, but then no-one thinks “Hmm protein assemblers mean spare body parts, maybe spare bodies, spare brains? would there be destructive disassemblers? Could I transmit information through the assemblers? Does it have to be meat? Could it grow a bush or a tree? If you have the sophistication to grow protein, would you have the sophistication to grow a house from that tree?”

Its like the old GI Joe cartoons where Destro has a time machine which off-course is destroyed at the end of the episode. I think that most kids were thinking " Dude its a time machine. Make another one and go back to prevent the destruction of your Gen1 time machine!" The wiriters had to deliver something but did not create a cohesive storyline as a result.

So I think that a lot of designers dont take the extra step to connect the dots. If you go blue-sky you have to think like a sci-fi writer and think of the sociological impact of technology. Thats where blue-sky gets interesting.

Lmo- I guess that you are a great mind then

Thanks for posting that example.

MasterBlaster, you have some great points. Recently I worked on a really blue sky project, and like you said, tried to connect the dots and talk about what else could be happening in the world with the technology I was using for my project. Anyway, I found that it blew people’s minds a little bit too much. There was enough to take in and understand about my one little corner of the fiction that when I started talking about other aspects of it people got lost and didn’t pay as much attention to the things that were the core of my project (sorry for that run on).

Anyway, the best part about it for me was that people like you would connect their own dots with the information that I gave them. I ended up getting a lot of different opinions and theories by not connecting every dot for people. It’s important though that you already know a lot of the implications so you can talk about them when you have to.

Right, and sometimes you have to make sure the dots are close enough so that people know that there actually IS a connecting dot. When the next dot in the concept is so far off, it makes it harder or impossible to see.
When you really break it down, we’ll eventually get to the point where we all just ARE, everything just is as it should be, our technology and knowledge will progress to the point where we don’t need physical bodies or products as we know them anymore to accomplish our wishes, etc… but that dot is soooo far away from our current dot that it’s barely comprehensible and leaves you with very little that you can act on right now short of being a writer or futurist. But somebody has to do that stuff too

johnnnny: Yes I get what you are saying regarding a core idea. My point here was that a blue-sky project typically has a technological leap as a premise that the designer does not fully understand the ramifications of and designs a banal solution.

Lmo and skinny: you are absolutey right. That pulls folks in rather than pushing them around-