0-60mph [0-97kph] in four seconds, making it the fastest, and in my opinion, best looking (the mirrors… myeah…) product this company has ever produced. 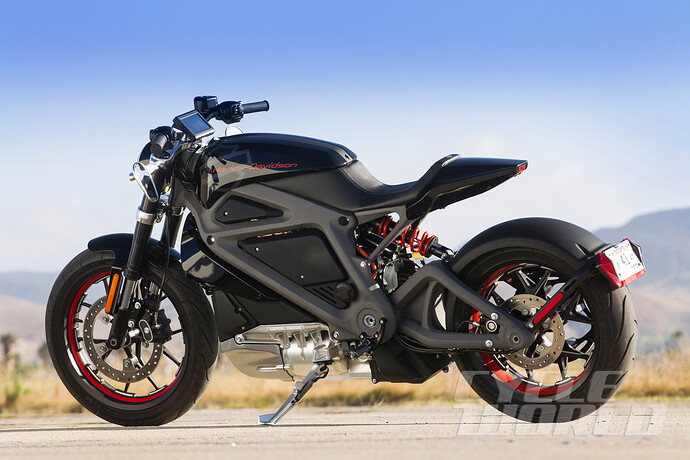 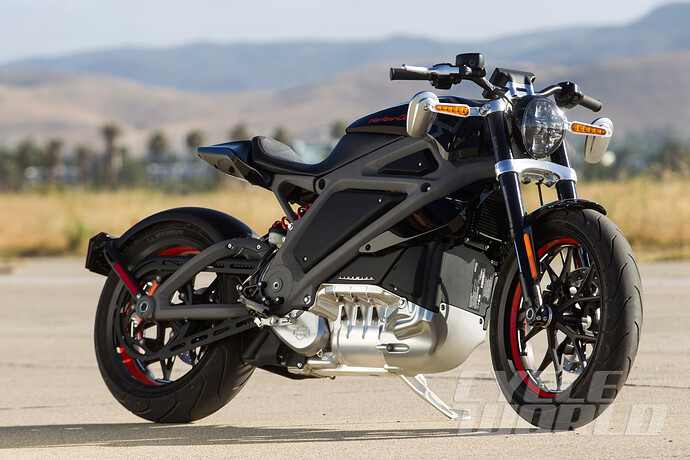 Kinda looks like a Buell. I always liked those. It will be interesting to see what demographic buys this bike.

I think the design looks pretty well done and I’m impressed that they seem to be the first major motorcycle manufacturer taking electric seriously. The performance should be awesome with the electric motor, the simplified controls (no gear box) is going to make it easier to ride and control. I’d like to see a white one with a tan leather seat. I’m curious if that is the actual sound it makes. Sound seems like a challenge here for the Harley traditionalist. But your brand and product must evolve. Hopefully you take your core demographic along with you but the risk of not changing fast enough far enough is to become Oldsmobile. Props to HD on pushing it.

It does seem to have Buel like proportions which is a very good thing in my opinion.

The LiveWire logo is a little bit too retro for my tastes, but otherwise the package in impressive. The ad hits the right chords without making them look like arrogant tools, good balance.

I really like the vertical headlight that ties in with their racing graphics.

I’m very impressed that they are tackling an electric bike head-on, instead of taking an ostrich like approach to the technology.

The LiveWire logo is a little bit too retro for my tastes, but otherwise the package in impressive.

Yeah, you would have thought that they would have been a little more “digital” with their badging, considering the liberal use of LEDs. They’ve used their “new” logo before and it’s understated here; used as a backdrop for “Harley Davidson” on the “tank”, and embossed on the motor case below the right foot peg. 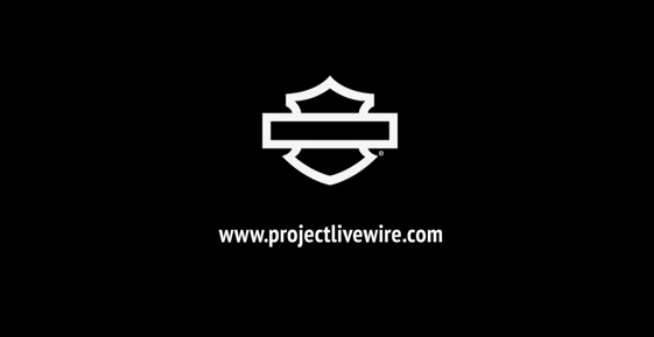 Hopefully you take your core demographic along with you but the risk of not changing fast enough far enough is to become Oldsmobile. Props to HD on pushing it.

Indeed. But they aren’t leaving it up the the Old’s Cool crowd. This is the first weekend (New York) of a 30-city LiveWire Road Show. You can bet the design crew will be taking note of public reaction.

I’m curious if that is the actual sound it makes. Sound seems like a challenge here for the Harley traditionalist.

One of my BMW cronies quipped that it would take at least 50 amps to make it sound like a “Harley-Davidson”.

And 0-60 in 4 seconds is no squid … that’s a comparable sport bike time > Motorcycle 0-60 Times | Find 0 to 60 & Quarter Mile Specs for Cruisers, Sport Bikes & Other Motorcycles

Personally, I like it. A lot. Typical of electric vehicles, I’m sure it’s legs are not that long, but it would be the perfect twenty-mile-commute bike. Replacement battery cost is an unknown, but any rechargeable battery has a definite cycle-lifespan. Brammo includes a 24-hour roadside assistance service for the first two years, and a 5-year, 50,000mile, transferable battery warranty, so it will be interesting to see how Harley responds to that.

I think the design looks pretty well done and I’m impressed that they seem to be the first major motorcycle manufacturer taking electric seriously.

Like you said yo. Evolve or die. I think H-Ds had their eyes on the guys up in Oregon, Brammo. The Brammo Empulse has a six speed gear box which enables it (company claim) to attain 100mph, and a 100 mile range. Price? $19Large, but there is a $2,500 "incentive; $16,500 - on the high end of the performance/price envelope, but considering the fuel and reduction in maintenance costs it’s a realistic price. 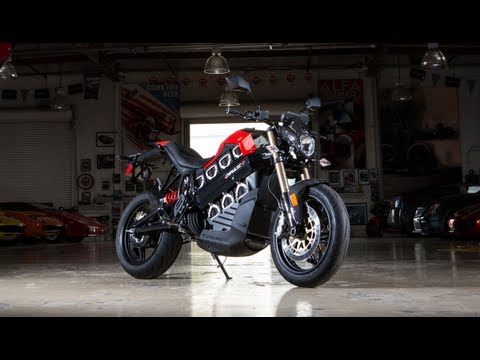 And Brammo isn’t new to this market; they’ve been building electrics since 2010. 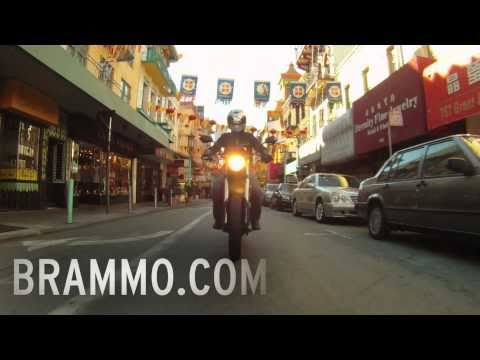 I’ve been aware of Bramp for a long time (i used to live in Oregon, people there have a lot of pride in local stuff) I just meant that Harley is surprisingly the first traditional gas motorcycle company to make a major move like this. I would have expected Honda or BMW. It is impressive.

BMW went electric in late 2013 with it’s C Evolution. It’s more of a scooter than a true motorcycle, but it absolutely gets the job done; 0-60 in the 6 seconds, with a 60 mile range. It’s only just now making it’s way to dealers and the price is, to say the least, stunning. $20K.

But ya get all this sick die casting work.

BMW’s gas powered C650GT hasn’t been doing so well; and at less than half the price of the CE. There have been a number of technical problems (notably it’s timing chain) and a shortage of warranty parts/delivery times have let a lot of owner with a nasty taste in their mouths. Overall US scooter sales haven’t really proven to be what was expected - north Americans being more “motorcycle” inclined. Considering BMW’s ninety year involvement with motorcycles you would have thought a proper electric motorcycle might have come out sooner. World-demographic-wise however, scooters rule. 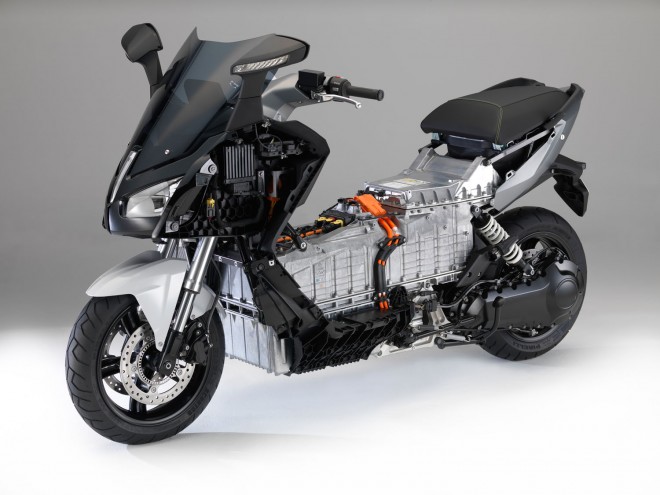 I’m loving the sound the Bramp makes in the Leno vid. It would be pretty cool to be tooling along at 60mkph with nothing but a little whine and wind noise in your ears.

You’ll have to check out the Live Wire when it hits SoCal. I’m sure it won’t make it’s way up here. And I don’t think I’ll be feeling like driving four hours up, or down, state to see it.

Thanks for posting LMO, I rarely get down to this part of the forums but these are beautiful (and quite different). That new Harley has the whole cutout geometry done well – feel like it will look current for a while.

I’m assuming that the Live Wire isn’t for sale, seeing as they are only “touring it”. Yamaha has had 3 electric concepts that never entered production. 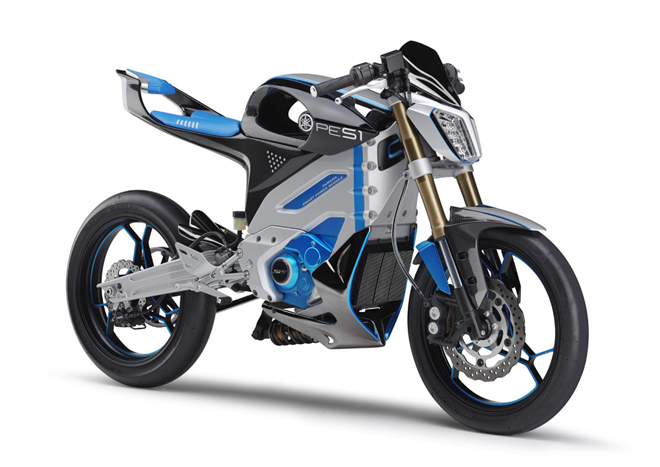 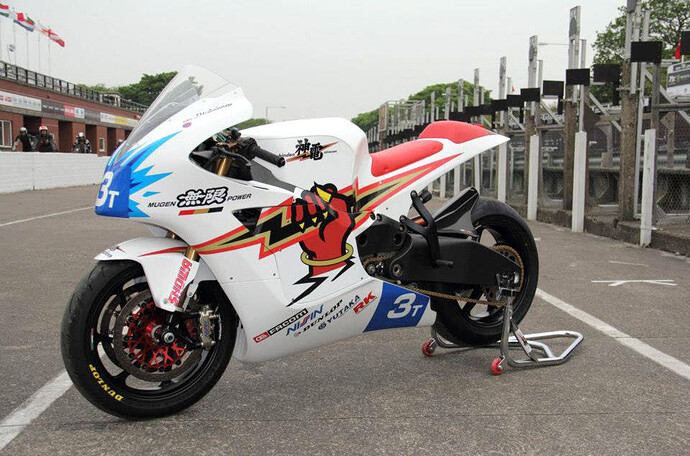 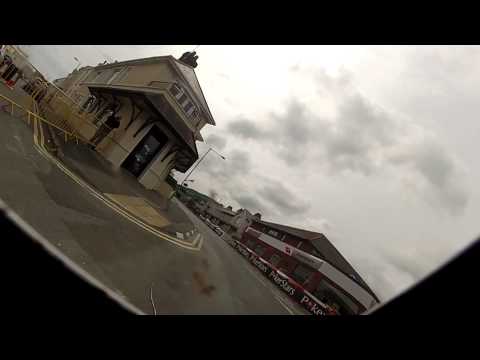 Sadly Micheal Czysz was unable to update his E1PC for 2014 as he battled cancer. I’ve heard his recovery is going well though, so the 2015 update should be epic. 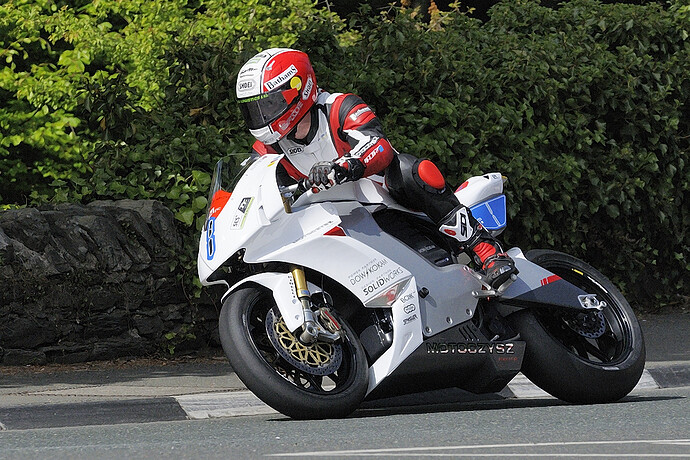 KTM also offers an electric bike, it seems to have enough torque and power, I’m not sure how long the batteries would last if you ride it hard. I think it’s a sensible choice for riding in the bush, cleaner and less prone to cause a fire.

In Spain we have this manufacturer, Volta, that has been offering electric motorbikes for a while. Apparently they are quite known in Barcelona but I’m not sure if anywhere else. The chief designer was one of my friend’s sketching professor at Elisava. 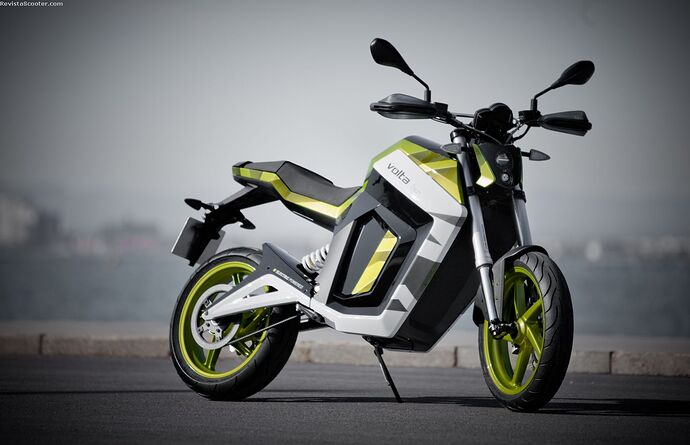 I like the idea of an electric vehicle for daily commuting and then having a combustion one for leisure, maybe one day

I really like the turbine-like sound the electric motors have, it sounds like it came straight out of a sci-fi movie, maybe Tron

Thanks for posting those IDAL.

I have no clue why a machine, that a human wraps its body around to ride, has hard, wedgy, shapes.

I’m guessing the Mission One never made it to production? 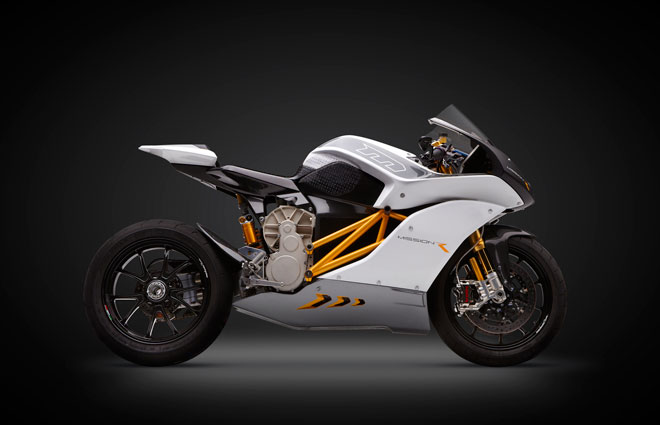 Thanks for posting those IDAL.

I have no clue why a machine, that a human wraps its body around to ride, has hard, wedgy, shapes.

No need Lmo! I’d say in this case the edgy design tries to give it a technological, advanced and sporty feeling. This one in particular isn’t an R bike, it’s more for the city, so the riding posture is pretty much vertical. In my opinion, it’s an attractive motorbike, probably would think of it if I was to buy one. The designer has a coroflot page with more pictures and some other projects. 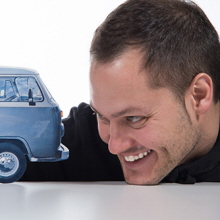 They aren’t all hard and angular.

It seems we have another company from Spain developing electric motorcycles. I’m happy to see some movement in this field, especially when they are resurrecting old brands that went bankrupt! 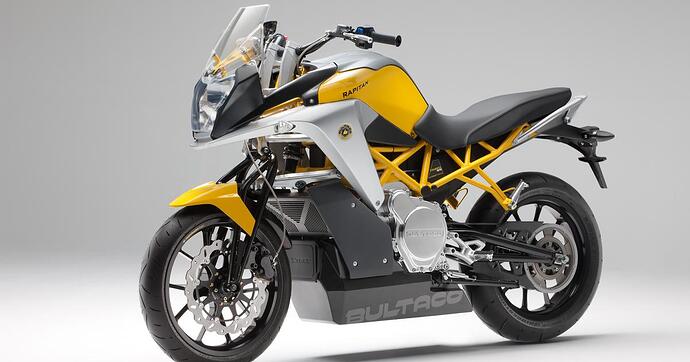 It’s been 13 years since a bike came out with the famous Bultaco thumbs-up logo on its side. By 2001 the once-glorious road racing days of this Spanish motorcycle company had ground to a halt, and only retro off-road two stroke enthusiasts and trials...