If you own one, I’d really love to know why you love it! I want to understand. If you can offer any thoughts/ ideas. Great. Thank you.

I’ve never actually heard of the product before you posted it, so don’t know how actually “successful” it is. But after checking it out with a quick google search I like.

I think what may make it appealing is-

Why not combine them? The symbolism is pretty clear.
Also, all the things Rich said.

Don’t think I would buy one though.

I also haven’t heard of the thing until this post.

This product is over two years old and I too had never heard of it until your post, so I don’t know how “successful” it is. If you sort lighting on Design Public by bestsellers, it’s in the alphabetical bottom half, which means they haven’t sold a single one in the last month or so. I can tell you that popularity among design bloggers doesn’t correlate well at all with sales.

I agree with you- a plastic pigeon with a light bulb inside is too much whimsy for my taste. There’s a very fine line between Important Design and something your grandma might buy at the garden center.

Reminds me of plastic flamingos that I saw in yards in Florida. So tacky, I can never imagine buying anything like it!

What I would like to know is why you hate it so much. Why the rant of this rather insignificant product. Do you have a personal relationship with the designer? Jealousy?

why why why all these questions…

Reminds me of plastic flamingos that I saw in yards in Florida. So tacky, I can never imagine buying anything like it!

Fun fact: there are more plastic Flamingos in North America than real ones…


I usually have a soft spot for fun in ID - we spend so much time trying to be serious and business like that it’s nice to break out and do something irreverent and whimsical once in a while.

The pigeon is harmless fun, something people would probably buy far a party in their backyard, or from one of those “design stores” that sell bright plastic kitsch crap knocked off in China because it matches their personality.

It’s funny I find, given this product and the context of our other discussion about modernism and all, that I’m just about the only one for it and relates to the whimsical side of design.

I perhaps see it as more avant garde than kitchy, along the lines of the Campana Bros work, Droog, Mooi, Tobias Wong, etc. Taking a pop culture item, honest materials, and repackaging it to make a lighthearted statement piece. As much as I do like the clean rationality of Braun, Apple etc, I also do like these kinds of things, and feel it’s miles away from the bright cheap plastic “fun” design things that other seem to attribute it to. 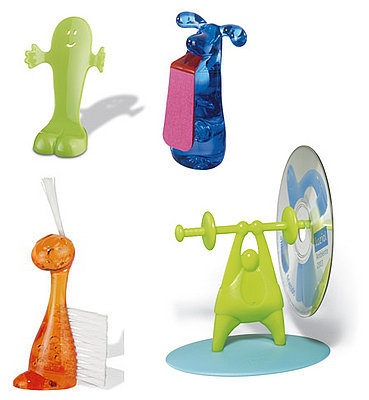 Thank you so much for all the feedback. I’m sorry not to have posted earlier. I’ll try and reply to everyone. There is certainly a nuance to it that I’d overlooked. I’m not all that fond of pigeons… but. I think I see it as a rather inane combination visual markers, materials and, well, I’m not altogether sure, hence posting. It’s not really saying anything. But then that’s another argument/ line of inquiry.
I agree with rkuchinsky that it is a witty/ humorous approach to design, or at least, can see that that is where it’s coming from. I suppose I’m not that entertained by it!

On the whimsical/ playful front. I too like the Aarnio dogs. There was a one-off thing that Grcic did with it that was nice. His website is down so can’t post a link/ image. He stood it on it’s nose. And there’s GuixÃ©’s Plant Me Pets. I really like those.

That McDonald’s spoon is hilarious.

On the successful/ popular front. It’s kind of his signature piece, something he’s known for. One of those ‘you need to come up with a pigeon/ antlers/ etc. piece’ conversations that you (inevitably) have sometimes. Something that gives you more exposure. Trying to understand the field I’m working in. Blah blah blah.

Thank you also for all the further lines of inquiry/ resources. I’ll try and find the product/ context/ modernism discussion.

its a simple modern update to the classic ‘kitsch’ design icon of the ceramic flying ducks…abit over priced but most ‘designer’ stuff is.