I don’t know much about bikes, is that pentagon shaped piece on the front wheel the brake disk? The front suspension/steering looks pretty unique. I’ve seen one sided forks before, but they are usually triangulated I think?

I know these are concepts, but any thoughts as to production? I think the idea is very viable. I see a few people coming into Nike on those little 2 stroke scooters… one guy even had a segway… one guy… anyway, a lot of people live within a 8 mile radius and we have a lot of carpool incentives, and mass transit incentives that don’t really work. I could see a corporation subsidizing something like this, picking up a portion of the cost.

Yes, the pentagon shaped disk brake in the front has a caliper that is mounted to a kingpin at the center of the wheel. It is kind of “inside-out.”

As far as production, ecycle has no plans to produce finished bikes themselves, but rather they intend for the platform to be sold to those who wish to build custom bikes or create a line of bikes for themselves. There are some similarities to the “open-source” business model in that someone could by the platform, but use their own motor, seat, handlebars, or body kit and resell it. I would assume money is made by value-added design as well as maintenance and servicing expertise. At least, that is what I understand at this point.

These renders show the versatility and excitement that the platform can generate with minor changes in the form.

[img] Hmm well I like the performance aspect of your concept. For me the whole thing with the shocks kind of bothers me. The rear single sided shock is I guess interesting I’ve seen it done before ( old ATK dirtbikes come to mind) but IMO its really not needed. Almost all modern bikes just use a simple mono-shock, putting a shock hanging out on the side gives it a odd asymmetrical feel, and it’s really not needed Also I realize these aren’t a final production model but wouldn’t there be a ton of stress on the front suspension? It seems like that front swingarm would torque under the strain of road travel. The bars and headlight seem to be a bit high like they’re just hanging out away from everything else. I like your ideas for the front but if it was me I would maybe try something for a little forward movement. I’m trying to think about how I can put it in words, it just seems like there needs to be more area out front I guess…if that make sense, like a bit of something to make the bike more defined as the front. Don’t get me wrong I do like your concept , sort of reminds me of a stripped down Dodge Tomahawk, and your rendering is really cool. I was trying to see what the suspension was like on the Tomahawk but it look \s to be mostly internal, speaking of which I found this pic, check out the business guy riding around on a V-10 with a seat, too bad they won’t take it over 30 MPH from what I hear. http://images.search.yahoo.com/search/images/view?back=http%3A%2F%2Fimages.search.yahoo.com%2Fsearch%2Fimages%3Fp%3DDodge%2520tomahawk%26ei%3DUTF-8%26fr%3Dmoz2%26fr2%3Dtab-web&w=1024&h=768&imgurl=www.seriouswheels.com%2Fpics-def%2FDodge-Tomahawk-Speed-1024x768.jpg&rurl=http%3A%2F%2Fwww.seriouswheels.com%2F2000-2003%2F2003-Dodge-Tomahawk-Concept-Speed-1024x768.htm&size=213.4kB&name=Dodge-Tomahawk-Speed-1024x768.jpg&p=Dodge+tomahawk&type=jpeg&no=4&tt=926&oid=2c129b0edcbf4316&ei=UTF-8

congrats on the c77 frontpage coverage: 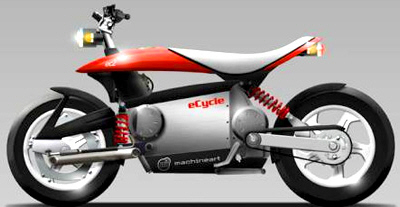 Machineart has applied conceptual styling to eCycle's hybrid motorcycle platform to present a complete package to those wanting to produce hybrid motorcycles, ATV's and similar vehicles. eCycle's platform is designed to be "rational, rideable, and...

congratulation on the front page!

By the way, are there any other designers thinking of hybrid/electric bike?

I did one, which is a part of “alternative reality” project and it is less realistic, but anyways, today`s technology is almost there: Electric engines in both hubs (yes, it is 2x2

, fuell cell generator in the main body … just check it out:

and the link to the cg-cars, where the image is hosted http://www.cg-cars.com/forum/gallery/showimage.php?i=865&original=1&c=5

I wish I could say something more articulate than- that’s hot!