Dyson design and technology move into haircare. From $399.99!!

One of the guys I went to University with works there and was very excited about this launch.
I like the idea of a silent hair dryer so I can actually hear the TV/music while the other half gets ready

I’m not majorly sold on the design though…its clean, but I just feel like its missing something - it does look more balanced when the attachment is put on I guess, but that price tag is insane!

2 primitive forms that intersect with a couple of chamfers. What did the designer do for the rest of the day after this CAD was done at 10am?

I always feel like their products give that “hey, thats neat” but I never feel like they solve a problem I actually have, certainly not at the level where the premium they ask for would be a value proposition I would buy into.

I’m guessing that the super-short barrel obviates the need for any angle on the handle, or other ergonomic-related form development. Body care stuff seems like it should have some formal relationship to how its used. (Gillette Sensor women’s razor for one example).

If I had hair, I’d buy it. I like the simplicity and that the tech speaks for itself. Restrained for a dyson product. Their vacuums are ugly as sin (but work). Nicest hair dryer on the market, easily I’d say. Happy to be proven wrong, but most are all wavy and over older “ergo” grip nonsense.

I can’t help but think of Braun. They’ve had some nice ones over the years.

Not shown below, but I had a Braun that reminds me of the Dyson. It drew the air in through the handle too, with an axial fan even! It didn’t have a huge air flow though. 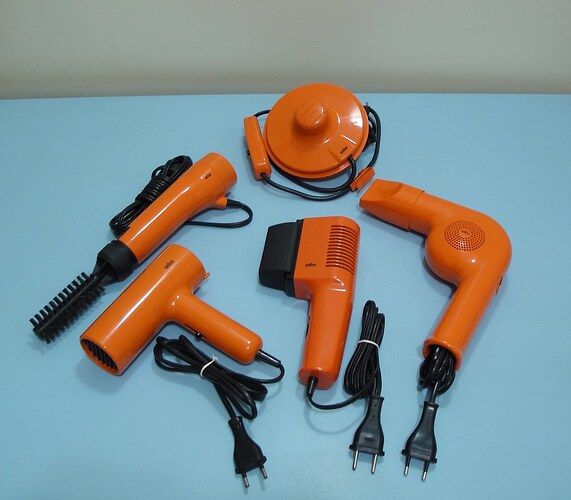 Richard is right though, most likely the best option on the market. For some reason most of them are just terrible looking. I smell a design challenge.

There is a reason they sell for $30 at Wal-mart. It’s a commodity item. All of them have the same design brief: create a really cheap envelope around these components.

I guess there are enough people looking for anything nice that they will drop $400 on one instead of $30 every year. More power to them.

That Braun model at lower left is much nicer. Nothing visually obtrusive. Power cords were challenging in those days I bet.

I guess a lot of the cost is in the re-engineering of the internal components and impeller…there’s a science behind it, selecting the right motor/impeller design.
I love the look. I don’t think it would sell for that price looking similar to the rest. Also, a cylindrical handle is perfect for the use since most people hold it in many different ways to reach different parts of their head, kind of like electric toothbrushes. Maybe it could be designed “more ergonomic” if it was for a professional hair dresser that is standing and drying someone’s hair able to walk around the person rather than twisting their wrist to reach different areas.
$400 is a lot but hey, if you use it everyday to make you look good I think people would spend it. Also if it works better and is less noisy then it would be a big plus. Heck if it is quieter I would buy it for my wife. I wonder if it’s a coincidence they released it a week before mothers day?

I think the reason I have a knee jerk negative reaction to Dyson products is jealousy. I pitch stuff that is way more sensible than these products and get shot down. I think I’d be fired if I pitched ideas as left field as theirs!

I smell a design challenge.

Generally, I have been pretty impressed by the tech and the signature form philosophy from Dyson.
Especially when I see their hyper-stylized product presentation.

But then I see it in my local housewares store and am frankly mortified by the molding and overall built quality.

Haven’t seen this in the flesh, so I don’t know how this one stacks up but considering it’s a handheld product, hopefully it looks and feels as nice as it does in these heavy PS renders.

I posted an idea in the doodling forum

I’ll set up a separate little thread for it.

But then I see it in my local housewares store and am frankly mortified by the molding and overall built quality.

The visible mold flow knit lines due to using that crazy metal flake-infused plastic is what has dragged down some of their earlier vacuum products. There’s an overall plasticky feeling to the products too, but as long as they work and I can get replacement filters I’ll be a repeat customer.

we are a Miele family over here. My wife couldn’t get past the buck rogers feel of the Dysons. The Miele’s just feel more tasteful… that and the ratings on their HEPA filters sold Kristina.

I have a Kenmore branded Panasonic. I find it pretty good.

Yeah, I spent a fairly good amount of time researching “the best vacuum”. After reading countless reviews and watching comparison videos I got tired and just went to Best Buy and got a hoover or eureka for $130 or less. I got tired of all the “this is good for floors but not carpet” or “good for low pile carpet but not for shaggy carpet”, “this one can pick up rocks but not fine dust or vise versa”, etc.
Sharks got really good reviews but felt like plastic toys. I liked the look of Electrolux vacuums but didn’t want to go by looks only.
So far so good.