I like the idea and think it’s brave Dyson have launched a product that finds fault, and will surely detract sales, from one of their existing products.

Having said that, James Dyson is a fan of the “fail often and quickly” way of thinking. I’m assuming that like the wall-mounted Airblade this too doesn’t heat the air, but relies on air-speed to quickly dry. All well and good, but I do prefer drying my hands under hot air.

First impression was I couldn’t understand how it worked. Clicking on the link and scrolling down showed that the air comes out of the side ‘arms’.

My office building was recently refurbished and all the bathrooms got airblades. Apart from the inital excitment nobody uses them. The preferred option is paper towels as they are arms length away, whereas the airblade is across the bathroom. Paper towels are also preferred as (considerate) people dry down the sink benchtop after use, when you walk over to the airblade your hands drip.

I think they’ve created a really interesting solution that’s visually appealing and probably deals with the water dripping problem pretty effectively. From an architects/interior designers perspective I think they may be on to something. Less visual clutter in the room, fewer products to spec, etc.

From a systematic usability perspective, this could be a nightmare. In a high traffic restroom like a stadium, nightclub, or movie theater. this would be a nightmare. Having multiple “stations” helps keep the flow moving quickly, eliminating bottle necks. You already have to wait in line to pee when a movie ends, now you’ll have to wait in line to was your hands too. It will probably just result in fewer guys washing their hands at all.

On the other hand, in nice restaurants, residences, or businesses, it may be a perfect solution. It doesn’t have to be perfect in every environment to be a good design concept.

No one outside England would integrate the hairdryer into the water faucet.
I hope it isn’t built by Lucas.

Putting aside the fear of high voltage strokes it is a brilliant concept. They
adressed all critizicm for their old product and went even further.

I want to see how this thing is made. I have no clue how it works.

BTW: the air from an Airblade does get heated because of the inneficiency of the motor (friction=heat).

No one outside England would integrate the hairdryer into the water faucet.
I hope it isn’t built by Lucas.

Putting aside the fear of high voltage strokes it is a brilliant concept. They
adressed all critizicm for their old product and went even further.

I hadn’t thought of the safety side, but I’m sure it satisfies all major market safety regs. In the UK at least It will need fitting from scratch though, due to rules regarding the hard-wiring of bathroom electricals, and be fitted or certified by a registered electrician.

I want to see how this thing is made. I have no clue how it works.

BTW: the air from an Airblade does get heated because of the inneficiency of the motor (friction=heat).

There is a short video on the website showing a cut-away sample.

Seems pretty cool, although the one thing that could be an interesting use case/disaster is what happens if the sink is full of water, (either due to the drain being plugged or inadvertently clogged) will the flow of the air spray all the water out of the sink and all over the user/bathroom?

Could be a fun set of fail videos, but I still like the concept. I get geeked out when I go to a place that has the airblade.

Did you see this bit on the Today show?

Neat concept, dunno how well it would work in real life. I can’t imagine the electronics and water would be that much of an issue as there are already IR sensor taps that must have some sort of electricity (unless maybe battery, not sure how they work).

Personally, I don’t like air dryers of any kind. I like at least having the option of a paper towel as I also often wash my head (no hair- head gets oily). Not to mention if I spill something paper towel can be really useful.

Some cool, but short manufacturing process videos on YouTube too.

I always seem to loose that game no mater how hard I try!

Out of all the hand driers, Dyson works the best for me though I don’t like the shape. At least this one looks better.

It’s a certainty they have the restroom electrical safety all figured out. The UK is the most regulated place I’ve ever lived - they would have planned for that. Thank goodness there’s no string to pull!


There’s another one on their website that’s interesting too

Did you see this bit on the Today show?

So don’t have Matt Lauer next to you in the bathroom and you’ll be fine.

They just need to design a sink that is just one huge mesh drain so that no water can build up on the surface and launch out.

Right, so it’s not the products fault, it is just that all the sinks in the world are wrong… interesting 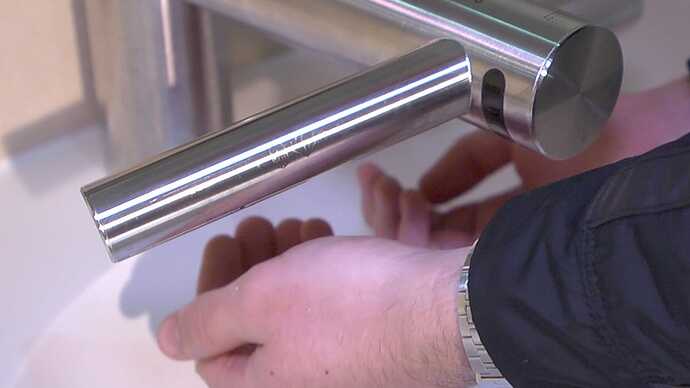 Right, so it’s not the products fault, it is just that all the sinks in the world are wrong… interesting

It is the demo sink, and it is quite tiny.

For 2 grand I’m surprised they didn’t improve the whole system, and have a Dyson sink as well.

Especially with the wee-wee yellow trim. Yellow in a toilet always struck me as a bold choice.

For a demo, they should have had the perfect sink for it. That is the beauty of a demo, you control it.

It’s 2000€!!! &It would freak my mom out. People will still touch the ‘handles’ so no germ transfer is BS.
If he really wanted to re-invent hand-washing after a toilet visit. Why not redesign the doorhandle? So it automatically washes/disinfects your hand while leaving the toilet?..no more cheating.

I used to respect James Dyson in his early days (1st generation cycleone). Now he’s turning into a parody of himself…

I love how morning show hosts get bored after 15 seconds on a segment. Talk about ADD.