does this concern anyone else?

I read a recent article in Road & Track about the end of the petroleum age expected to be anywhere from 25 years to 95 years in the future.

After considering how this would impact the transportation of millions of people and countless supplies/products, I inevitably think of how it will impact the plastic industry.

Is the end of petroleum ago not a greater concern for plastic as this is so much more integrated in our lives than automobiles?

It may be worse than this and it should be a big concern to everyone. There are other reports that it’s not 25 years away but more like now. This is also the big reason why the White House leak of that CIA operative’s identity last year is a big deal even though no one really talks like it is; she was operating inside a dummy organization that kept tabs on this kind of stuff. When her cover was blown by some idiot playing politics for Bush, it also blew the cover of the organization she worked for in the Middle East and which had undercover agents keeping track of things like oil production in places like Saudi Arabia. Without those agents in place the U.S. doesn’t have a window into whether or not peak oil is still years away or happening now. We just don’t know anymore. All we have is the word of people no one really trusts and who could use this information to manipulate markets.

There has been some speculation that Wall Street is really pissed about this because oil is so much a part of everything, and all those wealthy investors are having a hard time figuring out what to do and how to invest without this information. Some are even saying that this leak will be coming out before the election because those people want Bush out over what happened. There have been recent news reports about this even though it doesn’t make the front pages. It may actually happen that way. Some people are starting to talk and the shit may hit the fan.

the idea behind this post was not oil for cars. the idea is what kind of an impact will this have on plastics…will they simply not exist anymore, will the cost per pound go through the roof, will it stimulate the growth of “bio-plastics” into the mainstream markets? This is big.

It’s a big deal for lot more reasons than just cars and plastics. Pharmaceuticals to national defense, oil is the backbone of civilization.

This is exactly why we need to clone dinosaurs people! Why won’t anyone listen to me??!

This is also why Doc Brown should have held onto that Delorean!

But seriously-- what does this mean for plastics and industry? Are we looking at a plastics crisis? A massive change starting to move? Or are synthetic or organic alternatives viable and ready to be utilized?

Please recycle your plastics…we will run out of petroleum soon…also, save your chewing gum!

Looks I better gas up my new 5.0 before its too late!

saw interesting development in the bio-plastic field. bacteria that eat styrene exhaust(?) another plastic. medical-grade stuff. possible that all things styrene will be converted this way. think its a UK company. expect more of this. but may be a few years before more plastics can convert over this way.

dont know about dinosaurs, but i say we dig up all the graves and convert humans into oil. a little heat. a little pressure. oila! better than Soylent Green…

transportation, oil, and plastic have a long history together:

do we need oil for transportation? hail no. 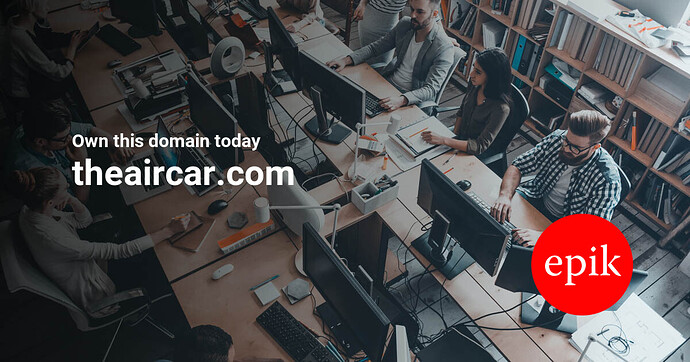 theaircar.com domain is for sale | Buy with Epik.com

theaircar.com - Make an Offer if you want to buy this domain. Your purchase is secured by Epik.

but we do need oil for plastic. i’m thinking soy is looking good. due for a new cellphone? just eat the old one.

unless of course it’s made from this stuff:

Correct me if I’m wrong, but I’m recalling from some long ago history museum visit that henry ford used soy based plastics for interior parts of the model T. I beleive even the tires where soy based. They probably sucked though.

Just like fuel, petro based plastic alternatives are available, but the relative low cost of oil for the past 60 years has stunted the growth of other technologies. In inflation adjusted dollars the price of fuel in the US is not that much different then in the '50’s even though federal taxes are higher on that gassoline. If you take out the tax a gallon of gas is like $1.10!

So it is your patriotic duty to the environment to go out and purchase a new Fullsized Ford Extruder or Excrutiator or whatever, and burn up oil faster. It’s the only way to spur the developmet of alternative fuels and materials. Just think, every time you peel out at a stop light, we are one step closer to the change over!

Yo:
You are thinking exactly the way I am. Nothing will change until there are no alternatives left.
So I am going for an extra long drive in my 5.0 tonight, in 1st gear!

So it is your patriotic duty to the environment to go out and purchase a new Fullsized Ford Extruder or Excrutiator or whatever, and burn up oil faster.

More stuff you make you mad:

Bush’s campaign manager was on NPR this morning saying that Michigan (a battleground state) should be against Kerry’s demand for increased fuel efficiency. He claimed over 100,000 detroit jobs would be lost as a result of Kerry’s policy. (Look for “Helming the Bush Campaign” on this link.)

“The Bush Administration energy plan ignores high-tech, energy-efficient solutions in favor of increased oil, gas, coal, and nuclear production, while his budget proposal slashes funding for renewable energy and efficiency by a third.”

“The Energy Department projects that the U.S. will increase its dependence on foreign oil to 68 percent by the year 2025 – up from 55 percent currently. Bush’s response – proposing drilling in delicate lands in Alaska as well as various national monuments and public lands.”

"Vice President Dick Cheney has gone all the way to the Supreme Court to block efforts to find out details of the energy task force he headed. But some general information on its proceedings has become public. Nine days before Bush’s inauguration, energy industry lobbyists gathered in the American Petroleum Institute’s offices to make a “wish list” for the Bush energy plan. The list was forwarded to the Bush energy transition team and eventually to the energy task force. Task force officials met with 118 energy groups, and only 13 environmental groups, five academics and one consumer group. The Washington Post reported: “A first review of the 11,000 pages of documents bolsters the contention…that the Bush administration relied almost exclusively on the advice of executives from utilities and producers of oil, gas, coal and nuclear energy while a White House task force drafted recommendations that would vastly increase energy production.”

“The Bush Administration supports the House energy bill, which includes energy industry tax breaks and subsidies costing $23 billion over the next 10 years. The energy bill provides billions of dollars in benefits to companies run by at least 22 executives who have qualified as either “Pioneers” or “Rangers,” individuals who raised $100,000 or $200,000 each for Bush’s re-election campaign.”

I read a recent article in Road & Track about the end of the petroleum age expected to be anywhere from 25 years to 95 years in the future.

Google “Peak Oil” for everything you want to know about these theories.

Oil production has peaked. A good resource is Le Monde Diplomatique from July.

Plastics will surely be hit within the next 25-50 years. At a minimum, new technologies will have to be developed, but perhaps the days of “disposable” products will be over. Certainly products and pharmacuticals are so important that it is a major waste to burn any oil!

On a little side note though…the Pennsylvania oil rush began in 1859. For those who don’t know, PA was where oil giant Rockafeller got his start (Standard Oil - now known as Amaco and I think a few others). In those days they wasted alot of oil and were unable to extract it as efficiently as today…but oil has supplied us with energy and products for 145 years. The bad news is that oil demand is rising at 1.9% per year (on another side note, last year China used 55% of the world’s concrete).

To move this into global realm, today the Arab countries only supply 25% of the global oil. This is because the US still has extensive reserves, as well as those in the North Atlantic, Venezuela, Canada, Russia, Nigeria, etc. Unfortunately, we’ve been drilling oil in the US for 145 years and we have almost exhausted the immense supply. In 2020 the Arab countries will supply 41% of the oil.

Politically, I don’t like Bush, but then again most politicians are a sore disappointment for me. It is understandable why we are occupying the country with the second largest oil supply and also have set up a puppet regime that will soon be home to an oil pipeline from Russia. The only problem is, we’ve just changed the question from if to when.

but perhaps the days of “disposable” products will be over.

It’s funny, your comment made me think of drilling for plastics in our garbage dumps 100 years from now…

Wasn’t the concept of a “100 year car” introduced in Neal Stephensen’s “The Diamond Age?” I think it was really expensive, but was mortgaged like a house. Of all the thousands of car concepts generated every year, has anyone seen such a concept?

OK,
First, we’ll never run out of oil, by the time gas costs ten bucks a gallon there might not be much left but nobody will want it.
Second, only a couple percent of what gets pumped out of the ground today gets turned into plastic so even if we still need to make plastic from petrolium, there should be plenty (especially if its in recyclable forms).
Plastic is King - long live the King!

It’s funny, your comment made me think of drilling for plastics in our garbage dumps 100 years from now…

Even more ironic, I was thinking of drilling for plastics in land fills when I was writing it! Perhaps when we have the technology to recycle ABS or thermosets we will be drilling for them. Although, as guest points out, use will probably decrease as price increases.

Guest is correct, only 2-3% of all oil production is used in the manufacture of plastics. Also, recovery rates of oil by primary methods (pressure of the oil in the ground) is only about 20-23% at best. The very best (and expensive) secondary methods raise that recovery rate to only about 45% at best. More than half of all oil gets left in the ground, currently unreachable! When speaking of oil reserves, its the recoverable amount that is referred to, not the total amount.

Perhaps in the not to distant future some brilliant engineer may discover a method of getting another 30% or more out of the ground. That would keep
the oil based ecomomy moving along for another hundred years or more. As to wether we want that or not is another matter, but I dont see the death of plastics in any predictable future.

Mulletstyle:
Don’t go getting your mullet in a knot over this. The Japanese are already(like usual) miles ahead of us:

This is where the future of plastics is headed. That is, as long as our cities don’t sprawl over all the Agricultural land required to grow the materials for plastics!