Without being too crass about it, does sex sell? Is it too bold to put beautiful people in provocative poses (completely design related, of course) to sell a concept or product to a client?

something like this is a bit kitsch, but i think there are some examples out there which can be tasteful

Post any images or videos which are appropriate. Has anyone ever put a cute model in a rendering? Or maybe shown a product in a slightly different way? It would be interesting to see where this goes.

I’m sure there may be some situations, but I am going to go with completely inappropriate for trying to promote a concept in a client meeting. The only s3x in that type of presentation should be a s3xy slick rendering. A scantily clad woman, or man is probably going to offend or put someone else off, and your concepts should be selling themselves at this point.

This sounds familiar to me for some reason.

I think this might be one of Zippy’s renderings: 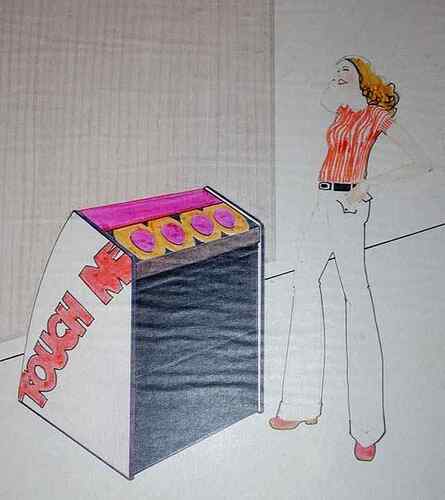 It’s strange. I’ve started a bit of an inspiration bulletin board at work. The thing that the most people stop to look at is a Kohler brochure that has a beautiful model (although fully dressed) on the cover. Maybe I need to find more pictures of sexy women holding products to get my co-workers pumped about design…

To a client? No. You want to sell the concept, not an ad.
You can add a person to your rendering if that’s relevant, but it shouldn’t be s3x driven (edit: unless it is s3x-related).

I used to do this all the time in school. And I think it worked.

From my perspective now, I think the suitability of selling with s3x depends on the product and who the presentation is to. A presentation or any design concept is about not only selling the design/product, but also the story that goes along with it. If s3x is part of that story, or the lifestyle concept for the product, I don’t see what’s wrong with it.

That being said, the s3x shouldn’t overpower the design, but should be used as a tool to sell the design. It’s really no different, IMHO, than future-y syd mead renderings that get you into the context/mindset of the product presented.

i remember some discussion on here forever ago that somehow involved this topic, one point made was that your model’s appearance can greatly detract attention from your concept.

here are two examples from toyfon.com that come to mind

this one is may be too much for some clients, but by and large I think is completely acceptable

+warning the following image may be offensive to some, but I believe it to be entirely appropriate and relevant for this discussion+


this one, is way over the top if you are talking about pretty much any client, but I can see it as a poster on a teenager’s or college kid’s wall and I think also works as raw imagery and personality

Most likely not a North American ad?

allways has, allways will…end of thread (except for more s3xy adds that is).

I think this might be one of Zippy’s renderings:

It’s strange. I’ve started a bit of an inspiration bulletin board at work. The thing that the most people stop to look at is a Kohler brochure that has a beautiful model (although fully dressed) on the cover. Maybe I need to find more pictures of s3x women holding products to get my co-workers pumped about design…

one of MY renderings, I only use charcol, renederd animal fat and iron oxide on stone walls…

I thought he meant during a presentation to higher ups or clients, not car adds and such.

Damnit Zip, you beat me to the renderings of stone wheels on a french cave wall joke I was going to make at your expense today, I was even going to sketch up some little images and everything. My boss takes us out for a boat ride all afternoon, and I miss my opportunity!

I think subtlety could be good, so that one above is probably too far. I was thinking more along the lines of using female (or male) curves to balance a good concept or design. Kind of making the image a part of the rendering/video.

IF your presentation shows someone using the product, may as well make it a sexy someone…

There are some very tacky Tom Ford perfume adverts around, i’d say that is a good example of shock value as opposed to style.

I think it’s obvious that s3x sells. The only thing is, it mainly sells s3x, and the product is usually an afterthought.

yes i prefer b cup’s

thats why I get out of bed in the first place to go to work. Sex and motorcycles.

I want to buy a chair now.

thats why I get out of bed in the first place to go to work. s3x and motorcycles.

You’re a gigolo moonlighting as a motorcycle mechanic?

If anyone finds a good example of this done tastefully, post 'em up! Whether it’s from a magazine or or blog, even a folio. I saw a good pic on coroflot the other day, but don’t remember the name. Maybe that says something…

A lot of people view David Beckham as a nice looking guy - i think this has DEFINITELY helped raise the profile (and sales) of the Motorola V8 luxury edition. His name is not mentioned anywhere in the ad, but people still would ask about the ‘david beckham phone’.

Opinions?
I’d like this thread to become a sort of treasure trove of images and films to use a s source for all, maybe some good examples of models in product shots too.