these are some contemporary dinnerware designs i developed, i’d like to hear what you think of these… 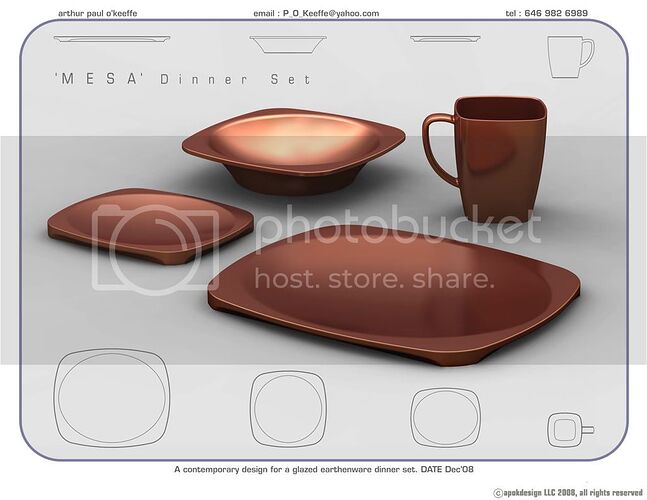 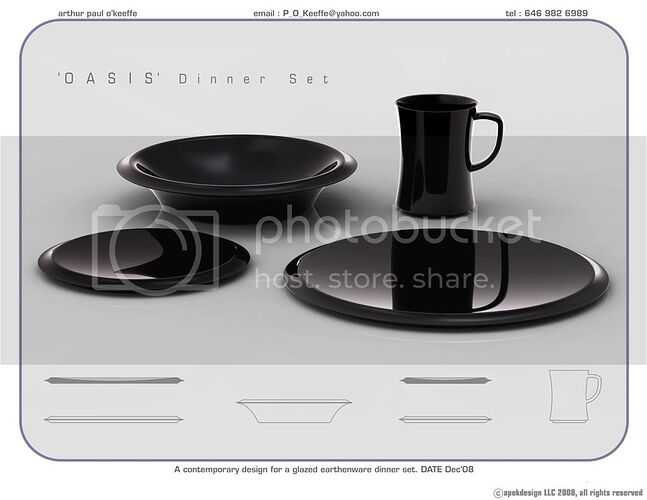 hey nice rendering man, i will give some feedback though.


the firsts set i don’t respond well to. Its the plates that are my main concern. they are visually heavier than than the mug or the bowl. perhaps it’s because they are grounded at the edges wheras the bowl has a rim. also - and this is a personal thing - i just don’t like drinking out of square profile mugs. stacking is a concern here too i think.

the second set i respond to better. however the plates still have that grounded - heavy feeling. how am i going to pick this plate up off of the table? it should be easy to do with one hand. it just doesn’t look like i can fit my fingers under the rim. i like the bowl. and i like the concaveprofile on the rim. the mug is better than the other mug. Could you play with the minor dimension’s location though? right now its thinest in the center of it’s height… what if you dripped it or raised it a bit? I see how the profiles are intended to echo each-other, it looks better overall than the previos concept.

keep it coming… did you enjoy working on this project?

I feel as if the first one looks a little dated. The second one I like a lot more, but I wonder if you wouldn’t need a two-part mold for the plates, which would make it a lot harder to produce.

I would question the choice of material. Why earthenware?
A porcelain would make the pieces look a lot more elegant. Especially since the design has a slightly heavy, chunky feel.

thanks for all of your comments !

jg: the plates in these sets are deliberately designed as low profile. they do have cut out areas underneath them for handling. there is some heaviness’ to the design of these plates, especially the ‘mesa’ plates which are not well suited to stacking. i’m not sure i understand the ‘minor’ dimension…? i am having a lot of fun with this project, i’m looking at a lot of different existing sets and trying to produce something simple, modern and different, even at the cost of them being a little heavier.

bepster: i choose earthenware for the first set (mesa) because i wanted to reveal the natural terra-cotta colour of earthenware in the set with a semi-gloss glaze. also, earthenware is typically cheaper than porcelain. porcelain could be a good choice on the second set since it is also a lighter material and it might help accentuate the rim profiles. another of the main reasons for choosing earthenware is that it is cheaper than porcelain and there are no real ‘details’ in the design that require the accuracy of porcelain (porcelain is very good for accentuating small pattern and texture details).

jg: the plates in these sets are deliberately designed as low profile. they do have cut out areas underneath them for handling. there is some heaviness’ to the design of these plates, especially the ‘mesa’ plates which are not well suited to stacking.

yeah, i wouldn’t use the mesa plates. simply because they don’t function as well as the fiesta-ware in everyone else’s kitchen. they’re are different, yes, but at what cost to their function…

i’m not sure i understand the ‘minor’ dimension…?

OH, right i was a little unclear there. i was talkoing about the mug. so, it’s like a cylinder right… and the cylinder is sqeezed at the center of its height. maybe it would be more interesting if the squeeze (minor dimension) was closer to the top, or closer to the bottom of the mug. putting it in the center is sort of like putting a black dot in the center of a page - its not as visually interesting as if you put the dot closer to an edge… not sure if it will actually work just thought you might want to play a little with it…

i am having a lot of fun with this project, i’m looking at a lot of different existing sets and trying to produce something simple, modern and different

yeah that different thing is going to be the hard part. - i think everyone has there own set of values for what they beleive to be an acceptable “plate” or “bowl” or whatever… and you’ll have to figure out how far across that boundary you want to venture… keep it coming man.

I LOVE the idea of contemporary earthenware!

But I echo some of the others comments of balance, weight, etc.

The color of the first is very appealing as it looks like contemporary terra cotta.