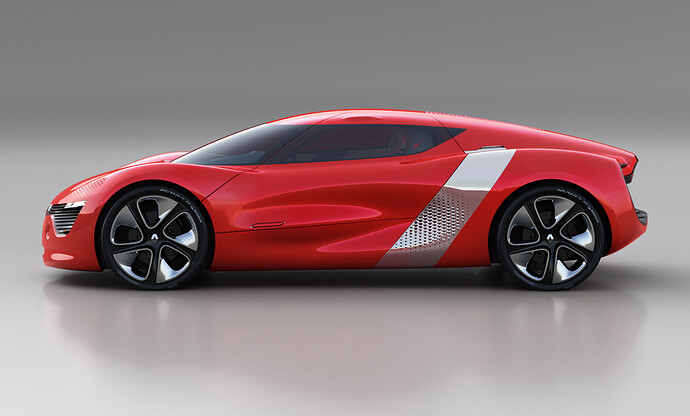 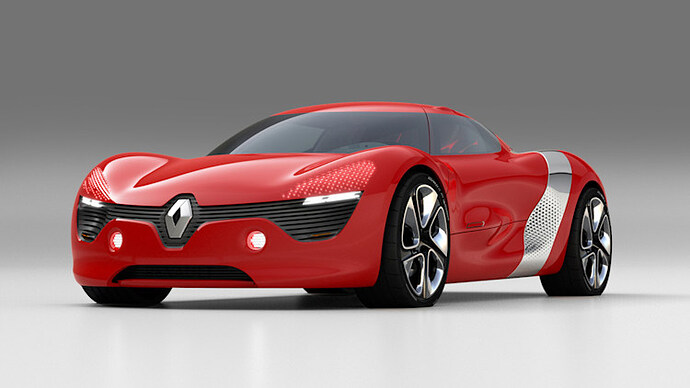 I like this thing, but it’s so oddball. I don’t see any recent trends here. It looks like '80’s (especially the horizontal slats on the back) meets '50’s curves. Thoughts?

Thats a pretty hot car. Cant say that it screams out renault to me. However, my knowledge with the automotive industry is limited.

Two things that threw me of. The Chrome insert on the side made me think immidately of Audi r8.
And the front grill and headlights gave me SAAB vibes.
(from only seeing the sideview )

Cool fluidity of the overall car, like the audi type C.

Have to say I have mixed reactions to this one. I will definitely agree on the chrome detail being inspired by the R8. The form on the side panels reminds a lot of the north american designs of the 90’s with the ford taurus I think it was, kind of had that bubble effect happening. The front grille is a little confusing, I am not excited about the outline of the black intake area, but love the effect of the led lighting through the body work. I could see this trend catching on. Looking now at the back of the vehicle I can see elements of the Audi R8 again mixed in with the mazda crosswinds concept car.

The overall stance and colour have the flavour of the Alfa 8C as well. Its a mixed bag of emotional responses, overall in my opinion its a little confusing to get an overall feeling of the concept behind the design. Then again, I am a little conservative and have always had trouble digesting french automotive design

I think I really like from about half of the door forward. If I cover up the back half I really like the transitions and forms going on there with the hidden A-Pillar, the little blip over the greenhouse, as mentioned the LED lights. There is something maybe a touch incongruous in the back half to my eye from these pictures, but it could be one of those things that is totally hot in person. That has happened so many times for me.

Yes, there is some R8 in the proportion and the metal panel, but I think any contemporary car with this proportion has to at least be aware of that car. Overall, it is a pretty different car.

I like were they are going with the front end graphic, and if this is a new direction for them, it could be a great down road graphic to apply across their range. I gould easily see variations of the DRG on sedans, cross overs, compacts and coupes.

I’m glad someone is going back to organic (was it the Ghia concept from the 90s?), I’m so tired of everyone bastardizing the flame surfacing we see everywhere nowadays. My favorite part is the rear, with the slats and this future, daft-punk retro vibe going on. Its different for one. An interesting concept to say the least, and i mean it in a good way.

I wonder what those perforations along the side sound like at 100mph?

Nice wheel design, too. They could have really gotten wild there, but they actually seem a bit restrained compared to the rest of the car.

Other than that, that’s a wild wild car.

I agree with NURB. I’m lovin the perf panels. I think it’s awesome how they added the perf to the front end and how they blend with the headlights/grille.

The wheels are pretty hot too. I wonder how they would look with the some added dimples/perfs to match the body more?

For some reason the rear end doesn’t work for me… I think it’s the side profile that ruins the rear.

I don’t care for having the doors open in different directions. Symmetry is such a beautiful thing sometimes. I would love to see them stick with both doors in the gullwing/suicide configuration.

This concept is definitely wild. I want to see how it translates to real life.

The more I sit with it, the more I like it. It does have a bit of a 90’s thing going on in the door panel form transitions, but it is handles in a contemporary and fresh way. I think it is working. Would love to see it in person.

I don’t see a typical Renault theme on the whole car. Could be any teardrop shape from the
nineties.

What puzzles me is that these side gills strongle remind me of a “designer”
citrus grater, that I can’t find a pic of right now. Something like that: 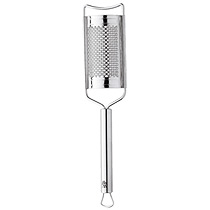 Keep in mind that the main competitor for Renault Europe is Citroen. What an elaborate
joke they made there…(if it was intentional)

I think it’s a rather lovely looking blend of 9o’s curves noughties tech. Overall I’d say it has quite a product design feel about it too - Details like the grilles and lighting perfs make me think that an alienware pc has mated with a car

The asymmetric seat graphic looks pretty dramatic when viewed through the windscreen - it reminds me of some scratchy blood splatter or something!

pics of it on the actual street: 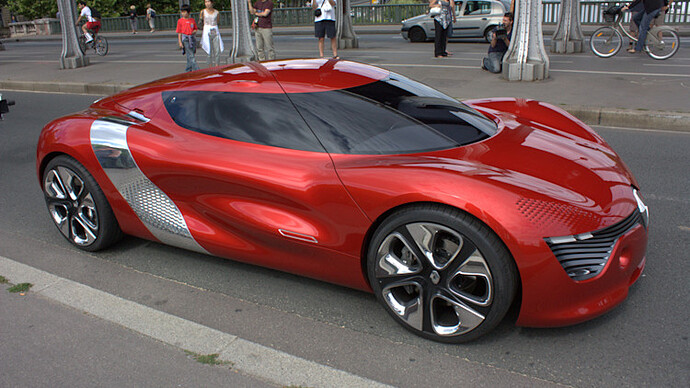 pics of it on the actual street:
Renault DeZir concept in Paris Photo Gallery

To quote the great Philip J Fry, “fuuutuur-ific!”
Overall, i like it! Doesnt feel totally there yet, but its damn close.

That chrome piece looks awful. Also wish that the hole in the rear was a bit thinner, it does steal too much focus being that big with that much going on inside it in terms of detailing.
Another thing, im not too familiar with supercars, but are they generally this short/stubby?


Whats going on with that Batmobenz in the background?

The vehicle in the background is a camera car. It was out on a shoot. It’s flat black to control the reflections on the car it’s filming.

I think it looks stunning. Supercars are not short and stubby. They are normally long and sleek. This is a design exercise though.

i haven’t read all the replies yet, but my knee jerk reaction was that its really nice!

audi R8 meets veyron… form a side profile at least.

pics of it on the actual street:
Renault DeZir concept in Paris Photo Gallery

can someone please put some wider tires out back on that thing! haha. what are those some 235’s???

it is pretty crazy looking in real life… i could nitpick it, but its pretty nice and fresh looking to me, once the get the right tire width and wheels where they dont look like hubcaps (seriously, are those hubcaps on the closeup shot?).