Some recent sketches to share, from the latest hummel Indoor developments.

The design exploration is working on a new fit system for this Indoor shoe, which is a multi-part integrated design concept, focused on Fit.

The design uses a similar customizable sockliner that can be heated in the oven to fit to your foot. The sockliner has a large heel cup, which fits into a translucent TPU heel counter so is visible from the outside.

Cemented to the bottom of the sockliner is a TPU shank which provides stability. This shank clicks into a part in the CM EVA midsole, and is visible through a hole that goes all the way through the outsole/midsole.

A pretty complicated construction, with some difficult engineering, but all works in the end! 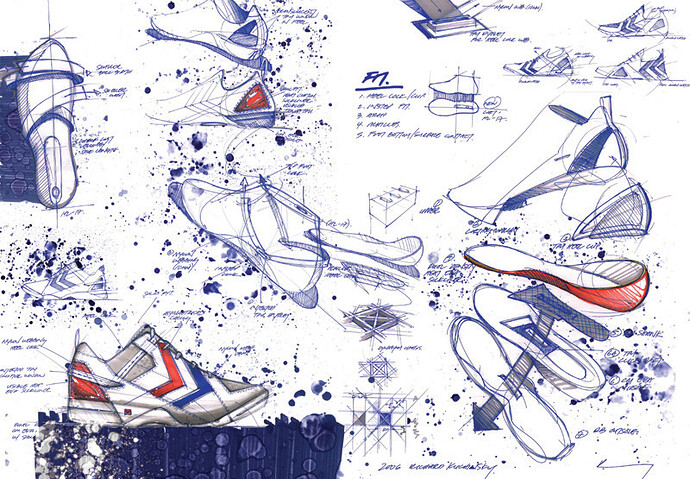 
The final product is pretty much just like the concept here, and ill post some product shots soon.

This, plus more development pics (pullovers, samples) will be in our latest (FW07) Indoor presale catalog, and I’ve got a few more to share on my blog,

Really like the sketches, good idea as well, must have been a bit of a nightmare to produce.
Could we see some early sample stages “Please”
Reuben

Really like the sketches, good idea as well, must have been a bit of a nightmare to produce.
Could we see some early sample stages “Please”
Reuben

The shoes did require lots of late nights working in factories with mold makers. One feature, the clickign fit of the shank to the midsole involved me trying to explain my idea by demonstrating the clicking fit of a pen to a pen top. For 2 hours 10 Chinese Moldmakers were clicking pens tops on and off!

Wish I had video of that.

That sounds like it could be made in to a good advert. made me laugh,

the clipping is so that you can remove the heat molded insole.
but so it wont move.

That sounds like it could be made in to a good advert. made me laugh,

the clipping is so that you can remove the heat molded insole.
but so it wont move.

Ya, the insole clips into the midsole to provide a postitive fit to help transfer the energery from insole to upper and midsole/outsole. With the click sound, it is a positive affordance so you know its in place (it requires a bit of force) so you have the confidence to know the system is ready to GO!

Ya, the insole clips into the midsole to provide a postitive fit to help transfer the energery from insole to upper and midsole/outsole. With the click sound, it is a positive affordance so you know its in place (it requires a bit of force) so you have the confidence to know the system is ready to GO!

Where is the clip relative to heel strike? i.e. is there hard plastic directly under the heel and how do you keep the heel from feeling the snap mechanism?

I imagine I will probably have to wait until the pics are available.

as you can maybe see in the exploded view drawing, the clip in underneath the center of the foot. There is a projection on the shank (that is cemented to the sockliner) that goes through a keyhole in the waist. this provides additional stiffness in the waist, and also keeps it out of the way of areas that flex so it wont pop out.

In our tests so far, the snap fit clip system works well, and by having it visible through the bottom of the shoe not only looks good, but also makes it easier to pop out. you just need to push you finger onto the shank projection that is easy to do from the bottom given the hole in the midsole and outsole. its like a big, easy visible button, almost.

its not the easiest to take out, but really you only need to take the sockliner out once, when you buy the shoes, to stick it in the oven for customization. after that, there is really no reason to take it in and out, so there isnt lots of stress on the parts or difficulty in use (unlike some other customization things which get fiddley and a pain in the ass to do on a constant basis.

Ah…gotcha. The snap is under the arch of the foot. That makes sense. I can see how that would be a bit tough to get out.

I am kind of getting lost as to what detaches, but I think it is a very interesting idea. You intended it to only be done once? Don’t you think that was a lot of engineering if that is the case? The idea of customization is awesome. I think that maybe as the shoe wears you may need another insole as it loses its form? Have you done any long term testing? I am guessing you have.

Another thing I noticed was the proportion of the final rendering at the bottom left. These are indoor football(soccer) boots, right? To me they kind of look like cross trainers. Just my opinion.

Thank you so much for posting your work like this. Very inspiring for everyone us all.

Thanks for the feedback everyone. It was really a very exciting project, so I am happy to share.

it is a lot of engineernig, but to combine the two ideas (heat sockliner) and (integrated sockliner) it needed to be removeable and also fixed. The solution I think is at least pretty elegant as it works with existing parts that just have special design and features. no need for any screws, bolts, extra bits, tools, etc. In my mind, things like this can be good ideas but in practice ruined if its too engineering and unnecessary.

I remember one concept that was done at my previous job well before I was there (early 90s i think) that was a customizable running shoe. It had a TPU cage of sorts built into the heel area, and you had to pry it open with a special tool to get out the different EVA midsoles (you could choose different densities medial and lateral to compensate for weight, pronation, etc.). Was called Power Anthro. (google it, i have no idea what will come up). A great idea but sooo hard to use it was a complete flop. On trying to open it once, I even cut my hand with the tool that was like a giant plastic guitar pic.

PS. Its indoor (handball), not indoor football, hence the proportion of the rendering at bottom left

PS. Its indoor (handball), not indoor football, hence the proportion of the rendering at bottom left

I would imagine it would work well for squash and racquetball also?

I guess, but typically squash and raquetball (and volleyball) shoes are much lighter weight and more flexible. Handball is more like BBall, but even more physical and fast moving, also with some physical contact that really beats up the shoes. Hence the idea to create more motion stability and control.

Is this a presentation board? Straight from the sketchbook? Scanned and assembled in PS?

I like the feel of it, but curious about where it sits in your design process.

This assembly of sketches are a bunch of scanned sketches and renderings assembled in PS. No other coloring/rednering/cleanup is done in PS, just added the ink splotches though for effect.

My usual process is to work on looseleaf sheets of color laser paper with a pen and sometimes a few markers. Im not one for a sketchbook much. Too much intimidation that the drawings gotta be good to keep inside. On looseleaf, if it sucks, i trash it. plus I often turn the sheet over and draw in reverse over a drawing for a change in perspective, or to revise a design on a good proportioned sketch.

Most sketches are very quick. Got not much patience for rendering. This selection of sketches incl. the one quickie render would probably be an hours worth max (incl lots of others that i junked or didnt include, and some guideline underlays for the exploded shot).

those are some jaw dropping sketches. they are eerily beautiful to look at since the added effects kinda remind me of that intro in SE7EN.