I’ve been slowly losing interest in my last project, as I find myself shifting more into the “software” side, with features and bells and whistles and what-evers. I don’t want to be a software engineer. I want to be an industrial designer for Christ sake! Why am I worried about creating an ecosystem?! I have no idea. So, here is my slap in the face to wake up.

I’ve been pondering the thought of a hinged, detachable computer. All the components (excluding the screen) would be stored in the base. The screen would attach through some sort of locking mechanism (possibly magnets, or something), and be able to tilt back for viewing preference.

That’s just the bare-bones of my idea. I’ve had this idea in my head for quite some time, but never decided to draw it out. So today, I got off my lazy bum and got to work. I quickly did some initial sketches and renderings in Photoshop, so I hope it’s somewhat legible. (Better than drawing it on paper and taking a photo of it! 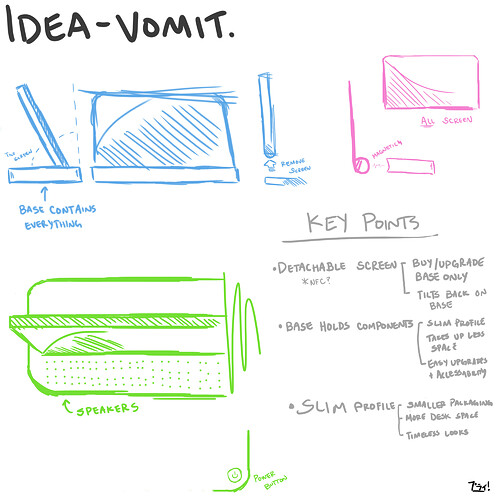 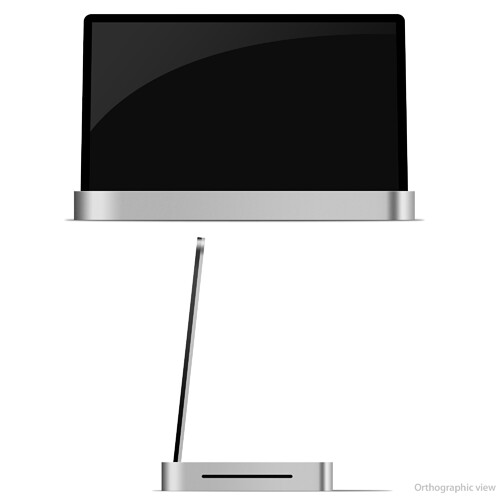 What problem does this solve?
Why are the components in the base separate from the screen - isn’t this just a different form factor for the desktop PC, a dying category for the most part? Are the components costly enough, and does screen technology evolve slowly enough for that to be a real value prop?
With a screen connecting via “magnets or something” how does the video signal get to the screen? Or is this a vaporware thing…
The styling looks very Apple.

To think about so you can improve the concept:
What trends are shaping computing if we look out two years? Seems like you’d want to explore trends driving the move to smartphone and tablet use, how people will use social media, how the cloud will transform hardware needs (for instance game console sales are flat to declining - Onlive, for example, is a web based netflix for gaming, which is in the process of eliminating the hardware), and what role "computing’ will play in their lives, as well as the role of 3D, haptics, and the new generation of interface technology. What about aesthetics? Where will that lead to? Things are shifting. All of this will impact your concept.

Thanks for the response. I was thinking something along the lines of NFC or Bluetooth for the screen. And yes, it is very Apple, and I’m alright with that (they do know how to make some handsome hardware!

Current problems?
• Generally bulky
• Takes up a lot of space on desk

I can’t really think of many more problems, and I personally prefer desktop computing over laptops and tablets. I’d love to know all of your gripes with conventional desktops, and what type of computing you prefer. it would greatly help me further this concept!

If all the components are in the base, what is the purpose of having it detach? Wouldnt the screen be completely useless when in detached mode?

I thought that instead of changing the whole computer when there was an upgrade, you could just replace the box, or vice versa. I thought that maybe the screens could range in sizes, and be interchangeable, but that would probably be a little hard to do with my current render… Possibly along the lines of the pink sketch I made… What do you think?

In my opinion, Rather than a computer, if a phone had that ability it would make more sense. Where you can choose to upgrade which components you need.

You could order the new computer from the manufacturer, and send back the old one to be recycled. The screen could possibly act as a tablet when detached, but a screen 20 inches + would be a little ridiculous… Maybe mountable to the wall, or the “stand” could wirelessly transmit to the screen, which could be taken to another room without all the bulk…

Re the Apple comment, the point is that Apple owns that aesthetic, and that aesthetic is a couple years old. What is your vision for the aesthetic of this thing?

Current problems?
• Generally bulky
• Takes up a lot of space on desk

I can’t really think of many more problems, and I personally prefer desktop computing over laptops and tablets. I’d love to know all of your gripes with conventional desktops, and what type of computing you prefer. it would greatly help me further this concept!

Going back to my earlier post about the necessity of this product, why are you focusing on a desktop when that clearly is not where the market is headed, and is arguably a dying category outside of processor intensive workstations (desktop sales have divebombed)? Industrial design is all about bankable value props. Where is the value for a consumer, as in with trends moving so strongly against the desktop, what does your idea give them? How are you improving their computing experience? Right now, this is a nice Apple-themed styling exercise based on the old screen and CPU desktop combo. Nothing wrong with that if that’s where you’re going, but I suspect it isn’t.

I think you should find a bunch of current articles about the computer industry. Businessweek and Fast Company alone can supply you with 50 articles on the subject. It’s all about mobility, social connectivity, and hardware reduction, and the hardware platform is drifting more and more toward smartphones and tablets, with cloud computing rising up very quickly and supporting the hardware reduction end. Use that information to craft some problem statements for yourself, and start with a clean slate - don’t worry about designing another “computer.” Create solutions specific to the problems you identify.