This speaker system was for my Form Development class this spring. I just finished my first year of design school and I’m really happy with how it turned out. That said, I’d like another critique!

The model is made of two joined fiberglass molds in case you are wondering. 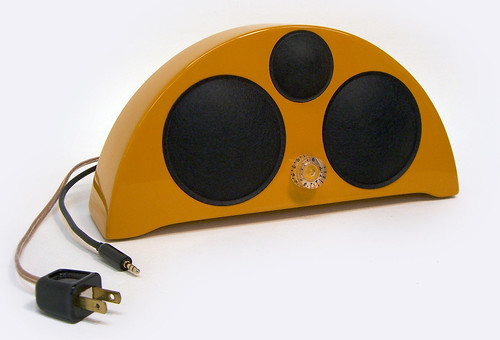 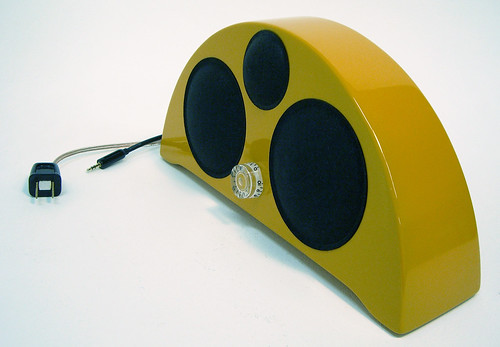 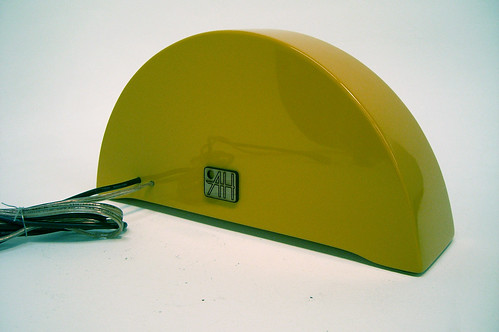 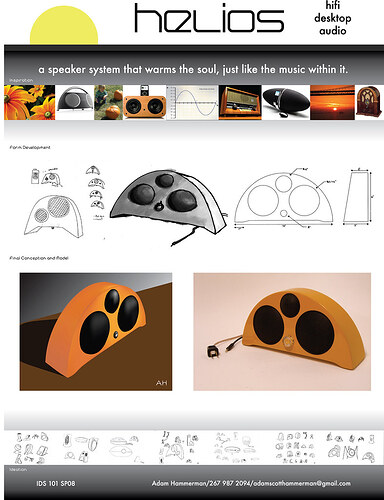 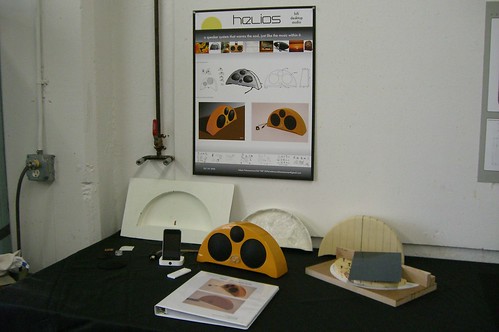 Hey Adam,
I’d work on refining your sketching skills and taking them to the next level. Right now they’re looking a lot more like doodles than serious sketches. Although your final model looks nice, I want to track your decisions through exploration sketches, because that shows me how you’ve thought the project through.

thanks for the feedback!

i know that sketching is my weakpoint. we haven’t had any sketching lessons yet so i’m taking it upon myself to get better this summer. my first real sketching course will be in the fall and i am looking forward to it. so far, we haven’t been taught anything about the design process. it’s merely been fundamental modelmaking, drafting, computer rendering stuff.

but in terms of feedback, i think it would be most constructive if you guys/gals could let me know what you think of my project from both a professional standpoint and also acknowledging that i’m just finishing my first year. that way i can see the whole picture.

first - nice model, especially for a first project kinda thing. definately push the thing furhter though - you won’t be dissapointed.

why the translucent power-cord? seems out of place. Everything else is black. black speaker rim, black audio jack, black plug -

this is a form developement class you said right? what other kinds of interesting forms did you explore during the process of this project and why this one and not them? -
anyways that my two cents, hope it helps.

Thank you for the response.

The translucent cord matches the on/off/volume knob. I didn’t want to add a black knob because I thought it was too much black on the face. I also thought the clear harkened back to some of the retro queues that inspired the design.

I arrived at this form because it matched the vibe I wanted the speakers to portray: warm, stable, inviting. The arc has a constant radius and a combination of the soft surfaces and slanted face make it very approachable and calm. Yet at the same time, it gives a solar illusion, as if it’s rising or setting. I wanted to keep things round because of the dynamic yet balanced nature of a circle/sphere. This is why there are bulbous round speaker covers, a round cylindrical knob, and radiused edges through out.

Other variations I played with included differing speaker sizes, positions, and body proportions. My entire ideation is at the bottom thumbnail bar of the display board. You can see a trend towards spherical/radiused forms emerge. I really need to sharpen my sketching ability and represent those ideas more clearly.

In terms of pushing the design further, that is what I intend to do. It certainly holds true that no work of art or design can ever be completely “finished”. I am going to continue refining the idea through sketches and renderings.

What would you like to see changed or added? Besides the clear cord, what other details add or subtract?

Do you think this speaker system is correctly breaking away from the current speaker product trends, or is it not cohesive enough?

What would you like to see changed or added? Besides the clear cord, what other details add or subtract?

Do you think this speaker system is correctly breaking away from the current speaker product trends, or is it not cohesive enough?

honestly I think you polished an unfinished idea. I would say go back to that very begining stage of pumping out ideas and put as much effort into coming up with as many (wildly) different forms as possible -

i don’t want to be too specific about what i would change, this is your project. take a step back and ask yourself what would YOU change?

What I would change:

I don’t ask for your personal opinion so I can redesign it to your tastes, but because as an amateur design student, it’s very hard to really understand what works and what doesn’t.

interesting first project and nice model from the looks of it.

i definitely see it as quasi retro, sorta like some old time radio. is that what you were going for?

in terms of form development and execution, it looks a bit plain and uninspiring. Something perhaps about the form and proportions, but just seem to offer much in the way of interest. the flat top, very geometic circular speakers, the symmetry…the look has just too much of a primary feel to it, and the sun yellow color doesnt help. in piano black or wood, im sure there would be a much different feel to it.

the back end also looks a bit unresolved to me. for one, the cords come out on the side, while everything else is centered, which is a bit odd. also im not sure about the “feet” you have built into the form.

overall, not bad, but to me the issue it is just sort of hovers between a well executed minimalism (like the apple hifi square box), and something highly stylized. i dont think it needs to totally spacey or crazy, but i have a hard time seeing this working in context of a home, desk or with other audio equipment due to the shape and color.

hope this helps. I’m not trying to be too critical here, just hoping to point out an objective perspective to help.

In no way were you too critical! Thanks much for the clear critique.

I was indeed going for the quasi retro old radio look. In the presentation board, you can see an old radio along with other speaker systems like the Apple Hifi.

It’s hard to tell in these pictures, but the speaker covers are convex. They are made of reinforced felt and raise ~1/2 in off of the surface of the enclosure.

I too would like to accentuate the form more. I was going for a simple, bright, “sun” type shape with a color that is bright and cheerful. Wood finish was a consideration, but not within my means as a model maker at this point. We had to make a primarily fiberglass project.

This is also one of the reasons the back end came out so plain. I originally wanted both faces to be raked at different angles, but this created an undercut in our mold making process. That said, it’s no excuse to not find another method of developing the surface.

I wanted the feet to add upward movement. What could I have done to execute this better?

In terms of fitting in with other AV equipment, It’s meant to be a stand alone unit, just like Bose Sound Docks, iHomes, and Apple Hifis. In the picture of my presentation table, you can see it hooked up to a docked iPod. This is how it would be used.

Thanks for the feedback, keep it comin!

I hope to present a set of sketches and renderings at the end of the summer furthering the design of this model.

For a early project I think its pretty good. The key i have found in making school projects really stand out is details and more details. Look at current speakers and find what they all have in common, adding part lines, rubbing on graphics, logos, or type “on, off, volume…” As far as sketching, keep going, have perspective in mind, and try and be as free as you can, because when you try and be tight it never comes out clean. Dont be afraid of using straight edges, and sweeps, its not cheating, its smart sketching.

Thanks Twills. I tried to add detail by laser cutting the emblem, doing a good job on the cords, and picking a nice knob. I wish I added a parting line/screw holes and perhaps something small and graphical. I consulted with my teacher about a pattern or graphic and I couldn’t find anything I thought actually complimented it.

Haha nice, I think I’ve seen your work in person at school before.

I like the overall radial shape and the continuity of it on the speakers. But one thing that gets me is the top part. I dont think making it rounded would help much, but adding texture to it such as vertical concaved quarter-inch lines, from front to back, or possibly a parting line that you were talking about which could be a quarter-inch from the front and then coloring the back another color would suffice. It’s just to me that the top has no visual appeal.

Also, have you thought of changing up the color of the speaker grills? Because the black really overpowers the orange when it should be the latter. But it could be that the speakers take up at least 75% of the front. I think grey or something metallic… dark grey… stainless…a tone of grey that compliments the orange would probably tone it down but still give both colors a ‘fresh’ look.

As for the back, I think it would’ve been nice if the cords had some type of circular (rubber) border around each of them. Or probably have had them come from underneath so that the cords could be hidden when simply displaying the system.

And then adding another detail such little metallic/silver (same color as speakers) trim (or something else) that would go around the bottom or somewhere. Actually, I think that’s overkill.

But within the time constraints, (8 weeks probably?) and being in your 2nd semester, your final piece seems clean. But don’t take my “design critique” seriously, because I just finished my 1st semester there.

Thanks Tbaker. I am actually kicking myself because the week of the Kick-Ass speaker contest was the one week I didn’t check up on C77…I would have loved to participate.

Rawr, thanks for the words. Perhaps by making the deisgn ~.5 in thinner and making the back panel slightly concave, it will trim the “fat” off and make the flat top less obtrusive. I trust your classes went well? Are you taking product or trans?

good point someone made about the details. i think that might be part of what makes it look more primary and like a model. things like parting lines, surfaces, screw holes, even FCC stickers on the bottom go a long way. it’s those kind of things you dont really notice, but pick up on an almost subliminal level that make something look real.

Rawr, thanks for the words. Perhaps by making the deisgn ~.5 in thinner and making the back panel slightly concave, it will trim the “fat” off and make the flat top less obtrusive. I trust your classes went well? Are you taking product or trans?

I expected the grades that I got from my classes, so it went as planned. And I’m going into product design then maybe toy design in the future. What about you?

I did better than I was expecting, so I’m very happy. I’ll be in product 1 in the fall. Hope to see you there!

I think I am going to work on taking these ideas and creating a 2.1 system as my summer project.