I’ve only recently developed an interest in ID, and I’d be very grateful for any serious critiques of a project I’ve been working on for the past few weeks


I was inspired when I realized I wanted a better way to organize my drawing/painting utensils. The concept is essentially a compact desktop drawer system which also functions as a series of clipboards, enabling one to easily take their tools with them. Besides the actual functionality and design of the product, another focus of the project was to polish up on my visualization skills. You can see some renders on Behance:

Cool project! I really like the concept, though in the interest of constructive criticism here are some things I noticed in the presentation:

First impression, the icons look a bit “puffy”, and don’t really fit with the style of the rest of the project.

Maybe it’s because I’m low on sleep, but it took me a few scrolls back and forth to understand the dual sliding functionality. I was trying to figure out if it slid out the front or the side at first, then realized it did both, then was worried about the “drawers” not being secured well and shifting, before I saw the “rail” action. I like the final solution, but maybe both could be shown at once? Maybe a video would help? I think a detail of the rails would be good as well.

What does the red switch do? I’m assuming it’s a lock for the drawer? I think having it in the shot distracts from the module as well, a separate shot of just the full module by itself would help, where you’ve had to crop it in this instance in order to show the switch. An in-context with someone using the clipboard in a park or something would have a lot of impact I think.

I had originally tried to make the icons flow with the rest of the project, but I see what you mean now. Do you think I should forego them entirely or just try to make them less “bold”? Maybe just some greyscale images instead of icons?

As far as showing both functions at once, I created this image but I ultimately decided not to include it because I thought it might be a bit too confusing. What do you think? 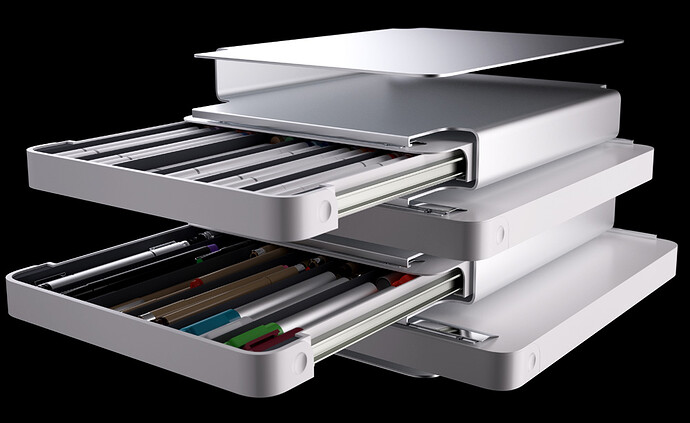 I’ve updated the shot with the locking mechanism (you assumed correctly) to try and show it more clearly and independently.

I also had the idea to have a shot of the clipboard by itself opened up (with pencils and such inside) on some grass, with a graphite landscape or something similar on the paper. I definitely agree it would have the greatest impact in conveying the purpose of the concept - I’m going to get to working on creating this shot (or maybe compositing a render with a photo) soon, I just need to finish up some other (non-ID) projects first.

Thanks again for your time!

It’s a really cool project. I Love the idea and execution. (would buy)

I’m not a master of technical and manufacturing aspects, but I would guess that the structure of the main frame would be quite unstable (edited), and would probably be leaning quite a bit towards the left (reflect on how thick the base for an Imac is, even with a quite balanced center of gravity). It would probably be a quite a complex bending process required as well.

You have a high degree of technical solutions on a product, but I think it would be able to take it down to a simpler level of execution without loosing any of the wonderful features of the product, making it a home run.

I think the icons do help convey the idea, maybe make them a bit less bold, and a bit less rounded. I’d maybe take a screenshot of the front of the sheet metal frame, take it into illustrator, and build the icons with line weight to match the sheet thickness.

I do like the image you omitted, and agree it is a bit busy… but I think it conveys the idea better than having two different images from different angles, so personally, I would include it. Alternately, you could maybe show each function in a different image, but keep the same angle between the two?

What gauge of sheet metal are you using? My first impression was that it actually looked about right for stability, since there’s really not much weight on it, though the bend radius for the rails is probably a bit tight.