I finally finished my new desk. Here it is in all its glory!

Note: this is designed purely to fulfill my personal needs and desires. I wanted something dramatic, without legs and I wanted a project that would force me to use some rusty carpentry skills. In these respects, I’m pretty happy. 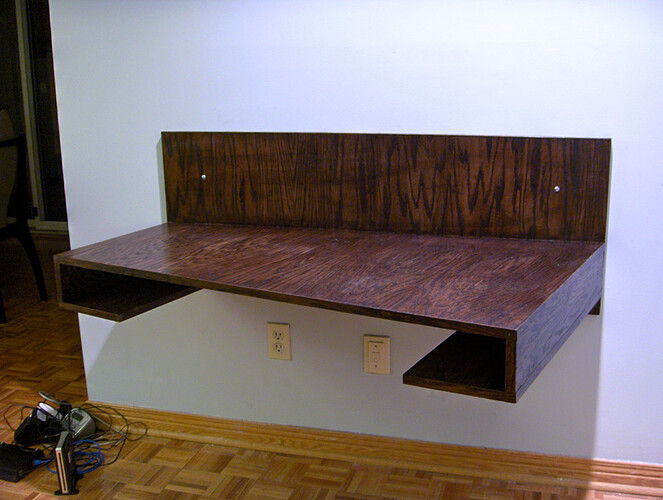 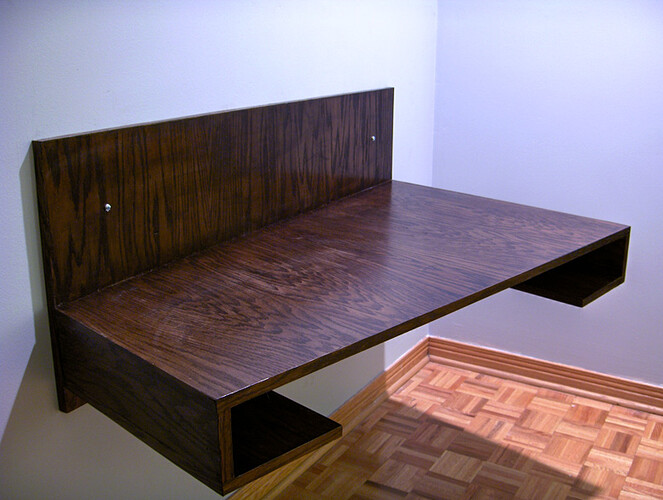 dig the lines and location of the desk, nice and simple.

the hardware is a bit out of place in my opinion- are they rounded Phillips?

think about using something like this, maybe countersunk for cleanliness


I’ve got to get back into a shop and smell some sawdust soon.

Agree, a black hex would be the way to go I think.

I like the angle of it. My brain couldn’t figure out the geometry until I scrolled down to the second photo. Cool desk!

I’m glad it’s not too far out there.

I would like to use different hardware. I’ve been working on it two weeks, so I was pretty tired of working on it. I tried to attach it without visible fasteners, but I just didn’t have the right equipment. Plan B was some round head bolts. Plan C would have been to take my time and find some nice bolts with a hex head.

I think that if you have to see the fasteners, you shouldn’t try to downplay or hide them, I would go with a very visible fastener, embrace the hardware!

or you could sink the head into the surface and plug it with a wood dowel that is sanded flush.

There are also key hole style fasteners pretty readily available that you just router (or chisel) into the backside.

Where were you yesterday evening!

I’ve posted my plans on my website. Here’s what you need:

Liking the desk. I’m going to have to build one this summer. Will probably be more of an angled drafting desk than a formal desk though.

Love the lines of this one though, and I like the exposed hardware too. I noticed you had a glass top surface in your plans. Any reason you didn’t go that route with this one?

My wife wasn’t sure if she liked the glass. I decided I’d build it without the hole and if we felt like we wanted to use the glass, we could add it later. The glass was coming from a cabinet door that I took down earlier this year. I was hoping to recycle it rather than toss it in the bin.

Have you seen the design for a drafting table in Nomadic Furniture? Maybe that should be my next project too.

YEAH! i just got Nomadic and nomadic 2… although i usually get a sour taste from reading papaneck’s rants, i love those books.

ever since i saw that book i wanted to build one of those cube, like the work cube, or the relaxation cube.

Great stuff! I’d never heard of the Nomadic Furniture books, but I’m definitely going to have to pick them both up! I like the idea of creating a separate modular work/play/relaxation space by simply framing it off with some 2x4’s.

Not too sure about their cardboard child’s car seat though! 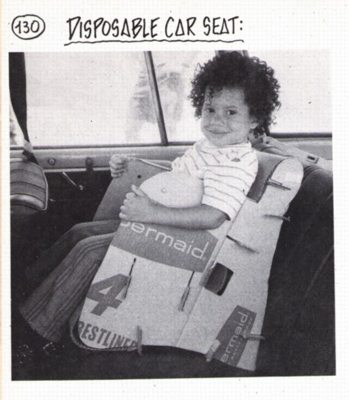 Gotta love those ideas from an age before fear of car accidents.

Great stuff! I’d never heard of the Nomadic Furniture books, but I’m definitely going to have to pick them both up! I like the idea of creating a separate modular work/play/relaxation space by simply framing it off with some 2x4’s.

I’ve always wanted to make something like this out of the alum. extrusion system stuff that locks together…

Overall the design is nice. Clean, simple and I can see how the angle of the top could be usefull. There are plenty of ways you could mount this to a wall without showing your hardware. The best bet is going to your local hardware store and browse, if that doesn’t do it, ask the people who work there… And I’m not talking about HOME Depot or Lowes, go local and ask around, you’ll get plenty of ideas. Also I would suggest using a walnut veneered plywood instead of stain, not that much more expensive and the results are SOO much better. Lastly a very basic butt joint for your joinery is not really a push for strength or craft. If you want to sharpen your “carpentry skills” go for a box joint or another rather simple but much more appealing joinery method than glue and nails. Shop time should be a joy of creating something in 3d, not a chore you complain to work on for 2 weeks. Get in there and be happy your actually Creating something.

Note: I don’t have a shop, I have a balcony! If next time occurs near a garage, I will definately do some better joinery. Thanks for the type on walnut though, I didn’t bother looking around.

Looks very nice! I have a soft spot for ‘floating’ furniture, but like others have said, try to hide the hardware!

Now you need to make a sweet plywood chair to go with it.

Saw this on Product Dose this week:

It’s $655, although made of walnut. Interestingly it says it has no visible hardware, but the photos show three screws in the back piece. If they can claim it, I will start to as well! AllModern | All of modern, made simple. | AllModern

Shop AllModern for the best of modern in every style, smartly priced and delivered fast + free.

It’s $655, although made of walnut. Interestingly it says it has no visible hardware, but the photos show three screws in the back piece. If they can claim it, I will start to as well!