So I was looking for a seat on the train, nobody likes sitting in their assigned seat next to strangers that keep needing to go to the toilets, and neither do I.

Found a seat, no strangers in sight, made my self-comfortable, and put on my headphones.

Five minutes later, down the aisle comes the man collecting trash. Ask’s me if I have trash, I say no. Then he points out the book, purposely placed on the aisle opposite in order to save the readers page. Ask if it belongs to anyone? I say, I donâ€™t know, I’ve only been sitting on the train for five minutes. ‘Trash-Man’ shrugs. Moves down the train, hunting for rubbish.

I pay more attention to the book, wondering if its just been discarded. Look at it more closely - ‘‘Designers are wankers’’.

Is this fate?! I’m on my way for an Industrial Design interview for a degree that’ll leave me in the career of design, hopefully a designer myself, who are apparently ‘wankers’ - I donâ€™t want to be a ‘wanker’ - Is this a sign?

I pick up the book, the thought that it may actually belong to somebody doesn’t enter my head. I start reading, and thankfully it isn’t a book explaining how designers are ‘wankers’, but on how to get a job in design after graduating! Now the thought that hopefully someone has really discarded this book enters my mind, and also the thought of causally placing the book in my bag and walking off, though I’m not a bad kid.

This looks like a great book, and a great read, though I’m soon lifting my head up from the book to some guy searching all over for something he looks like he’s lost…
"Er… This must be yours’’ To which he replied, ‘‘Yes, it is’’ with a ‘‘What the hell are you doing with my book’’ look on his face.

My smooth talking eventually managed to convince him that I was not in fact a thief, but a potential designer on my way to my first interview. He was convinced, and we had a great conversation on design, the industry and tips for me interview.

Whether this was a story of fate or just mere coincidence I thought it’d be a great story to break the ice at my interview. But I thought the use of the words ‘desingers’ and ‘wankers’ in the same sentence, at an interview, wouldn’t go down to well. So I left it.

Anyway, I hope you enjoyed this story of fate, coincidence, lies, murder (ok, no murder) and ‘wankers’ - Which I hope is a lot better to break the ice on a Design Forum, than an interview. 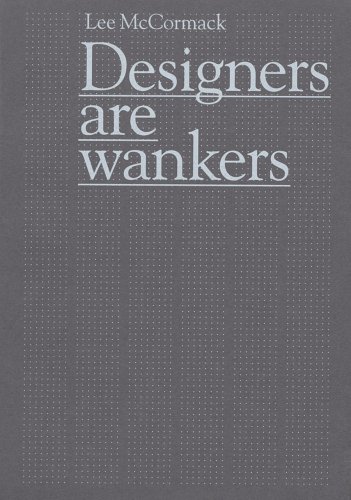 Shop for Designers are Wankers and other books in Ireland with Shop Ireland.

You mean this is not a joke and there is an actual book by this name?

Yeh, defiantly is real book. When I looked it up on amazon.com I now realise why he didn’t hand the book over to inspire a young desinger - it’s Â£20!!! lol.

What a pitty about the high prize. Imho the writer is unsucsesfull designer, but succsesfull writer.

So did you get the job??

I would’ve definitly mentioned the book in the interview - I can’t stop myself from blurting out crap like that all the time. no self control whatsoever