Wondering if anyone has samples or templates for a design matrix, looking to gather various ones to ref as i create a new one.

I might have a few to share, though none are spectacular by any means. For clarification – a decision matrix? a team role matrix? a matrix to sort initial concepts?

Here’s a concept decision matrix I found on Google.

You can even weight each category/trait and use the weight as a multiplier to bring out the more critical aspects of the designs.

a decision matrix and a matrix to sort initial concepts?

you can send to chevisw@hotmail.com 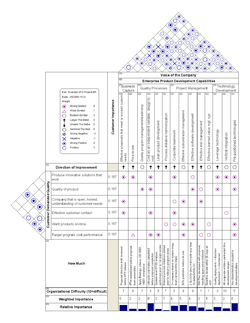 Quality function deployment (QFD) a method developed in Japan beginning in 1966 to help transform the voice of the customer into engineering characteristics for a product. Yoji Akao, the original developer, described QFD as a "method to transform qualitative user demands into quantitative parameters, to deploy the functions forming quality, and to deploy methods for achieving the design quality into subsystems and component parts, and ultimately to specific elements of the manufacturing pro The h...