I know these two fly way under the radar of hate. Unfortunately, they contain two of the worse design detail failures I’ve ever seen. So small, yet so frustrating! 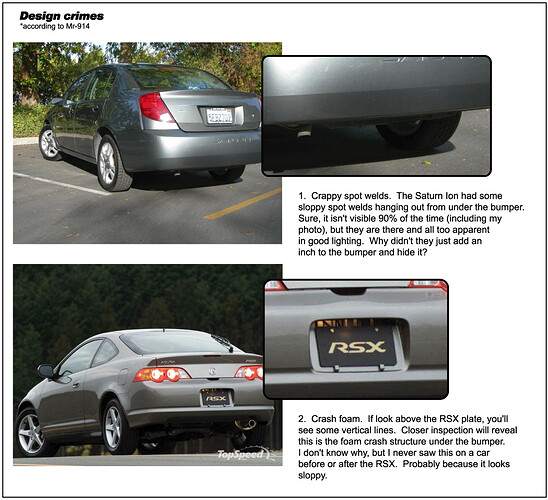 Honda was doing that back in 1991 too, my car has that “feature” although its much less pronounced, you have to go up to the bumper, get on the ground, and loop upwards to see it. Is it some sort of manufacturing necessity perhaps (or at least to cut costs)?

did they create an undercut in that place?. might be that the missing
surface wasn’t moldable or not moldable without warping?

come on, that is a “design detail” according to the engineers. It works, who cares? They sold a lot of those RSX’s, it must be good design, maybe we should put that detail on every car? (read with my sarcastic voice)

Yo: They sold so many, they decided not to make a new one hehe. Your sarcastic voice sounds like my serious voice though (Hey, it sold, it’s good design).

en tous cas. I know that it’s there because of the way the bumper is molded and the way they assemble the plate light kit. However, most cars manage to hide any openings like this, like kdb’s older Honda. If you have to crawl on the ground to see it, I think it’s OK. The reason this is a design crime for me, is that I see it every time I’m at a traffic light behind a RSX.

it’s just like: “more than meet the eyes”… maybe they sold a lot because their owners prefer function than form just few minutes before they paid for it…

Here is how to integrate a plate into the design: 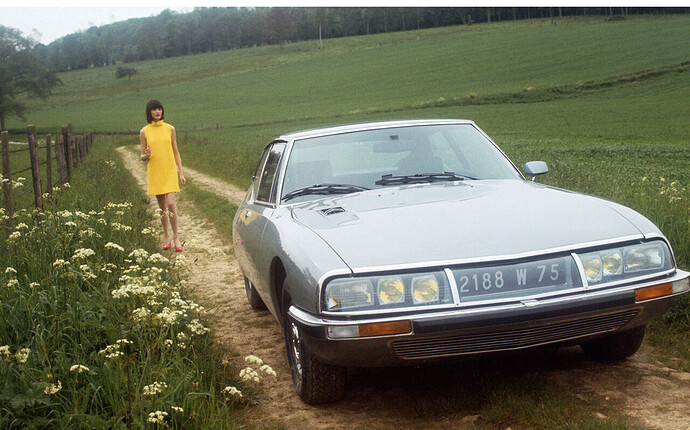 Here is how to integrate a plate into the design:

Here is how not to

Why don’t they contemplate that into the design? It’s a car. It’s gonna have license plates!

I quite like that scaled down plate off center on the alfa, feels sporty.

Gee, I don’t even know where to start; its like an encyclopedia of bad design choices. And I thought the Pontiac Aztec was bad!

i don’t want to diverge too much from the OT, but i would rather pay the $15 fix it ticket rather than put a front license plate on my car. i have rejected a new car at a dealer because they drilled the front bumper fo the plate mount.

on the RSX, i think the flaw is a result from design details (lift gate access and curves of the bumper) and mold design. looks to be warping from cooling/shrinking.

Here is how not to

I always liked the off centre plate on the alfa as it allows for a great front 3/4 view where the plate becomes virtually invisible! 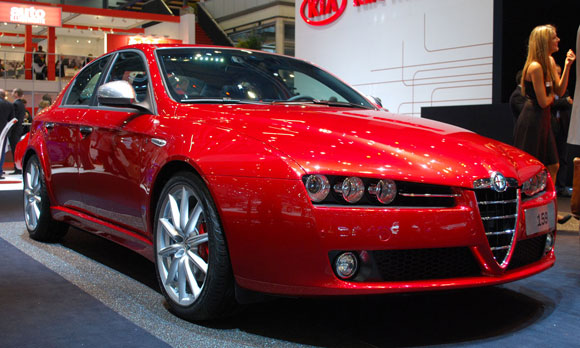 this topic has caught me and i find myself studying more vehicles during my commute to and from work.

so far, i am not fond of the the faux chrome fender vent on the 2010 caddy srx

reminds me of the same one placed on the previous focus sedan.

something else i’ve been studying are the OEM wheel designs. why are most OEM wheels ugly?

I’m just using this quote to bring up a question. Has anyone else noticed that BMW is using “European” proportioned license plates in their US television commercials?

… why are most OEM wheels ugly?

Because, somewhere backing the mid nineties, CAD/CAM made it so easy for anyone to manufacture a complex looking automobile wheel. And since wheels are the essence of the automobile, it stuck. Look at automotive concept renderings … low profile sidewall proportions have taken it to the point that many appear to be riding on the rims.

Two big (relatively) disks on the side of a vehicle shape dictate that our attention will be drawn to them.

another example of “protected” license plate
i understand there was an issue: the glass reflected RADAR flashes and the license number could not be read,
so this feature was removed from production, and only early cars have it.

No front plate required in Michigan, and other states. Saves the state money.

I quite like that scaled down plate off center on the alfa, feels sporty.

If cognitive dissonance had a physical form, it would be this car

Well I am not sure if you have this beauty over in North America, but from the same creators of the Stavic (the mothership van above) comes this timeless classic the " ACTYON" 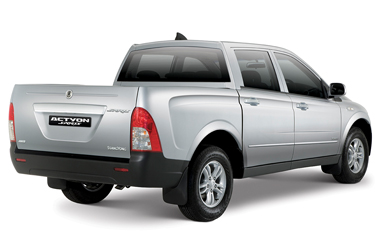 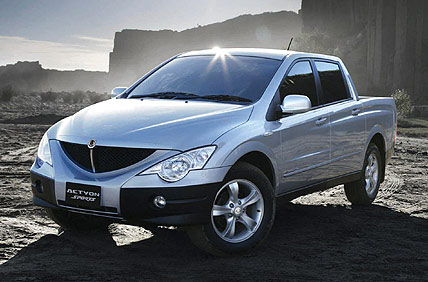