If 85 to 90 percent of the world’s population is right handed, why are the USP ports ONLY on the left side?

source of frustration for me as well. I like how all ports are on one side, but wonder why that side and not the other?

I keep wondering why they don’t just do away with the optical drive in their macbook pro’s all together. I rarely use it if at all, and I would much rather have that space occupied by a good 2 TB extra of storage. That said, if they were to do that, I think the ports could easily migrate to the right side - well maybe just a USB or two. I do like having the ports all on one side.

I keep wondering why they don’t just do away with the optical drive in their macbook pro’s all together. I rarely use it if at all, and I would much rather have that space occupied by a good 2 TB extra of storage. That said, if they were to do that, I think the ports could easily migrate to the right side - well maybe just a USB or two. I do like having the ports all on one side.

Its pretty much essential for me, especially when have to set up bootcamp. Id happily lose some of the other ports though, in favor of more than two usb ones.

How many in here use the mighty/magic mouse? Only reason i have one is bceause haven’t found a wireless that doesnt allocate a usbport with its dongle.

I actually like Apple mice. Like you said (bngi) I hold it in a claw like fashion (between thumb and pinky/ring finger) and rest the right side of the hand on the table (the “pinky side”). This way I can keep my wrist straight (no nasty bend). I also have the Logitech G5 and G9 with all their “ergonomic” gimmickry but I prefer both the mighty mouse and magic mouse over these (I even have an Apple Pro mouse that I still use at home, no scrollwheel and only one button

How many in here use the mighty/magic mouse? Only reason i have one is bceause haven’t found a wireless that doesnt allocate a usbport with its dongle.

checkout my post about the razer orochi on this thread

L-o-v-e it, bluetooth and it’s great for cad stuff

Something else i noted is related to the keyboard for desktop Apple computers. It;s all about the “CapsLock”…

The tiny little light0indicator is positioned in the left side of the key which means that when i type, if i want to make sure that it is activated i have to pull my hand off the keyboard to check… NOT NICE!
Many other things have been noted by others before. I was really surprised to find so many faults on apple products as before i have to use them (work mainly… hehhe) i though they were super thoroughly designed but i was wrong. Maybe they invest more into digital UI and they leave simple hardware interactions neglected…

360 scroll on the mighty mouse… makes my life so much better. Maybe not the most ergonomically friendly, and I’ve have to open it up a few times to remove the gunk from the pins on the scroll ball, but I have to say I will probably replace it with another of the same when it finally gives up.

MacBooks only have USB on one side? Glad I bought an $400 Acer at Costco. Looks good, 3 USB, one on the left, two on the right.

Also, the last few keyboards I’ve had come with software to put the caps lock light on screen. When I hit caps lock, an icon pops on screen for just a couple seconds to let me know that I’ve changed something. Mac does this?

I’ve never had any problem with knowing whether caps lock is on or off, and if in doubt I have no problem seeing the light on the caps lock (without moving my hands). It’s on the left side of the caps lock so that your left hand will not cover it. If you will you can install 3. party software that will indicate on-screen when you turn on/off caps lock.

A nice thing about mac-keyboards (might be other manufacturers do this as well, haven’t tried non-mac keyboards in a while) is that the caps lock is made so that it just a bit less responsive than the other keys to avoid accidentally activating it.

My main gripe with the caps lock key is the fact that it is there, or to be more specific the fact that a key I rarely use occupies such a central position on the keyboard. It made sense on old typewriters when holding down shift over time required more effort, but it is about time the caps lock was, if not dropped, moved elsewhere on the keyboard.

I’ve personally never seen the problem with having both USB ports on the same side, and that a laptop “only” has two ports. I gladly drop one USB for firewire 800.

No, it really doesn’t

The good: The keyboard (stolen from Apple). The cover is a textured matte black that takes the bumps and scratches better than a high gloss surface. It’s thin and the design emphasizes this. There is a nice texture surface that integrates the touchpad flush with the enclosure.

The bad: For some reason it will turn off when I hit the on/off button too easily. I should only be able to reboot using this button and it should be more difficult to do. The touch pad is too small. The power cord attaches in an uncomfortable place. It ends up blocking a USB port or just being in the way (it’s half way down the left side, rather than in the rear). Lastly, the hot air from the processor fan blows out the left side onto my hand all the time making it uncomfortable.

The ugly: There is too much going on. 5-6 textured plastics that are mostly different for styling rather than function. The sides of the main enclosure are too faceted to keep the enclosure as tight on the components as possible rather than working with the overall design of the device. There are too many break lines. I’m actually fairly confident this could be produced at a lower cost and look better. Unfortunate.

MacBooks only have USB on one side? Glad I bought an $400 Acer at Costco. Looks good, 3 USB, one on the left, two on the right.

Also, the last few keyboards I’ve had come with software to put the caps lock light on screen. When I hit caps lock, an icon pops on screen for just a couple seconds to let me know that I’ve changed something. Mac does this?

You’re a designer and you bought a $400 laptop at Costco? You’re only excused because the economy sucks. =)

The thing that is frustrating for me is that I want just a basic Windows laptop but with a really well finished design that costs no more than an extra 20% premium. Doesn’t exist yet.

Actually, the most frustrating thing is that there is no Windows computer as nice as a Mac from an ID perspective. I’ll admit it. The price premium is much more than 20%. Sure, the Mac has a 2.6 ghz dual core v. my 1.7 ghz single core, but not that much else (nothing I need anyways). That’s 60% more for a box that I actually like less because those damn white Mac Books always look dirty.

Why should a designer fall for his own “tricks”. Apple play their cards well.
I appreciate that. But I can’t run all the stuff I use on a Mac. And I hate
cyclopic mouses with one button…

So when I looked for a capable windows laptop with Nvidia grafix last year
I opted for the third cheapest in the market. Originaly I wanted to replace
a Toshiba with Toshiba (as IBM is no more). But they cheapened everything
down a lot ( everything but price). The only one who did a fine Windows
laptop with metal chassis last year was SONY and a small vendor, who mills
his own cases. I didn’t buy either. I took this one:

I admit though, that the Sony would have been nicer. But it felt like a ripoff.

Well, if quality manufacturing, refined aesthetics and a friendly UI are design ‘tricks’ then I guess then yeah, I do think designers should fall for them. 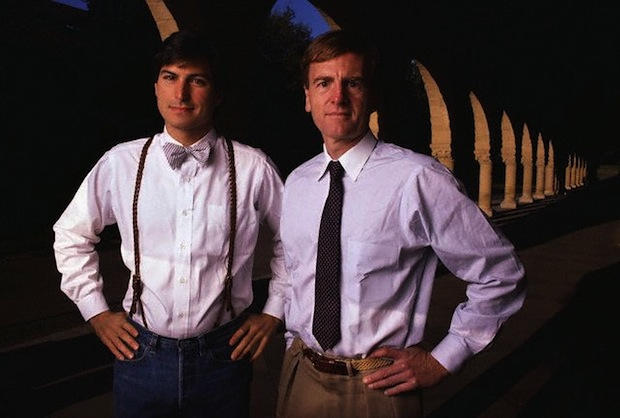 Here's a full transcript of my interview with John Sculley on the subject of Steve Jobs. It's long but worth reading because there are some awesome

Great discussion of Steve Job’s management. He describes his goal as making consumer products that are as well crafted as jewelry. I think there is a place for $20k Rolex and $120 Swatches in any market. In fact, in that comparison, I’ve always thought Swatch does better design.

The thing is that the price ratio is much more even with Apple and the CE sector, and in some cases their price even beats the competition (a la their tablet competitor predictions). Also, a $120 watch is still relatively premium. An Asus or Acer is more like a $30-50 watch IMO.

Whoa, now I get up after a night of 5 hours sleep and in the meantime Mr-914 brought up
my comparison.

I do think, that indeed both are more about perceived quality than anything
else.

Why does a watch have to be crafted “by hand” and be plated with gold?
Why does a Laptop need an aluminium chassis and a glass display?

The high class watch is said to be made that way to last for generations.
Well. . .

But the laptop lasts me 2 to 3 years and is to be passed down then. Or
re goes to recycling. So I wouldn’t judge it against the same set of objectives
as a car, a house, or a kitchen sink. It’s more like a consumable to me.

There are some low cost computers that are utterly repulsive. Acer improved
a little within the last 12 months. But most of the thingies below 800 Euros are
flimsy but covered with garish decor. I couldn’t stand what price seems to dictate.

So I was happy to find one that combined solid engineering with toned down
traditional industrial design at an excellent price point and am up to defend
that decision.

I for one think that the average apple buyer buys into a Brand, that is as
supercharged with myth as Rolex once was (before the flood of China Rolexae).

I guess I just don’t see where Apple is being dishonest when people throw terms like ‘myth’ and ‘tricks’ out there. And buying into a brand? Brands are vehicles for communicating a company’s values. I thought us product designers were supposed to understand that. You can’t really say that Apples brand disconnects with their core values. As long as a brand strives for excellence, sticks to their values, and makes useful products, I see no harm in brands.