Design bug of the day: Mercedes

$61,000 base price and they do this!!! I understand the technical reason for it (they need to make the window shorter to have it roll all the way down). C’mon Mercedes…you could do this better! 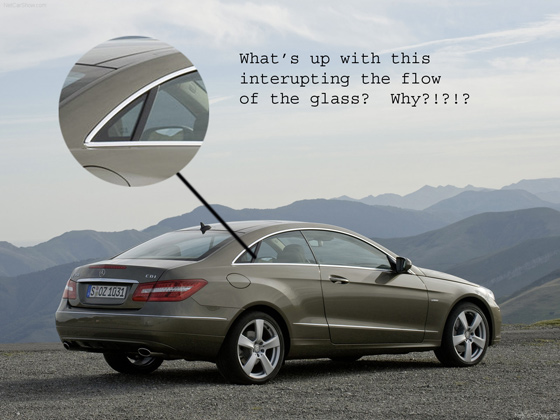 Its an awkward car. The DLO is so long that it looks like it should be a sedan… which is was, before they took two doors off. The stance is very sedan as well. The car just doesn’t make sense. It is the German version of an Accord coupe. Compared with the A5 or the forth coming 4 series, not sure why this sells.

yo: I think it doesn’t sell that well. I saw my first one yesterday and I think it’s been out for a year or two now.

I love the modern take on the pillarless hardtop concept though. Yeah the DLO is long, but it’s different. Kinda neat that Mercedes has a history of this too.

How come they didn’t need to have that oddball piece of glass in 1976?

Stuffed Vulture: The humanitarian in me agrees with you.

Perhaps it’s employed to do something with that rythmic wind buffeting noise you get when travelling at speed with the windows down?

It’s a very visible piece of cost cutting and thus loathed by the german car enthusiast.
The W-126 coupes of old had equally big windows back there, that were not interrupted
and had a clever rotating/angling mechanism to slide behind the back wheel well.

This was the way our fathers and grandfathers got their Benz. Above is what we get now.
(But the car is much better equipped on base spec.)

Also with the new Merc E class, every time you switch it to sports mode, the button is on centre mount but on the passenger side. If you want the full sports mode you have to switch of the eco button off too. 2 buttons placed in stupid positions.

It should be on the steering wheel.

Mmmm - ‘Best or nothing’