Is that top shot of it open?

If so, looks way to Apple esque. That design language system is fantastic, but in the gestalt of the marketplace, it is theirs. There are 1,000,000 ways to solve that set of problems. Find another one that is equally as compelling and represents the brand you are developing this for as a leader, not a follower.

Thanks for the feedback Eman! I’m curious what you mean by split line? where on the device are you referring to?

Im referring to where the colored rubber part meets the black plastic.

the reason that was so large is that the top surface of the base was actually a chamfer. I’ve gotten rid of the chamfer since then, so they fit together flush now. 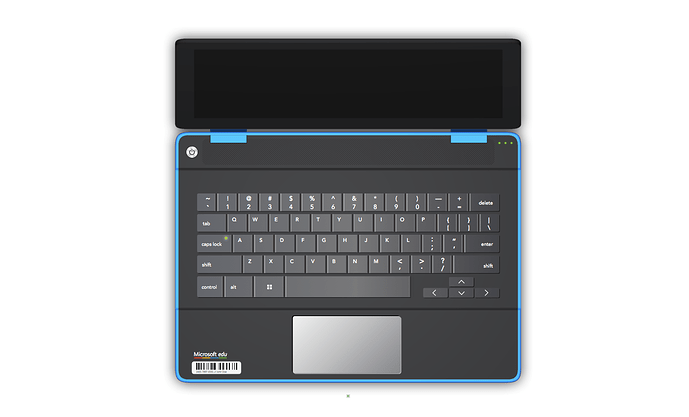 Hey hey, there you go. It feels like your now.

Any way to integrate the upc in a more elegant way?
What about the touch pad?
The power button seems out of place now.
can you make the speaker perf go all the way to the edges and put the LEDs underneath and float the power key within it?

The UPC is a cataloguing tool for the school to use. They put the stickers on anyways, so why not designate a place for them. That being said, I realized inside of the computer wasn’t the best place for it. (imagine scanning 200 codes. Open>scan>close…) So I’m gunna move that to the bottom by the regulatory stuff.

Some revisions… I’m still not totally happy with the power button. And the LEDs stil feel a bit cramped. So I’ll see if I can’t figure that out… 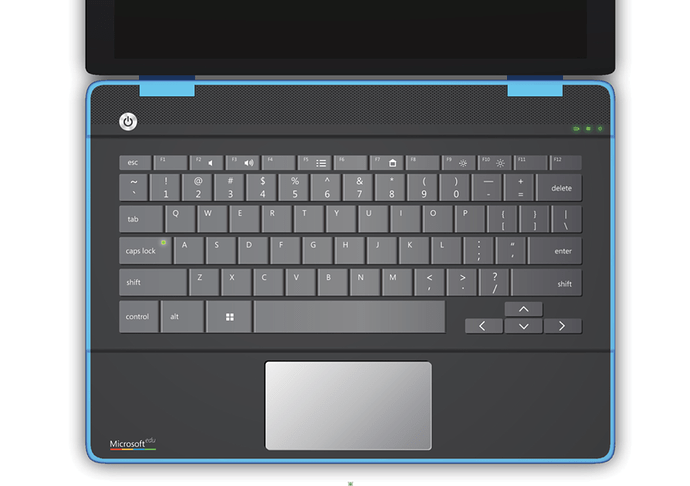 It is definitely getting there Dan. The power button stands out as not only round but also metal. What is the thought behiong making it metal?

I think you could consider something like that on the touch pad since the top line of it is next to what looks like a small step, and the bottom could relate to the radii on the bottom corners of the outer form. Why not go a step further and make the top line completely abut with the step above it?

You might consider a similar detail on the outer keys of your keypad to unify the design. 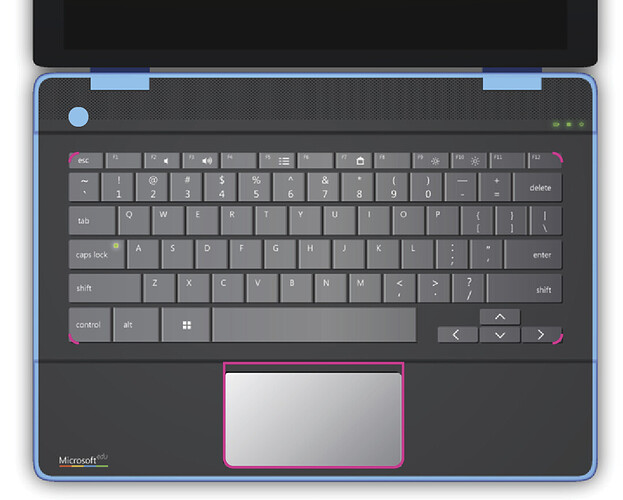 Refreshing to see UC update its curriculum and put the chair project where is belongs…in the past.

The chair project isn’t in the past yet! I’m just one of about 5 students not taking that studio. The vast majority of product kids are still chair-ing it up.

Thanks for the questions!

The chair project is still a good learning exercise I think.

I think this is a good spot for the keyboard layout. The only thing still bugging me is the power button… 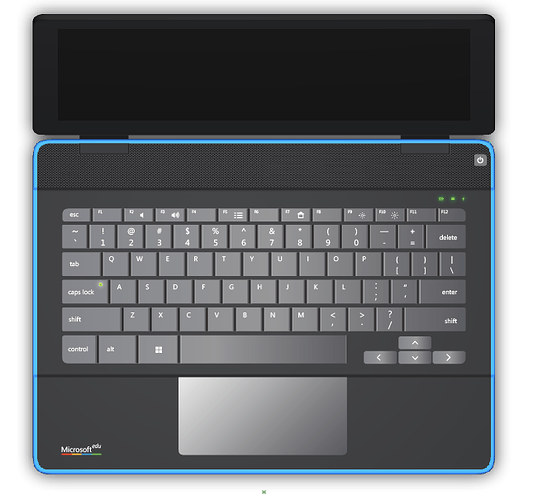 much cleaner. Good work. What about something that plays off the hinge for the power button? 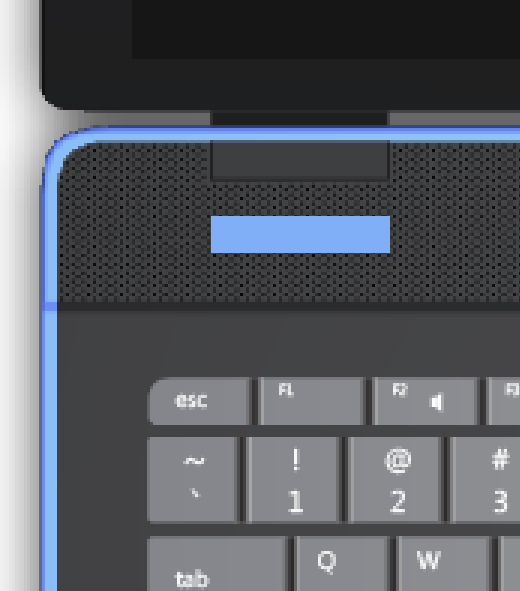 that just might work! I think i’ll do something similar when I cad this all up, though maybe on the right side, by the power indicator icons. Placing the button by the lights it might affect seems to make sense to me.

After some time in CAD I finished up the main build 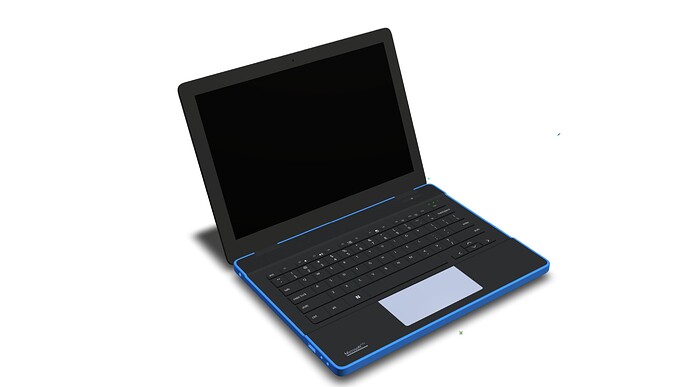 finished.jpg2750×1543 132 KB
Next up in CAD is designing the power brick. I was thinking of ways to make it more useful, more than just a brick. I have 2 ideas right now: Add an outlet to it, so it functions as a splitter (there never seem to be as many outlets as laptops. What if you could just plug into someone else’s brick if you were low on power?) or have an auxiliary battery in the brick so you can plug it in even when there isn’t an outlet around and still get another 20 minutes of charge. Thoughts?

The idea is bring the metro-y feel to a laptop OS scale. Bring it beyond just the start up screen in windows 8. I’d say the aesthetics are still pretty malleable here. Not so sure how to present the functionality of the OS yet, so here’s a screen of some of what I have now: 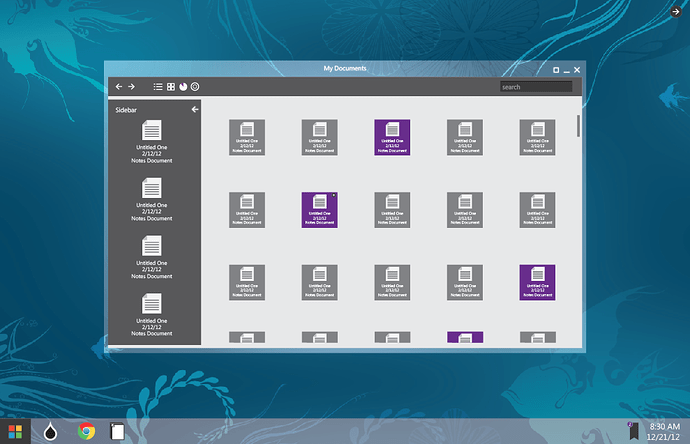 Couple more detail shots of the jump drive and bottom 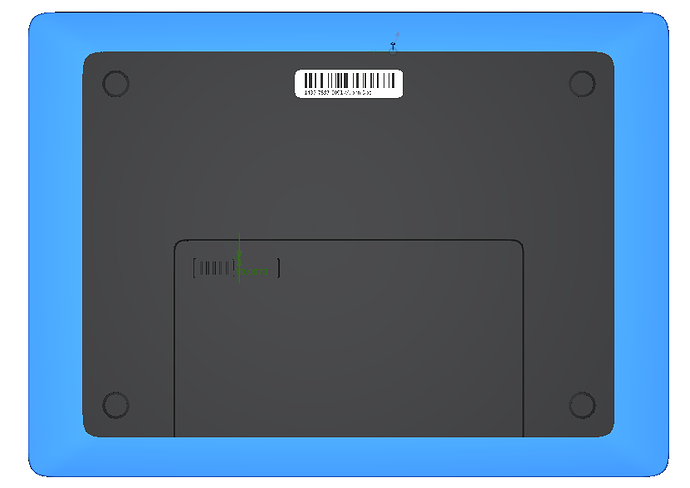 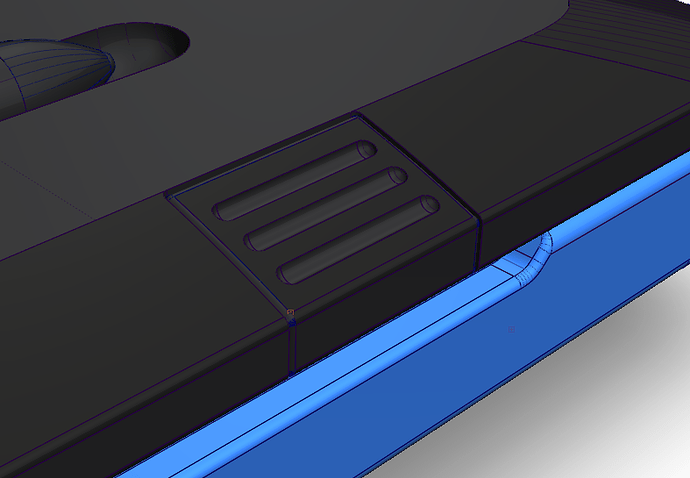 What’s the idea behind a custom os, aside from fun to design? Wouldn’t running windows or other existing is be the most productive to allow apps that people normally use and the widest compatibility? Would a schools IT department want to support a different os? Would there be enough apps to use? Or is this just a fantasy world where practicality and scale aren’t that important?

Realize you want to have a fleshed out project but just asking the questions someone might ask if reviewing the project in your portfolio.

Hardware I can somewhat see a case for unique design for a singular application but software I’m not so sure unless it was just for little kids or developing nations like the olpc.

good question Richard. The way I would explain it is this: Microsoft EDU (our tentative brand name) is a flavor of windows 8 (or whatever version exists in 5 years from now) much how there are customized flavors of android. It’s a lighter weight operating system designed for minimal power consumption and includes a variety of features specifically centered around education such as: context aware scheduling (it knows what class you’re in during the day and schedules homework and assignments based around this), bookmarking, e-ink to lcd transitions, and a note taking application.

Pragmatically, this OS design is a requirement for the studio, so instead of just making it a throwaway whatever thing, we’re trying to make it as real and integrated as possible.

Ok. If a proposed windows thing, I could see that. I didn’t think of that direction (or missed it in the earlier posts) and it makes sense.

Certainly in theory it would make sense for a custom build by ms to hit a huge market if there was a saleable benefit. Have you considered other angles for the hardware/software to address some of the economics and scale of the educational market? For example upgrade ability, subsidization by ads or other ways , security both physical and virtual, durability, etc.

It’s those real world things and business case thinking I think would take the project from just another laptop project to an applied, strategic thinking type of exploration.

to be honest no, not really. I hadn’t really thought of the “business” side of things that much in depth. I think ad support for an operating system is a very interesting angle to take. Especially to combat the cost issues schools face so often. Online data security is another interesting thing to think about. Especially with grades/files. I’m not too entirely sure I understand the Upgrade-ability though. wouldn’t it just be digital like windows updates are now?

I appreciate the insight. Definitely want to make this more than just another laptop. A strategy piece would be valuable to develop and think about.

Upgrade wise was thinking more hardware. To sell this to school boards lifetime costs would be a big thing I would think. What is your plan for the purchase/use? Schools but it and provide to kids free? At some cost? Take back after each year to refurbish? How are broken or out if date hardware problems solved? How future proof is it?