Cutting path at an angle + twist in CAD?

I didn’t think this was difficult, so I hope I’m missing something simple:

I’m imagining a cutting tool moving across an object along a 2D path (X, Y) and twisting (Z) according to an ever increasing angle… something like the following image… 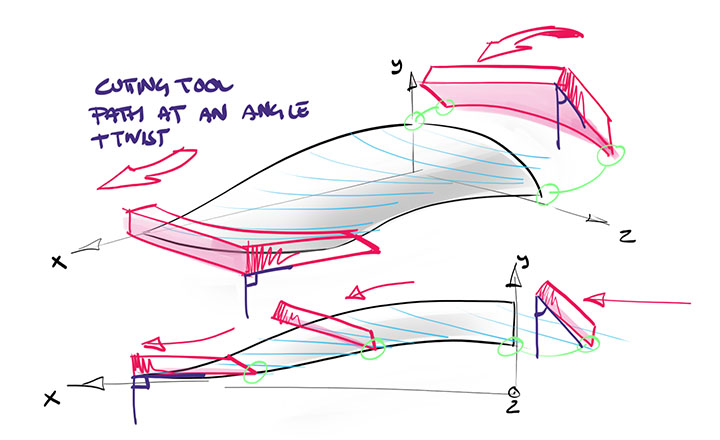 Now, in Solidworks I thought that all I had to do was use the “twist along path” feature in Sweep, but I can’t set the axis for the twist and it chooses the wrong one.

In Alias I thought I could use the “Rotate Xform” feature in Rail, but that actually does the exact same thing as in Solidworks!

Is there a solution to what I’m trying to describe… and am I making any sense at all?

This is for a possible machining project, by the way. It’s for a CNC mill that doesn’t take surface input, only path data.

Can you construct a swept surface that does what you want and use it to cut? CNC’s only use tool paths to cut, never surfaces. The tool paths are generated from surfaces in a CAM program – Mastercam, Surfcam, Powermill, etc.

Well, the question really was if I can add a twist to the sweep… I guess my scribbles weren’t clear enough, but I don’t have time to redraw it tonight.

seems the resulting surface is just a 4 sided boundary, pretty straightfoward, no? 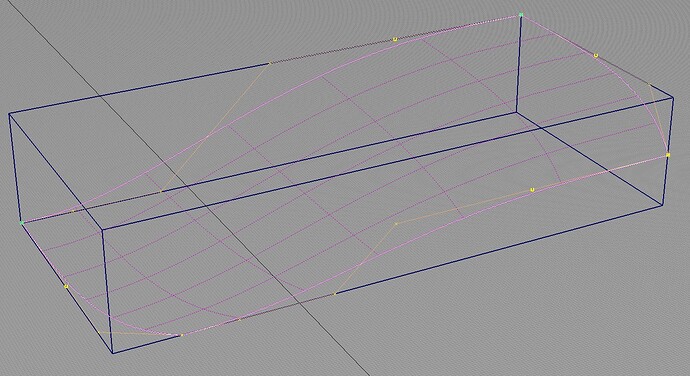 Now, your image (and I’ve constructed one myself) is defined in the CAD software by the surface or surface boundaries, if I’m not mistaken.

What I need, is the same result defined by the path of the far surface boundary in your image, plus the twist the profile of the right boundary experiences while traversing that path.

…again, perhaps that explanation only makes sense in my head.

Parametrically (or using “history” in Alias), I need to accomplish my goal with a sweep or rail, and not a boundary surface of any kind.

I’m pretty certain that a sweep will not give you an accurate machinable result. Someone can correct me, but I believe that lofts, rotating sweeps, etc. are all interpreted mathematically, and therefore not accurate. That may make it quite difficult to machine.

Still trying to figure out exactly what you want here…so you’re trying to create the surface that you would get if you slid and rotated the “cutting tool” as illustrated through a block? Which does’t really have anything to do with machining since CAM programs just mesh your surface and throw cross-sections through it to make cutting paths. Why doesn’t simply making a rotated copy end section for the sweep work? (Other than I don’t recommend trying to make NURBS surfaces with adjacent edges tangent to each other as you seem to wind up with at the end?) Or making a few rotated copies to guide it?

I just found out that I have been going about this the wrong way.

The way you work the machine in question (still don’t know exactly what it is) is that the cutting tool is fixed in place, and the work piece is the one moving… and he made it sound like its moved manually, as in by hand, along the path of a jig.

It’s very difficult because I’m freelance, talking to someone in one country, who hires a spot in a factory in China…

Again, I’m trying to avoid a surfacing solution, because while it works, that is a different machine which costs triple the price.

It’s really not an ideal situation. Wish I had a ticket to China.

So, time to revisit this… 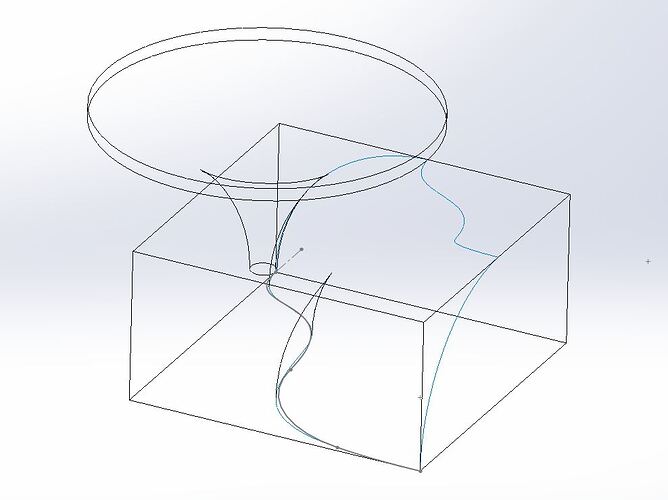 I’ve moved on from Alias to Solidworks this time.

Now, how do I NOT fake that result? SolidWorks won’t let me use a solid sweep because apparently the body of the mushroom is not “convex” according to it.

CNC cutters that look like that are used for corner rounding, not for machining complex surfaces. Ball mills are used for cutting anything curved.

CNC cutters that look like that are used for corner rounding, not for machining complex surfaces. Ball mills are used for cutting anything curved.

Yeah we’re still not sure exactly why you’re trying to do this. And looking at the help for “solid sweep” that the cutter is not convex is probably not the only problem, it’s for very specific cases. CAM software that simulates the result of machining operations is “faking it,” working on a mesh version of the objects. If this is for some sort of strange specialized machine that’s maybe not even CNC, they’re not going to give a hoot about the surface data you’re trying to “not fake,” they’ll just want a drawing of basically what you want, and/or the CURVES used to define the path of the cutter.

If you are using a corner rounding endmill, you would essentially be creating a fillet the size of the cutter radius. Complex curves need to be generated by CAM software using a ball end mill, as previously stated. It’s been two months, I would suggest you seek face to face help.

It’s been two months, I would suggest you seek face to face help.

Oh, god if only. I’m not even getting paid for this, let alone a ticket to the factory they are subcontracting in China…

CNC mill is probably the wrong word for the machine/process. The translation has gone through Mandarin - English - Swedish - Me - English again… I mean, I think it’s literally some poor Chinese worker with a wooden jig that puts every piece through the machine by hand.