these are some concept sketches of contemporary cutlery that i developed on a tablet pc. i’m trying to transition into digital sketching from traditional pen and paper (it’s hard to ‘let loose’ on a tablet pc compared to prismacolor on a big newsprint pad …). any constructive comments are kindly appreciated ! 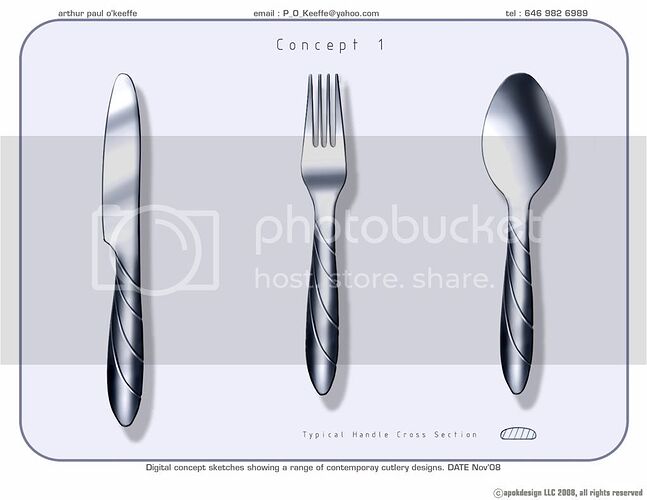 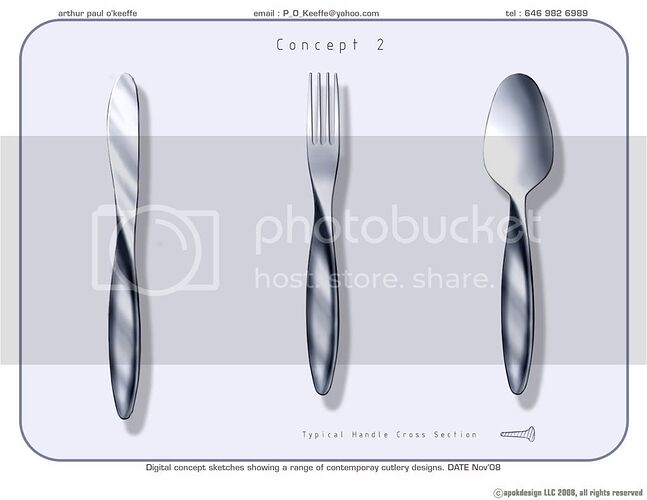 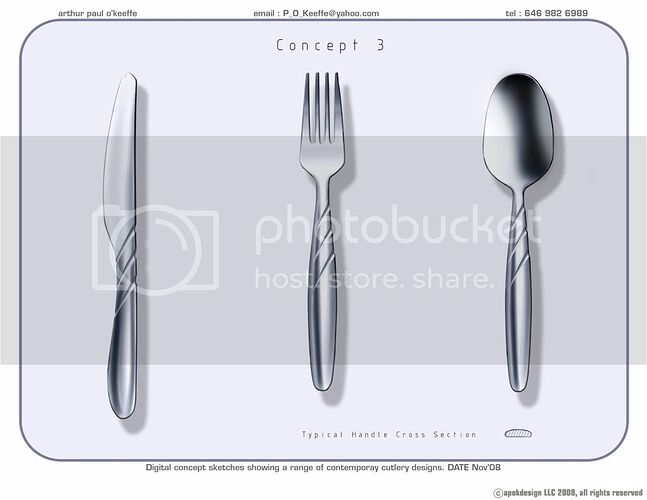 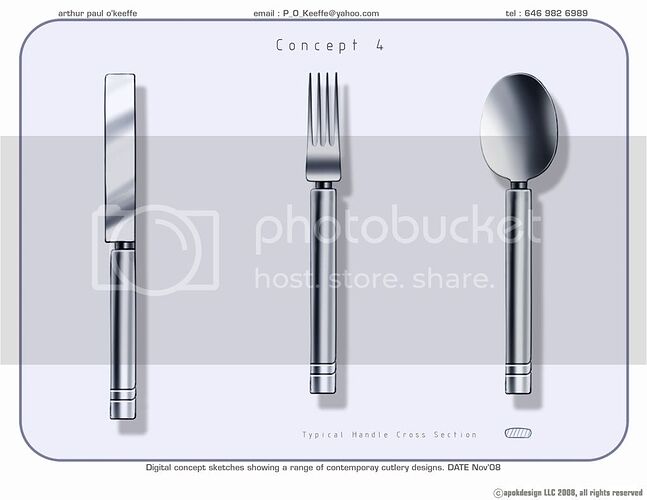 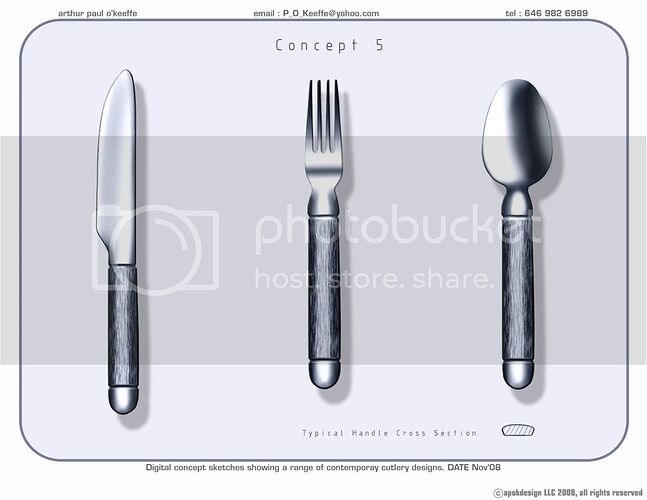 good stuff, pojo! i bet if you got rid of the outlines and emphasized the shadows, contrast and highlights it would pop even more.

Pojo: Funny, i have been working on the same thing for a while now - I was using a tablet for the first time to do sketches though. tell you what - I’ll tell crit you you crit me…

heres what i see:

I think if you want to be a little more loose in style start sketching 3\4 views of one item - try a spoon maybe - then you can let the arcs fly out of your arm. Also - use big brushes at first -

Concept 3 reads the best as metal - i think it’s that nice reflected light on the left side of the handles.

how far are you going to take this project?

I think concepts 1,2, and 3 are reading a little more deep/thick and/or round in the handles than I think you are intending. Just “turn down” the shading a bit, maybe just thin up the core shadows/reflections a bit and keep them closer to the edges.

pojo, some nice exploration and sketching. Overall I’m liking concept 4 over the others. This direction seems to be less-traditional yet functional which I believe is a good thing for a project like this. The knife in concept 2 has a good vibe - what if you took the same top down blade shape and twisted that into the same handle profile so it were symetrical top and bottom?

I thought I saw a design competition posted for cutlery but couldn’t find it when digging through these posts. Do you guys have any leads here?

thanks for all of the comments here.

stylerizal/idiot : i do agree that i need more subtle control over the shadows to give a better look and feel to some of the implements. it’s interesting how images vary in depth and contrast on different monitors, it’s hard to control this with the only consistent output being how it comes out on my printer (i guess if there was some way of presenting raster images online as vector images using specific web pallettes…).

c-limb : that’s an interesting idea with flipping the blade to have it symmetrical as you mentioned, my concern about this is the user might be initially confused which is the handle and which is the knife part ! it could be interesting… in concept 2, i made the typical handle cross section shape so it would have a soft rounded profile that would fit into the hand.

jgray : i did these sketches entirely on tablet pc. i do think some more loose explorations help prove the forms and probably some 3d sketches too. these were just some sketches i did for someone with whom i had a job interview with
(see my recent post in ‘design employment’

) i don’t think i’m going to take them any further, although i’d be interested in developing concept 2 into 3D and
maybe print it out in 3D to see how it works/feels…

Great job!!! I have to say that my favorite design is concept 4. My reasoning for picking this is that it is very simple and clean. When I first saw these designs it reminded me of a faucet fixture that my wife and I bought this weekend, It was just a simple sleek design of a simple tube that when you turned the handles it d3elivered water. Nothing more nothing less. Also this look comfortable. That is very important in culinary.

The only critique that I have is that I feel that it has been do before. Don’t get me wrong I love it but you really need to get that simplicity wit something else. I donâ€™t know if you and jGray are in competition built good luck,