The new release of Pro/ENGINEER called Creo 2.0 utilize higher order curves. ie. y=x^7 like Alias Studio has for years. We now have even more control over the curves when surfacing at the light reflection level.

I will be putting our some new videos shortly illustrating the new functions. I for one am excited since I have been asking for this for over 10 years.

by the way we have GE in for Alias Studio training all week. Converting them from Rhino.

I’m not a native english speaker, but this post sounds like an advert. Are you selling something? Or what is it, exactly, you want to discuss?

Well… I guess the post is an advert of sorts. Just stating whats new in the latest Pro/ENGINEER. I think people on this forum like to remain on top of whats new and to boot I’m most excited to have higher order curves using any software. To obtain more control over curves is something I have strived for using any software.

Do you know what higher order curves are? In Alias Auto Studio you can convert from a 3 degree curve down to a 2 degree curve i.e. in a one span curve you only have one CV in the curve. And in the same respect you can convert to a higher order curve like a five degree curve or y=x^5 (or higher) in order to obtain more shape from a single span curve without adding an extra knot to the curve geometry. This allows the resultant surfaces to not have extra isoparms (alias speak) or extra knot in the polynomial like you get with 3 degree curves in Solidworks or in the Alias Studio.

This type of curve generation is exciting only for those trying to obtain specific light reflections in an A class surface such as the back of the iphone 1.0 or ipad or auto interiors / exteriors.

Plus there doesnt seam to be a great deal of traffic on this part of the forum so i started a thread.

No need to apologize, I for one am glad I heard this news! I too like the thought of having more control over curves, but I guess for most people it’s not that big of a deal so the developers of mid range CAD don’t bother putting it in.

Either that or allowing the use of higher orders can be difficult for the b-rep algorithms. Alias Studio doesn’t have this issue as it’s a purely surface modeler.

To discuss the order of curves, discuss it in this forum without channeling us elsewhere. Or embed a commercial free video in the post.

Here are two examples from Rhino3D, the ChangeDegree command. Rhino3D allows degrees on curves and surfaces up to 11, it always has. 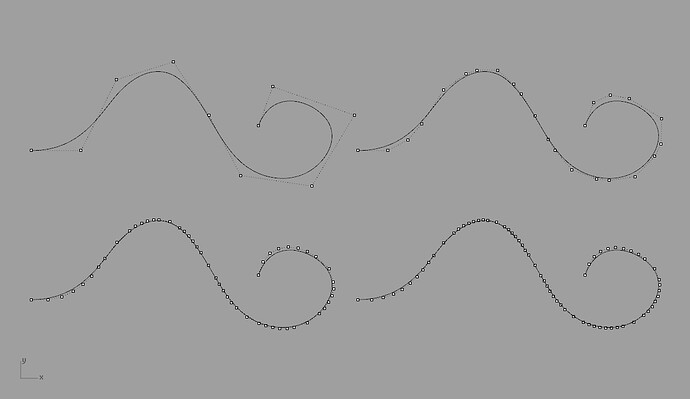 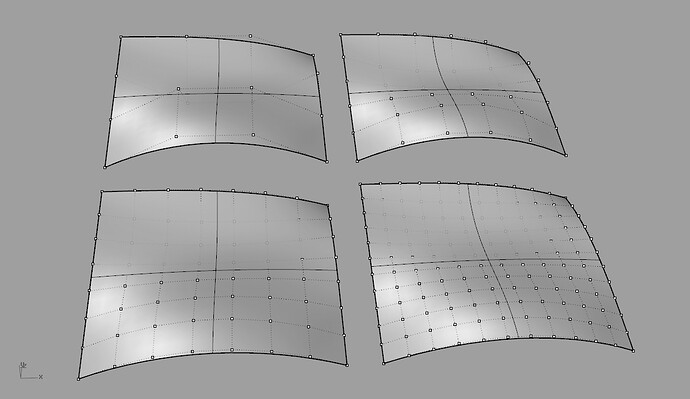 I’m pretty new to the subject, but I was under the impression that the degree of the curve didn’t necessarily relate to the number of control points. I thought higher degree meant more of the curve is affected by manipulating a single point, making it look less granular/less likely to ogee when pushing points. So d3 means pulling a point will affect the curve 3 ponts to either side of the affected point. Is this right?

On the practical level, do people here typically use >3 degree curves in rhino? I guess I assumed >3 was for car guys and rhino just threw it in because they could. But if I’m missing out on something I’d be pumped to know about it.

Damien - you are correct.

A 3 degree curve with multiple spans can have the same amount of CV’s as a X degree curve, but the way the CV’s control the curve is different.

The reason this is so important (and the reason why Alias is still the tool to use for car design) is more easily illustrated. Below you have a 3 deg, 3 span curve (top) and a 5 degree 1 span curve. Both have their CV’s in the exact location, but you can see the harsh inflection point where the 2 equations “meet” at the isoparm. Because surface reflections are so tightly controlled by this, this is why all “Class A” auto modelling is done as single span surfaces, to avoid any harsh transition between surfaces, while allowing G2/G3 continuity across the surface boundaries.

curves.jpg1486×509 56.7 KB
In normal modelling this is typically much less important, you can get away with multi-span surfaces without any issues. Especially if the surface is not highly reflective or without compound curvature.
Brett_nyc April 12, 2012, 6:01pm #8

worth noting that the resulting reflection continuity where 2 surfaces meet will always be 1 degree less than the surface geometry continuity.

Whoa. The nerd brigade jumped in on this thread… I love it.

Whoa. The nerd brigade jumped in on this thread… I love it.

Now I have my glasses on, and it is going to get a whole lot nerdier.

Okay, I thought I might have gotten that wrong, thanks for the correction Cyberdemon. Here is my favorite mid-range modeller, Rhino3D again. Curves with degrees of 3, 5, 7, 9, and 11. Lots of control points are needed to show 11 degrees. 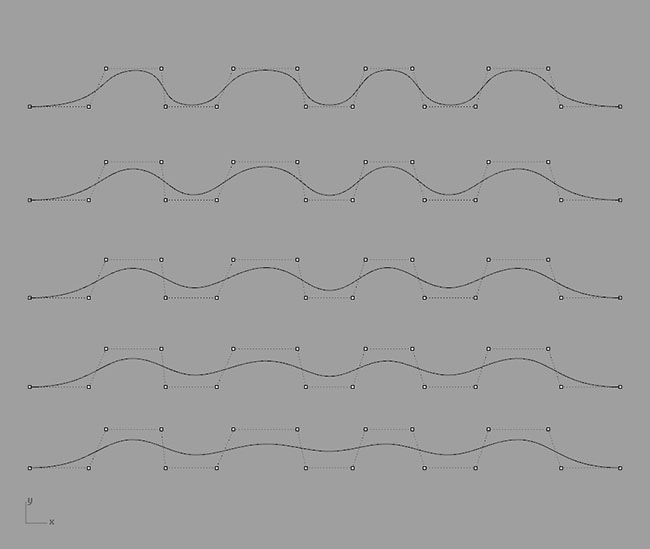 On the practical level, do people here typically use >3 degree curves in rhino? I guess I assumed >3 was for car guys and rhino just threw it in because they could. But if I’m missing out on something I’d be pumped to know about it.

I have always built with 3 degree curves. Is it not possible to build the same curve as illustrated in cyberdemon’s post with a 3 degree curve?

I have always built with 3 degree curves. Is it not possible to build the same curve as illustrated in cyberdemon’s post with a 3 degree curve?

Yes, it’s possible to build the “same” curve but that depends on a few nerd semantics:

-What’s your tolerance on “sameness?” For example, that simple Parabolic Curve I showed earlier would require a 3 degree 5 span surface to represent it to what I would consider accurate. A 3/3 is close, but not exact, and even a 3/5 has some slight deviation, so it’s not truly “the same” but it’s very very close. In fact, Pro E currently works just like this, where for the most part if you import a high degree surface and then perform any kind of modifications to it in the tool, it will recalculate your surface as a 3 degree/whole lot of span surface to get it to rebuild within tolerance.

-The 3 degree therefore will in turn require more geometry (CV’s) to dictate the same form. This is important to consider when you think of how Class A surfacing works. We want our geometry to be as accurate, and as light weight as possible, so higher degree curves make more sense.

-The curvature comb of that new curve will have spikes in it like I’ve shown. In some cases these are insignificant, but when the surfaces start to become very heavy, you can start to see issues in your surface quality like bone/tangency lines, and some other things that you may be able to live with, but on a reflective surface would be killer.

While I haven’t spent much time in an actual car studio, the geometry I have seen typically will use only the degree absolutely necessary for a patch and nothing else. Car designers also always work on a “theory” model which is proving out form, and the Class A surface model is generated after to smooth out all the topology and patch layout. In the product world, none of that typically matters - we build something that looks and feels good enough in 3D then ship it.

So to answer the question - always building with 3 degree curves isn’t necessarily bad. In fact if you are dealing with Pro E, keeping 3rd degree math as your primary will work better, because the tool won’t ever try to rebuild it for you.

With that said I use a fair amount of 5th degree geometry, because it often helps keep your surface smooth when trying to get G2 continuity.