I saw this article over at Gizmodo:

Oh, other companies are being hit by this so-called recession? Not Panasonic! It's headed to the top of the tech world on a pile of cordless phones. They're gonna ride this wave forever!

I think design definitely has something to do with this. I shopped for a cordless phone with answering machine last year. I ended up going with an Uniden, because their design centre is in Texas and has hired from Arizona State (my alumni). I’ll talk about the Uniden later, but I was impressed by the Panasonics. They felt extremely sturdy (no rattles, no flex in the enclosure). The graphics were very clear and details well integrated. They aren’t very trendy, but that kind of Japanese minimalism that makes them look timeless. 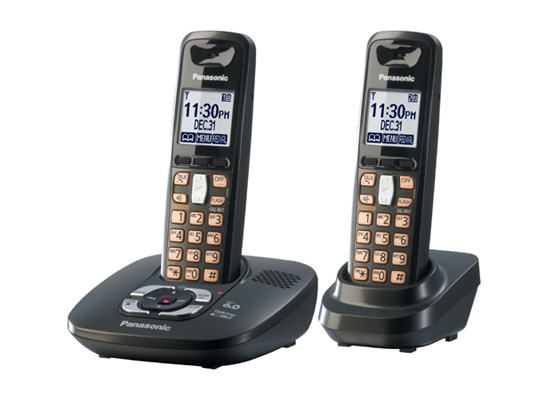 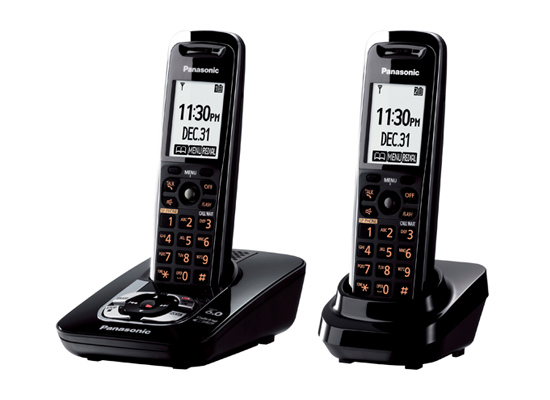 Anyone else impressed with a certain cordless they’ve seen?

The Giz article has the right title!

i didn’t know they even sold “home phones” anymore, corded or cordless

(half-sarcastically). These days with Voip, mobile phones and all, I’d imagine this must be a massively shrinking market. Maybe Panasonic has global leadership, but that’s like saying that Remmington or whoever has the global leadership in Typewriters (sure they must still be used someplace to fill out forms or something).

Last time I looked at cordless phones (and still, judging by the ones above), they all seem stuck in the 90’s at best. Far too many features, functions, buttons and overly styled. If I wanted a cordless phone, how about something like an iphone, but with only the phone function, perhaps even tied to your computer’s addressbook via wifi. Programming numbers and names into a cordless is just about as easy as it was to program names and numbers into those watch calculator/phonebanks Caso had in the 80’s…

The design of these is so set in the paradigms of the past, it’s a wonder actually nobody has ever taken the market over by actually thinking what these could/should do. If it is something to have around your house, how about also making it a universal remote? How about making it impossible to lose in the sofa… so many opportunities, nobody is doing IMHO.

Richard: You have some great ideas there. I have a Harmony remote that you program on your computer and upload the program to the remote (type of TV you have, radio, DVD, etc plus what you need to turn on to do any given activity and change the channel). Why not have a phone with a little USB plug on it that allows you to upload an Outlook address book into it. That would be hot!

The Uniden DECT 3080. You can’t tell from the photo, but they are very thin handsets, thanks to a smaller Ni MH battery. If you’ve ever taken one of these apart, you’ll realize the battery is the driving component in size and weight.

Richard: I think of this Motorola from your comments (ie, just a phone):

BTW, according to the Panasonic annual report:

In the fixed-line communications business, Panasonic
annually supplies households around the world with over
30 million telephones and facsimile machines.

Considering a 20% market share, that’s 150 million units a year for telephones. Not bad. It is a mature market which won’t experience growth, but it will deliver consistent sales for as long as people have home phones.

Is that moto a home phone? It’s pretty hot. Hate the spacey look of everything else. A home phone is not something that should stand out and compete for visual attention. IMHO. It should fade to the background. Where Rams when you need him?..

If they made a modern version, cordless of the Contempra phone, that’d be perfect.

That right there sounds like a throwdown, sir! I smell a sketch challenge!

The Motorola is a cel called the MotoFone F3. It’s made for the developing world, but can be had on ebay. It’s the only cel I would go out of my way for. 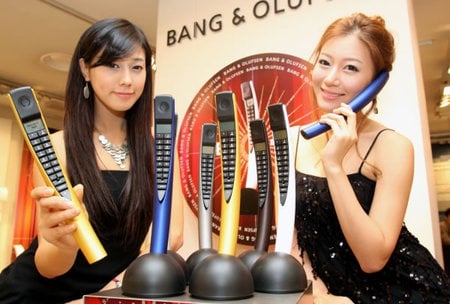 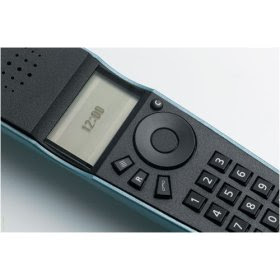 I just bought this phone off Amazon +2 handsets. I like it a lot. It is also a blutooth enabled set, so you can sink you cell phone to it and have you cell phone ring on your house phone (great when you are charging you mobile, or have your iPhone docked). You can also synch your address book with your PC though I have not tried that yet.

Yo: Something I didn’t like about older V Tech phones were the fit, finish and feel of them. The buttons didn’t have any feedback, they felt too light and fragile, surfaces had sinks or imperfections, etc. How does your new one stand up to those standards? How are the graphics? How easy is it to use the deeper functions (answering machine, phone book, synching with your cel, etc)?

It’s not totally ideal. The system phone I replaced was a VTech system from 2000. I first bought a Siemens system, which turns out totally sucked to use, though the fit and finish was nice. I returned it for the VTech which lasted 9 years. I wouldn’t have replaced it, but it was chewing up batteries by the last year even though I replaced all of them with new battery packs.

The new phone is much better, but it is still very light weight, and it is very tall and narrow, which looks nice o the stand, but is a little hard to hold for a long period (but if you have a headset fro your mobile, just synch it). Set up was very easy. There are no buttons, it is a “touch screen” style, not a true touch screen but a smooth surface with graphics that senses your touch, I would assume heat? Short of spend 10x more on a B&O system that might not work better, I think this is the best there is.

That right there sounds like a throwdown, sir! I smell a sketch challenge!

FWIW, while at the bar, on iPhone Sketchbook app. (BTW, looks better smaller) 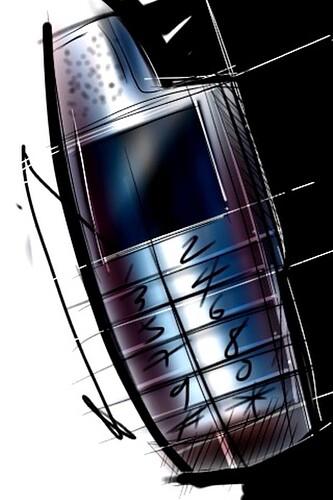 Looks good Richard. I have to ask both B&O and you though, why confuse people by moving away from the standard key layout?

Looks good Richard. I have to ask both B&O and you though, why confuse people by moving away from the standard key layout?

i would do a standard key layout… it was more a doodle and i happened to have a line in the middle there, so… remember too i was at a bar…

Richard: I guess I should give you credit for having straight lines considering how drunk you must have been, hehe.

I figure, go with a touchscreen and maybe let it sit as a screen, rather than standing. Here’s my go: 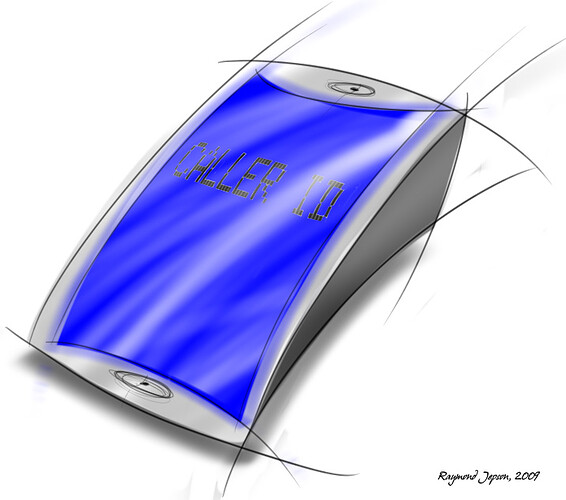 The Motorola is a cel called the MotoFone F3. It’s made for the developing world, but can be had on ebay. It’s the only cel I would go out of my way for.

I’ve hear something from a friend at Nokia recently that the company is no 1 in worldwide cell phone sales, because of their popularity in the developing world… phones with no smartphone features, just a durable case and talk. They apparently put a lot of work into making them nice.

I have been told this was considered a flop by B&O because of some mixed-message branding - because they co-produced it with Philips. I could hardly believe it. Has anyone else heard of that? Maybe because Phillips seems pedestrian and B&O more elite?

Only mentioning it, because I just heard both of those stories in the last month, and here they are

That is nice, looks kind of B&O-ish… the exaggerated length, simple geometry of the phone. I like it too. The logo kind of hurts the whole effect though… IMHO V-tech hasn’t lifted their brand up enough to make it so bold…

the B&O interface is pretty crazy sometimes… very hard to use.

Seems to fit their elitist feel, and the reasons they don’t have easy to use interface might be because of that same vibe; I’m too expensive for you, I’m too post-modern simple for you, I’m too difficult to learn for you.

the B&O interface is pretty crazy sometimes… very hard to use.

Seems to fit their elitist feel, and the reasons they don’t have easy to use interface might be because of that same vibe; I’m too expensive for you, I’m too post-modern simple for you, I’m too difficult to learn for you.

Wow, the honesty of that add is phenomenal. Is it real or just a spoof?