I have a weird problem with my markers. They leave tiny specks for some reason and if I look closely enough I can see that it is confined to the actual fibers in the paper. I don’t get this problem with Prismacolors, Chartpaks, or Letrasets.

Anyone esle have this problem? Is this normal?

This post is a little over two months old, but I have been having the same problem, so I wanted to refresh this thread and see if anyone has a solution.

I have a minimal (odd numbers only) set of Warm Gray Copics and a complete set of Toner Grays. I have experimented with many different kinds of paper but after allowing the rendered area to set for a few minutes the small white dots always appear and make the rendering look rough and ‘hazy’. This might not be a problem on very large renderings, but I am using these for doing environment comps about 6x9in max and often much smaller, so the quality at the small scale makes a difference.

I have tried the following papers:

So far the least hideous results have been with the Copic Sketchbook, but only because the dots seem to be more uniform and thus less distracting.

To make matters more frustrating I have an old set of Tri-Tip Pantone Tria Markers and when I use the very same papers I get MUCH, MUCH better results. Even plain copier paper looks better than the best marker paper with my Copics. The blends are much smoother, colors more saturated, and edges crisp.

But, of course, they are no longer making the Tria Markers like they used to, and the set of NEW Tria Markers I purchased at the beginning of this year have already dried out after being used twice and stored afterwards. (My old Trias were purchased in 2006 and still work fine)


Anyone have any suggestions for this problem? The usual “Use photoshop/illustrator/painter/sketchbook pro”-type answers need not apply.

I heard that they may have fixed the drying out problem with the Trias - anyone confirm? And do they still blend well?

can you scan an image of your problem? I have letraset and copic markers and I use graphics 360 and hammer-mill laser paper. But I do not get white dots, at least that I notice.

I tested out the new trias and the inks seem to be about the same as the old ones (even smell the same) and the blending is just as smooth as always.

I talked with a rep that handles the Tria line at my student store and she said that the first wave of markers Tria sent out in their new line all had problems with drying out. They were recalled, and the caps were fixed and now have been sent out again. There is still a problem with the broad tip catching on the caps when you’re (even slightly) careless with recapping. This is a pain in the ass, but the markers blend well, and the three new tips are a good balance for rendering organic and industrial objects. Also, she said that if I bring back the set I purchased when they first came out that they would replace them no charge.

Prismacolors do blend well, but they are also the most inconsistent from marker to marker in my experience and the colors are a little too fruity for my needs.

I did do some more experiments with the Beinfang 360 and it does produce the best result out of all the papers I tested with the Copics, but it’s also the most fussy to work with, in my opinion.


Here is an example of the problem on bond paper. The result is nearly the same or worse on the other papers I tried, excepting the Beinfang. 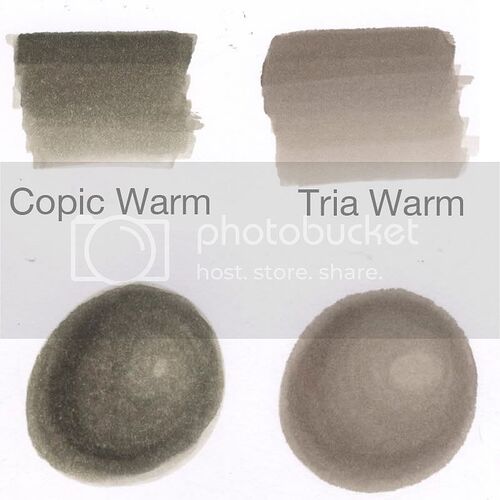