What are the coolest watches for you?
personally the Tag Heuer Monaco, either the old Steve McQueen or the V4.

TAG HEUER Official : Find all sales points and retailers near you to advise you for your Tag Heuer’s luxury watch buying.

And the old Bulova accutron spaceview, any of them

I’d have to say either the Omega Speedmaster (Moon edition)

ooh, I also have a really great one with a picture of Mao on it…his little hand waves back and forth as it ticks along…way cool. I bought some funky Raketa watches made in Russia off of ebay, they are really retro as well

I really like the Oakley watches, but that’s just me

Cool thread, by the way

i think these watches are very innovative-and well designed. they are actually designed by my professor at school-

I have a question-do you think that these watches would be hard to read/ tell time? my friends says that on one of them since it doesnt say am or pm then he doesnt understand- I just told him look out side and then it should make sense-dark sky-night and so on–i think they are easy to tell time-

sorry couldnt get an image-

NookaWatch.com is for sale | HugeDomains

Great prices on a large selection of domains. Find the pefect domain for your new startup.

Call me old fashioned, but I like watches that just tell me the time. I used to have a calculater watch when I was a kid (no wonder I was picked on so much), but now that I’m grown up, I’m a time only kind of guy.

The other main factor I’ve always shopped for is a stainless steel band. Leather or plastic is ok, but there is always a danger of cutting them accidentally, or having them react with chemicals. Not that these are big dangers, but I guess it’s one of the things I learned in high school chemistry class.

This pic isn’t of my watch, but the closest I could find on short notice:

And you can tell time with them too.

RADO Sintra Zircon-Y sintered ceramic/titanium watches. The face is grown from a single sapphire crystal. They resonate when you set them down, and they’re icy cold, and unscratchable…

Yes, I’m in love with the materials

I also want a tungsten ring.

I love my plain ol’ casio film watches. Small,readable, feminine without being too girly-girly.

The one I used to own before I …umm…broke it working in the shop.
I can’t find a picture of the one I’m wearing now, but it’s from the same line.

DOXA.
Man this is like the coolest watch I’ve seen.
http://designgrid.blogspot.com/2005/01/doxa-sub-600t-clive-cussler-edition.html 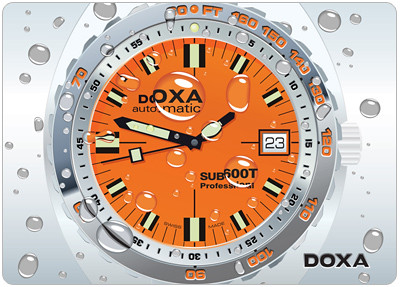 ++ the 360 view on tht link wasnt wrking for me when I was trying to view the watch would have liked to seen diff. views ++

do people think that the watch has lost its edge??

I mean with a watch on many of our daily hand held objects like cell phones, pda’s, ipods, etc…( actually saw one on a pen the other day) is it necessary to even carry one- I do but I mean it seems like after a while the watch could in fact end up extinct>>???

what do peeps think??

I think the Nike you bought is nice Mark.

About the wristwatch becoming extinct, I dont think so. They’ve become more of a fashion than a necessity. Only after reading your post, I realized that for a while now, I always tend to look at my cellphone to tell the time and to set reminders and alarms and not my watch.

I mean with a watch on many of our daily hand held objects like cell phones, pda’s, ipods, etc…

How about a cellphone on:

I never use my cell phone for time reading, dunno i find it against nature, after all it’s just a digital watch on a phone, who says it’s accurate (just the way my brain takes it), and who says the battery life doesnt affect it (when you take battery out you have to reset, and stuff).
I think those nooka watches are quite interesting, but har to tell time, one of the nice things about analog is that you can esily picture the day in the circle, i mean, at a glance, the small hand pointing down says it’s time to go home (if you are really lucky), rather than just saying it’s six.
Agree with cha, watch is a matter of fashion, it’s telling to the world what you want to be seen as. Males have few things to
define their style in terms of accesories, mainly shoes, watch, glasses and maybe some devices, but they still do not compare with a watch in terms of fashion statement.

na this is the coolest watch

na this is the coolest watch

Cool but I always like to know not only what time is but what time it was & what time it’s going to be. Digital can’t do that.

That is really cool

I just bought me this one

A neat and clean design which reminds me a bit of the Ikepod (the face, and the hands, with a bit of imagination), but in affordable.

These watches are interesting, using LED’s for each minute and for each hour…

These watches are interesting, using LED’s for each minute and for each hour…

Now there’s a case where they don’t care about funtion. Somebody needs a class in information design!

I am surprised nobody has posted this one yet. I think it is quite attractive.

agreed, that is a real cool one, though for me it owes 10% to the presto trend

Funny how none of these are shown in use. Are they as cool looking on a wrist?