This was a quick project done as a Finnish Line exclusive. In stores now.

You can also see the upcoming Wade Team shoe worked on in this video. The Gametime in the vid was designed by Brian Kutsch, and the Pro Leather '76 by Tim Liles. 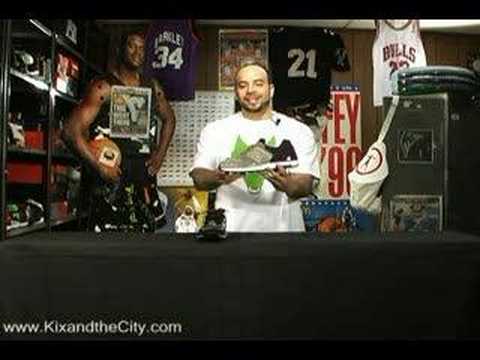 That almost makes me want to buy a high top…and I hate high tops.

The mid line white detail in combination with the texture…very nice.

hey yo, can you talk a little bit to the differences between bringing something to market at Jordan vs Converse. It seems like all the Jordan stuff that you brought to market maintained the majority of details, and material changes, hotness, etc from your renderings. This particular Converse shoe seems to have lost a bit of oomph in the flesh. Maybe because it was a Finish Line exclusive? lower budget? lower street cost?

The product is an exercise in simplicity. No molded parts, or bells and whistles, the goal was to make a solid, fundamentally sound hoops shoe for $60. The tooling was designed by Duane Lawrence for the Converse 099.

I’ll try to get some better photos up this week. All of the details in the sketch are there plus some, but they are all more craft oriented. Stitch lines, and pattern work. This was a very accelerated project (my other work won’t start trickling out until the summer) but I’m excited about it. The white/White version looks super clean.

Clean and simple. Seems a bit dated and predictable…but for a 60 dollar shoe- and a heritage brand I’d say it’s on point! Good work MD.

nothing radical but clean. OK for a $60 retail shoe. its too bad the white underlay and box box shape didnt work out as per the render. looks better than the final sample IMHO.

is the 4 stripe thing a converse thing i dont know about (recessed into the toe bumper and in your bar tack stitch detail on the tongue)?

also, could be just the pic, but the toebox doesnt look as sleek as the dwg. i think the lower mudguard overlay works better going forward of the lateral outrigger as per your design…

I wish the production shoe kept the contrast stitching on the black, I think that’s where the big change happens between the render and product. Cool stuff, show us some more!

Clean and simple. Seems a bit dated and predictable…

Are you calling me dated and predictable?

Dated and predictable. Harsh words Tony. A quick look at $60 hoops product and most of it is super busy with baroque levels of TPU. Richard is right, the whole goal was nothing radical, just a solid, wearable, playable shoe. Not a lot of show, but a lot of go. Not to go too deep into it. Just a quick project I jumped in on to have fun. 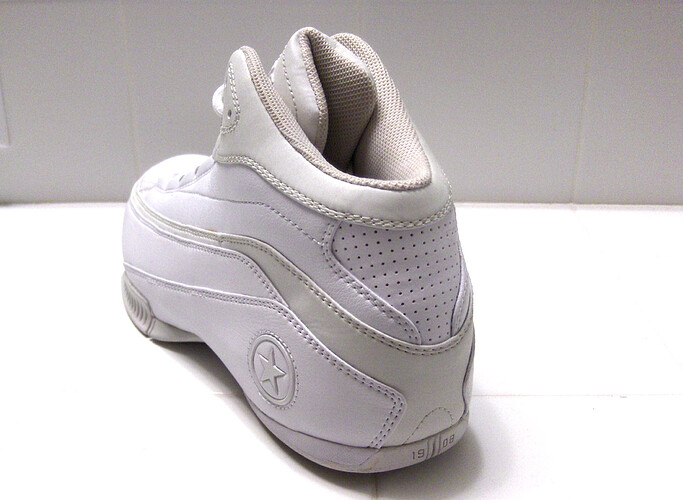 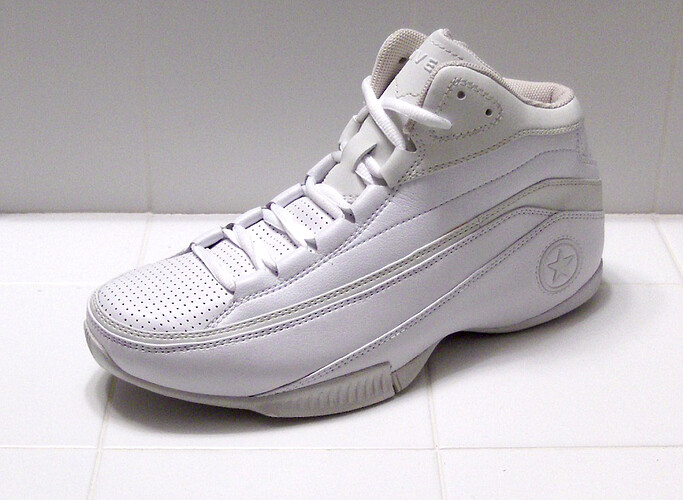 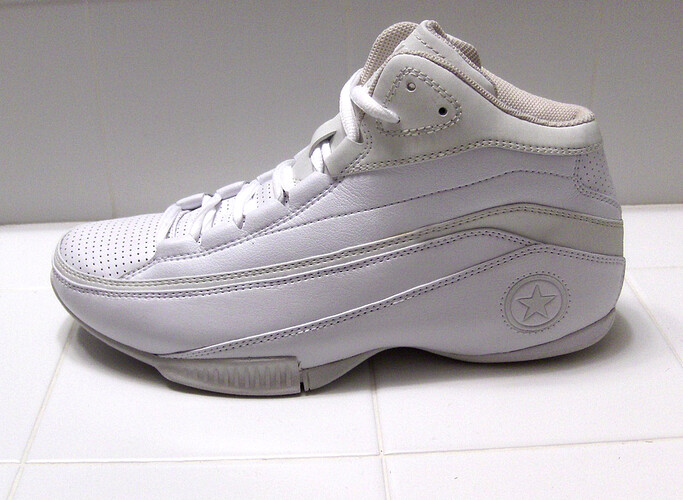 Yo,
I’m definitely feeling the all white colorway. Have to agree with skinny that the contrast stitching in the render helped make the shoe; but I feel like you get that back in the all white version.
Let’s see more!

p.s. also, does the black version have the same perf details?

Not feeling the all black much…but LOVING the all white!

Isn’t it amazing what colour can do!

Argh, my bad Mike. Wasn’t trying to be harsh. That was my initial reaction to the pic. These pics of the white one gives a MUCH better perspective I think. I like the design actually-(the heel is especially hot) and as you said, this is not a risk-taking space boot type of product. I will say that from a craftsmanship standpoint it is probably killing anything out there at 60 bucks with the nice folded edges etc. Most people aren’t putting this kind of thought into their lower pricepoint product, or simply lack the skills to build it. I DEFINITELY appreciate the effort to move away from the plasticized overbuilt garbage with excesses of “percieved value”. I think maybe the pic/angle of the black photo was just not doing it any justice. The nubuck looks a bit flat (as it usually does in pics) and I agree that the contrast stitching on your rendering was making it pop a lot more.

I’ll be sure to select my words more carefully next time and comment on the specifics of the design rather than make quick and unconstructive crits.

I understand and hear ya’

Your right, that black pic is not the best. It is so hard to photo nubuck well (the pic is from the Finnish Line site, photoshoped up a bit). The contrast stitching and tumbled leather underlay did not make it to production. Those 2 things would help it pop… It was a long discussion to get those folded edges… and no center seams…

The black does have the same perf details and sings more in person than the white, but the white photos up very nice. The white has the material contrast. The off white is a low nap nubuck, the white overlays are smooth, and the white underlay has a slight pebble. Finnish Line also has a Blk, Wht, Red colorway. 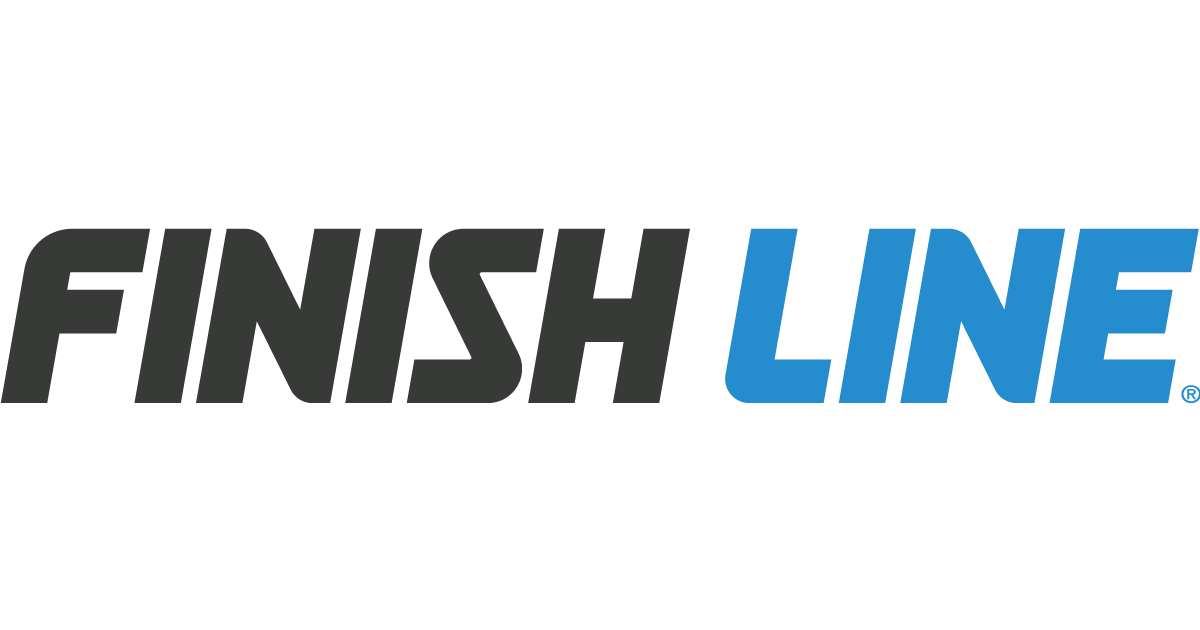 That’s dope. I think a big part of it was the angle was somewhat unflattering. Eastbay makes EVERY shoe look terrible in their pics, just because of the angle. Once you posted up the white ones, you could appreciate more the nice shape of the last and the sleekness of the design.

love that heel…was unexpected looking at the first post. I would def rock the black colorway over the white!..don’t know what u guys are talking about

Call me crazy, but I think it’s product like this that help push any brand in a good direction. I mean, we know what Nike can accomplish with a $150 product, but targeting the (large) lower-end consumer base is crucial, too. I like this shoe for a few reasons. Most importantly though, this product appears to have the same material quality and build construction of the Wade 3.0, Dumalis, or Hops Mid (from a technological front, it’s definitely understandable that sacrifices have to be made). But in the end, it appears all objectives were accomplished. The shoe seems incredibly playable, and at only $50, will probably attract a large portion of customers.


That being said, I have one question for you Mike. In looking at the latest Wade, Transition, Wade 1.3, why do all seem to have so much exposed stitching in the upper, and why does it always seem to converge upon the toebox, lacing area of the shoe?

And all horn tooting aside, I’ve been making a series of Converse Century posts over at Bounce Magazine. Nothing too serious, but thought I’d show Cons some love in their 100th year!

All of the shoes for the season have a common focus on simple shoe making details. I came in halfway through that season, so my main contribution was on setting higher expectations for finishing and detailing, along with a couple of late adds. In the seasons to come, expect to see the unexpected.

I like it. I feel the white color brings out the details of the shoe much better. The way the heel and the ghillies are constructed are nice touches. The tumbled leather would have definitely been nice on the black colorway. I assume the finishline pic doesnt really do the black colorway justice.