This is my first attempt at a basketball shoe rendo. Any comments would be appreciated. Thanks all. 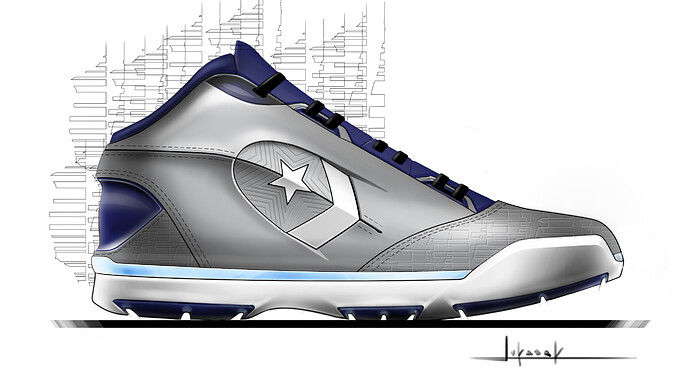 I work as a car designer, but have a thing for sneakers…go figure they have so many similarities. It’s great to see such an active online community for this topic. I did these sketches at lunch last week. 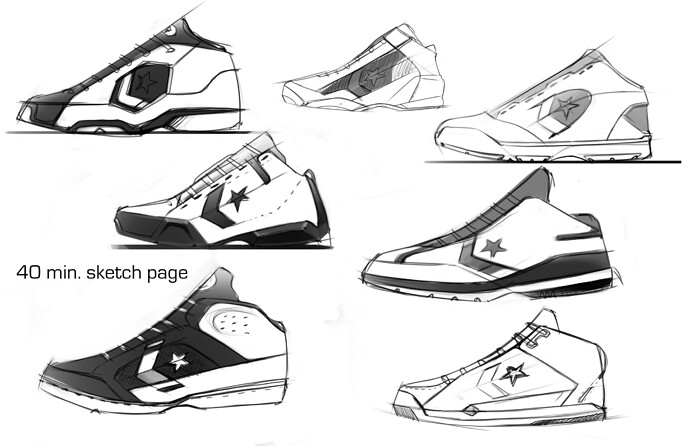 thanks for sharing - look forward to the possibilty of seeing more!

Hey, Thanks for the message. I will definately be posting more stuff. I have always believed that a designer is a designer and can work in many fields. The differences between many designers are their experiences and not talent. Give a good shoe/product designer a little time and he/she will probably be doing cool cars in no time.

Oh, and welcome to the boards dude!

Are you using Painter for these?..if not what program? I like the exploration. Be good to see some more…and throw in a car sketch for a bonus!

It’a acctually photoshop, but I often use painter for the line work when I bring my sketches to the next level. You can’t beat the line quality of painter.

You can check out my small portfolio of images to see some car sketches…I can only show the few that have been made public from my showcar and some school work. 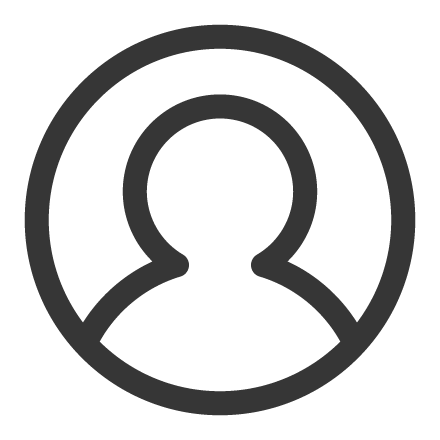 My aim is to create innovative and beautiful designs which fuse technology and emotion while respecting the end users experience.

Thanks for the interest. I’ll be posting more very soon.

cool stuff, I dig the thumbnails a lot!
There is something about the rendering that is a little unsettling, not sure what, maybe the proportions and shape…???
Looks like it’s leaning back or something.
I don’t know…
Anyways, cool stuff, thanks for posting.

Thnx…I see what you mean about the rendo…I think I need to fix the proportion of the area from the laces leading up to the tounge. Great comment. Now it seems so obvious to me.

This is an Adidas running shoe. The details of the thinking and process are in my coroflot portfolio under the shoe section.

It may be a bad idea to re-visit an icon,but …

I wanted to challenge the current proportional trend of basketball shoes. They often apper thick and heavy. The original Chucky was thin and pure. This updated chucky tries to capture the original proportion with the addition of some basic biomechanics. 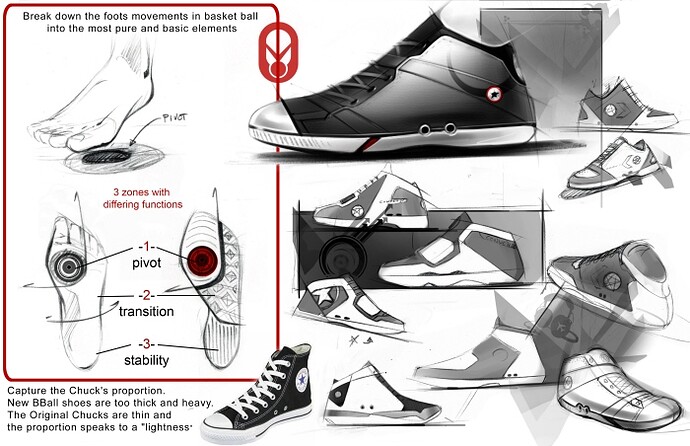 Good stuff Pull. It is getting better with each sketch. You seem to be getting a bit more sensitive to the materials in this last one.

your not too far from these:

I love the treatment of the logo. I abstracted it in a similar location, but I didn’t think that one could alter the logo in a real shoe. I’ve always heard that nike is super tight about how the logo is used.

But where are the 2 iconic wholes? I think that they are an important part of the image.

I’ve also started playing with ps filters a bit. I have a lot of ideas for fabrics especially for the adidas shoe but I’m not really sure how to render them yet. I will check out the tutorials listed ok the site.

playing ball all my life, I gotta tell you that the #1 thing is the ankle support. yes, you see some guys playing in low tops, but most of them are shorter than 6 foot. #2 cushioning…you don’t want to play in sneakers with two little cushion - your body will be shot in no time, but at the same time you don’t want to be “sinking in the sole”. there is a fine line where you have enough response from the shoe to move quickly in all directions without feeling like you are stuck in the sand. #3 - weight, although nowadays, i don’t think it is a problem. I used to bring my climacools to just run sprints and suicides…they were torn to hell in a week, but they were sure comfortable. I would switch the shoes as soon as the conditioning part was done…in college, we got a pair of adidas sneakers (i think those were the garnett team shoes) the second part of my freshman season and nobody wore them - they were so damn heavy. we used to call them bricks. #4 - the running shoes, are made to run straight forward, while the basketball shoes are made to change movement in every direction. thats why those climacools would fall apart. #5 - you want to feel like your feet are protected. running shoes have a lot of mesh - which breathes really good, but as soon as you are kicked in the ankle or Achilles tendon in the lane you would wish that you had the leather and cushion to cover it up. #6 - bball sneakers have different outsole pattern for the multidirectional movement. the tread is not as pronounced, but it creates as much contact with the floor as possible. running shoes, might have more pronounced tread to “bite” in the surface…

I gotta tell you Pull, I’ve been wearing Converse (low tops) since I was in grade school, and I don’t wear “other” atheltic shoes for the reasons nmaloy cites.

But your take on the “trend of basketball shoes” appeals to me … a lot. Box up my old ones, I’ll wear 'em outta here.

Put razor-cut soles (with a bit of negative built into the heel) and mesh fabric on them and you would have a great boat shoe as well .

Pull: how long ago did you work at Renault? And when did you graduate from ACCD?

Lmo: it all depends on personal feel and comfort…I loved the old Iversons, which were between mids and lows…after one sprain i never went back to wearing them.
i was just pointing out the useful differences on the court. style-wise, basketball sneakers make a statement about a certain culture!