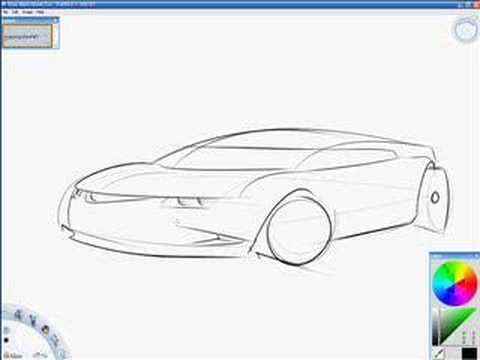 Jungle: nice! could be a new small Acura hatch, or a SAAB…

StyleRIZAL: I really like the sandal concept, but the proportions are so unique that it took me a few seconds to figure out what it is. I think the upper part is way too tall (imagine a foot in there, or superimpose the side view of a foot into it… that is what throws it off for me the most), I really think you have a nice idea there, would love to see you develop it further…

Jungle:
Thanks for posting that vid of you sketching!!! I commented before that I think this is a great teaching aid.

Here are my take-aways:

cool, glad you got something from it. though i would not say say i sketch well, just well enough to get by! if there is a down side to sketching digitally it is the gift & the curse of undo…

some of my friends and i have watched some of the dvds of guys that are insanely good, and you can easily come away in awe because they do it so effortlessly…

Thanks for the comments, jungle. If you consider your skills “well enough to get by” then there are a lot of students I have taught that simply won’t be able to get by.

I have never believed that you need to be a sketch god to be a good designer, but it will definitely get you a job before someone who can’t if everything else is equal.

When I teach I give the benefit of the doubt to the fact that the students can “think”. Anyone can go to the library and conduct research. Anyone can come up with a “good idea”. The designer that can bring that part of it to fruition in the final form is the one that brings home the bacon (ya, I grew up in the '80s, sue me).

I have found that most students who “can’t draw” merely lack the confidence to draw “well enough to get by”. Seeing you make a lot of mistakes on the road to a nice sketch is something that will allow those who need the confidence boost to be able see that it just takes perserverance.

If you don’t mind, I split this off from the doodling thread because it is an excellent topic (and video) and I think it merits discussion without getting the doodles topic off pure “doodling”

When I teach I give the benefit of the doubt to the fact that the students can “think”. Anyone can go to the library and conduct research. Anyone can come up with a “good idea”. The designer that can bring that part of it to fruition in the final form is the one that brings home the bacon (ya, I grew up in the '80s, sue me).

I couldn’t agree more, and it is SOOOOO rare to hear someone else say that. Go to and IDSA national conference and 80% of the content is on things that anyone in the product development process can do, instead of focusing on what makes us unique and valuable, we tend to focus on how we can find commonalities and speak the same language. Both are valuable, I just think we should keep it a bit more balanced.

I have found that most students who “can’t draw” merely lack the confidence to draw “well enough to get by”. Seeing you make a lot of mistakes on the road to a nice sketch is something that will allow those who need the confidence boost to be able see that it just takes perserverance.

I also again could not agree more. Sketching is a skill, not a talent. Just like learning solid works, its about hours spent in the seat learning it. Most of the people with “talent” just spent a lot more time when they were younger. Saying it is talent, something that was given to a person, is an insult to all the hard work they did to get to that point. It also alienates people who can’t sketch well, and makes them believe no matter how hard they try, they will never sketch well. This just isn’t true. With the right instruction and practice, it can be learned.

The goal is to flush out, visualize, and communicate your ideas. To think on paper, and get that thought across to others clearly and efficiently. No need to be a divinci.

Like you said, IP, a lot of it is confidence. Sometimes, it is just the confidence to make a mistake. As my Father-in-law says (a lot) “sometimes the accidents are the painting”… sometimes that stray line, smudge, is what makes the sketch hot… and a little more human.

That’s my take on it… what do you all think?

I’ve found that in the drawing classes I teach, Sophomore, I-II, it’s all about building confidence in the students. Getting them make a mark and commit to it is so hard. They’re afraid to make a mistakes…I remember a quote form Kimon Nicolaides, old school drawing book, he said “The sooner you make your first 100 mistakes, the sooner you can correct them.”

Yo, totally agree with you on the “time in the seat” analogy. All kindergardeners draw at the same level but most people stop drawing in middle school. Then there’s the kids who just never stopped drawing…they effectively have a decade more of drawing experience than their peers. I read that theory in a book too…can’t remember which one. Maybe “Drawing on the right side of the brain” or is it “Left”

i agree, i think it is strange that classmates that were very good designers who were used the “process” of arriving at and evaluating a solution repeatedly were so frustrated by sketching to the point that it made them devalue their other more arguably important skills…

honestly i also find it sort of strange that for something that is losing its importance in the process, it is still so important?

drawing is definitely is a mileage thing, and though at many points drawing would shift ranks in its importance to me, i never really stopped so i already knew well frustration of trying to draw things…i say i draw well enough because oft times i really struggle trying to get that idea out the way i see it. that is the difference; someone who draws well gets the idea out true to that idea and then proceeds to iterate…

I think I originally heard the phrase here on the Core boards, and I found myself repeating it like a broken record in class:

You can see the basic understanding of form and perspective in the students, but they get so focused on a line they grind it into the paper. Run over it a thousand times. I found that after a semester of beating them upside the head every week that they finally saw it. And it was an amazing thing when they did. The smile on their face was very similar to the pride of a 3 year old holding up their “scribble” that you recognize as a snowman.

@ Brett, your right, it is amazing. If you go into a 1st grade class and ask them how many of you kids know how to draw… they probably would all say they could… somewhere around 11 or 12, many loose the confidence…

@ JB_ I wouldn’t fret about it too much. Designing something in your head and then letting it flow out onto paper has more to do with design experience than sketch experience… it will come with time… lots of it. Now, after I’ve designed it all in my mind and I sketch it out, and iterate, I intentionally take time to begin again, to start sketching without preconception to see were the subconscious takes the project. Usually I end up combining the two very different results into something new. Designing it in you head first can often lead you to the same places again and again, even with lots of new information and research.

@ IP_ less drawing, more sketching. My first boss (Aaron Szymanski) would say that to me like 5 times a day. For the first 6 months I wanted to walk out… once I got it, I GOT IT. I think I posted it on here as good advice to anyone learning to sketch for ID.

I meant to ask you this before…how did you do your video?

I meant to ask you this before…how did you do your video?