Maybe some of you remember the discussion in the general forum about Dennis Palatov’s car, the dp1. http://www.dpcars.net/

After realizing we where both in the same city, Dennis invited me over to check out the dp1 in person, which is pretty hot I must say. He encouraged me to refinee my design further, and we are going to team up with Wyatt Turner and try to build this variation.

Thought you might like to see how it is progressing so far, these are still pretty rough, but it should give an idea of where it is going.

I’ll try to keep this updated as this goes on.

very dope, that discusion could have easily got ugly. it is cool to people actually come together here

I imported the Solidworks chassis, and now I can see some interferences.

so most of the work will be in the pod areas, then I’ll move onto adjusting a few other small surface details and then I’ll do all the vents, lights and intakes.

I’ll send you and Dennis more images tonight when I get home.

in the latest drawings it seems to be evolving away from this original sketch towards something more austere and hard edged. curves have become straights etc. fwiw, i think the original flowing lines of this concept look much better

it’s easy for concepts to look swoopy. they don’t have to fit over real parts. this will take some work. i personally think the progress is great so far. don’t judge it before it’s done, either - this is only the beginning.

of course, you’re always welcome to show us how it’s done

in the latest drawings it seems to be evolving away from this original sketch towards something more austere and hard edged. curves have become straights etc. fwiw, i think the original flowing lines of this concept look much better

Once I started wrapping the forms over dp’s mechanicals, the smooth surfaces began to take on a character I didn’t care for and look out of proportion. The crisp edges I feel will draw the eye to the cars unique proportions in a complimentary way, if it turns out how I’m envisioning it.

The more I try to fit to that chassis, the more problems I run across. Things are setup in a non-symetrical fashion.

The model as it sits right now is only the basic form, slowly I’ll get it all shaped to suit the car best.

I’m starting to think that maybe mixing those 2 concepts you did, where the 2 pods were more integrated into the main body.

For now I need to figure out how to make the cockpit pod and engine pod match each other. And I don’t think thats gonna work.

as you can see in this image

Doing a more contoured shape like you suggested with concept v2 with the more flamey looking design.

doing that I might get the 2 nose bumps we are after from the pods, I can then make the outside where the engine is, flow outward a little more.

After fighting with it for a hour last night, I think to make time pass I’ll do this as a test and see what you guys think.

Yo, if you have any free time, see if you can sketch over that pic, and see if you can make it a little more non-symetrical. I’ll play with it tonight for sure.

will do, so you guys know what we are talking aboout, I sketched this up as a second option to resolve the double hull structure and unify it into the design:

this is exactly what i was talking about

it’s a good illustration of where several hundred hours of design work went on the existing bodywork. my process was very similar - first do some concept sketches, then do the mechanical parts, then do a sketch that more or less fits them, then try to get the CAD tool to come close to the desired form (earlier versions of solidworks were really unstable with all the curves but the program got better over the 3 years and i got better at using it).

here was my progression: 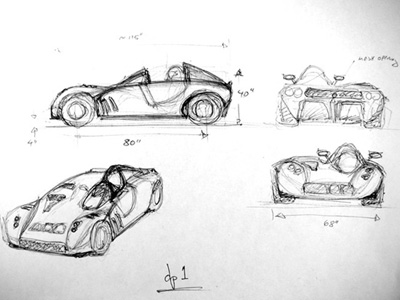 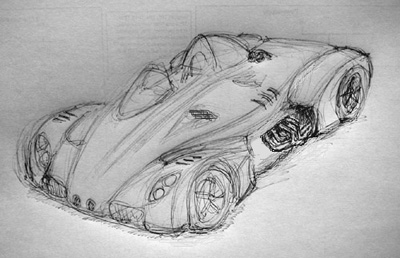 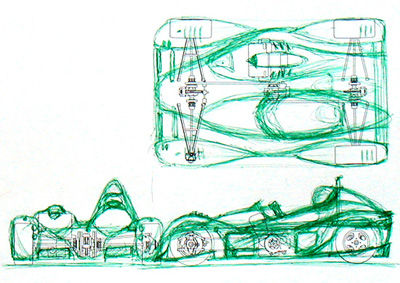 and another 7 months after that

and finally after another 8 months this:

note that the car’s proportions are actually quite challenging - it’s the same overall length and wheelbase as the original mini but 20" lower and 18" wider. and it’s not symmetrical. easy task, right?

Great to see this kind of work on the boards. Thank you to Yo! and everyone else involved for sharing.

I like the look. It reminds me of the second gen Panoz LeMans prototype mixed with that TVR racer posted in the transportation forum a few months back.

I have to say I still like the original bodywork better (partially because its easier to see in real world photos vs. sketch) mainly because it seems to resolve the front end a bit better. The newer sketches seem to have a very stubby front end, which would appear to have poor aerodynamics, and really accentuates the short length.

BTW, I must say that the DP1 is one of the more impressive cars of any sort that I have seen. Been great fun reading about its development. Especially impressive considering what say GM spends to develop a car with all of their experts, yet here is one person doing a huge proportion of the same thing on a vastly different scale. Impressive, would be awesome to see it in action one day!

I think that may be the way you are reading the sketch. By dividing up the width into several long forms that run the entire length of the shell, it should make the car look longer and leaner, cleaner and more unified. At least that’s the way I am envisioning it, if it works is something else…

Wyatt has been cranking on the model.

think the move to angular shapes is a good one. without bashing SW, the earlier CAD had noticeable kinks.

what i’m not liking is how the two hulls are edgy, but then you have these soft forms on the sides and around the wheel wells. the design isn’t coming together imo. post a bigger persective shot of the upper right and i’ll sketch what i’m thinking. unless of course that’s a diff color since its not yet been changed.

wow! looks like a fun machine to drive~ kinda of like a 1/3 Panoz! was aerodynamics taken into consideration or tested on physical model?

To some degree. dp is pretty knowledgable about that and helped us to implement some simple areodynamic theories: here is where we are at:

This was just a random thought I had halfway through the process, sketched on a crappy piece of trace, and mostly I think influenced by the fact that I just got a TT, but I thought I would share: