I was just browsing the vintage sketch thread and thought of something that maybe the wisest amongst us could answer. It’s so easy to make photo realistic renders based on 3D models today. Has the increased fidelity of concept presentation (marker sketch v. photo realistic render) changed the client/designer relationship. Or how has it?

It has removed an element of subjectivity from the relationship.

I believe it has allowed clients to jump to conclusions premature in the development process, reducing our available creative window. I guess the upside is faster development & client approvals.

Even in design school, professors would say “You’ll be judged on the level of your presentation” and that will still be true for how you present. Even a 5 minute Keyshot rendering on some basic cad will make the design look “finished”.

Sometimes it’s valuable to keep that sketch, or present renderings in a “Sketch” format (render in a white diffuse material, add some pen strokes after the fact, and throw some penned in notes on top) so that it doesn’t make it as obvious that you already have a full 3D database ready to go.

That’s one nice feature about Alias - they make it easy to use your 3D curves to “Snap” to if you’re willing to learn their legacy sketching tool. I’ve seen some people use that method very effectively. Nicely polished lines and line weight with accurate shading, but it doesn’t look like a finished production database ready to ship to engineers, so people are willing to treat it the same way they’d treat a sketch.

This is the way I try to think of it: I’ve got to make sure our team uses the right communication tool for the right moment in the process for the right audience. Otherwise things can get squirrelly and sideways. I think one of the keys is to not shortcut the internal process. To remember to sketch (in both 2d, 3d physical, and 3d virtual, and back again), to iterate, build ideas collaboratively with different disciplines always backing up and making sure it hooks into a larger strategy and solves real not invented problems for areal people, and refine the design with product development and engineering.

Just because something looks finished doesn’t mean it is. Over the years I’ve had many other people in the process see something that looked polished and say “awesome, we are done” only have to tell them it was actually sh!t and needed a few more weeks to percolate in design refinement… and this goes for any type of design communication tool. A polished 2d rendering too early can have the same misleading effect.

The only thing that matters is the final result. We don’t design sketches, or CAD models, they are just tools to move the football down the field and advance the idea in its transition from concept to production.

The kinds of design representation you present will always influence the way design is ‘read’ by a stakeholder. The fidelity of a 3D CAD model may not only make the client jump to conclusions about how ‘finished’ a design solution is, but has implications for the less experienced (students) and their design work.

Too often the student displays a glossy CAD image as a kind of trophy or final outcome. The question is - is it good design? If not, then why and how has it happened? I think a deep understanding of how the design representation is used to support a process of design is required. Once this is in place the designer is able to deploy various representations to address different design contexts.

Yo’s post shows evidence of this I think. I’ve also seen it - and studied it - first hand in the work and practices of seasoned designers. I don’t know this, but I would guess the fundamentals that underpin the client/designer relationship have stayed the same. And the same mistakes have always been made in showing a stakeholder something that may appear too finished or not finished enough. Having said that, there is I think something particular about the photo realistic render that can dazzle. However, i think - like CGI in movies - the shine may be starting to fade a little now in that when you’ve seen one supper slick render you’ve seen them all…

Lo for the days when one of Syd Meade’s skill level (pick another designer) were considered “a super slick render” ( as if they are not still considered super); the “audience’s” expectations have been raised significantly. Still, being able to dash out a detail sketch on paper in the middle of a meeting can cement a client’s belief in a designer’s overall credibility. 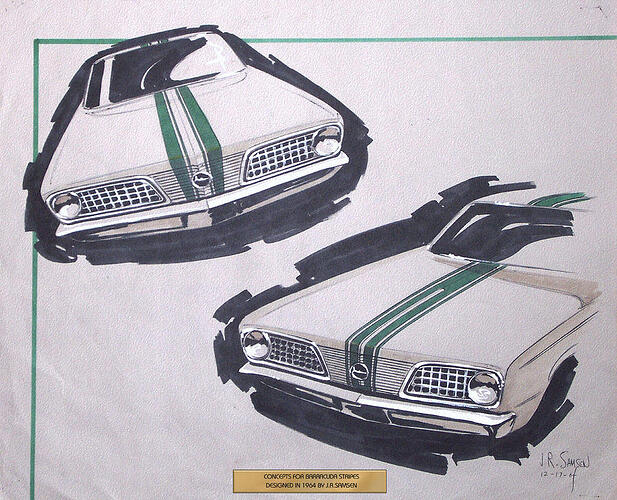 Good clients believe in the process and are willing to pay for it.

Bad clients say they believe in the process, but they can’t afford it. They want to jump straight to the final render and see the sketches, presentation sketches, photoshop/alias renders as a waste.

Maybe it just always comes down to good client/bad client.

I’m really learning the truth in that when one is 20-something we think we can change the world and when one is 30-something we feel that we can’t. Not necessarily a bad feeling, because before when I couldn’t convince a client, I felt like I failed. Now I feel like they failed.

I’m really learning the truth in that when one is 20-something we think we can change the world and when one is 30-something we feel that we can’t. Not necessarily a bad feeling, because before when I couldn’t convince a client, I felt like I failed. Now I feel like they failed.

Then you hit 40-something and you realize that your skills truly can change the world and you’ve been wasting them on helping other assholes make a shit pile of money that want to nickel and dime you to the end.

Oh, shit…that was my out loud voice.

Then you hit 40-something …

Then you hit 40-something and you realize that your skills truly can change the world and you’ve been wasting them on helping other assholes make a shit pile of money that want to nickel and dime you to the end. Oh, shit…that was my out loud voice.

Here, here. Thanks for that!

Lo for the days when one of Syd Meade’s skill level (pick another designer) were considered “a super slick render” ( as if they are not still considered super); the “audience’s” expectations have been raised significantly. Still, being able to dash out a detail sketch on paper in the middle of a meeting can cement a client’s belief in a designer’s overall credibility.

I had a chat with a CEO last week who said they snagged a big contract mainly due to a low-fi (but good quality) card model. He said there was something magical for the client to be able to hold an actual thing.

In my experience, a concept presentation is as only as good as the diversity and art direction of the concepts presented.

Providing the audience that is filled with a variety of experts in their field (i.e marketer, engineer, designer, purchasing, manufacturing etc.) a variety of concepts to apply their expertise to, allows the designer to explore and measure sentiment among the development team members/client.

It is the concepts that have a variety of fidelities that are able to manipulate the perceptions of the audience in a variety of directions. The seasoned designers here know how to “art direct” the best concept in order for the one best concept to be seen as favorable by the majority of the team.

HiRes 3DCAD renderings can communicate the level of detail that needs to be discussed and debated in a concept meeting. So can marker renders. The engineer knows that he/she has their work cut out for themselves whether or not the concept was presented in marker or hypershot. The marketer knows all of the coordination that needs to occur to get the product on the shelves.

Just don’t put a marker rendering up against a hypershot render in a meeting and then recommend it as the best solution. Fidelity comes from the designers ability to execute precision, not in the model or image.

In my (limited) experience a lot of it has to do with the amount of imagination the client has.

We have one client who can’t visualize anything without an ultra-photorealistic render of the thing, and we have another client who’s totally cool with hand motions, sound effects, and scribbles on paper. They have nearly identical products, but we have to use opposite approaches with them to get to the same end result. I prefer the one that can use scribbles on paper since it saves a ton of time: I can print out what we have so far, draw all over it, scan it in, then email it to him and get a quick response vs painstakingly CAD modeling and getting the lighting and materials just so and spending forever waiting for an HD render before I can get a response.