I am currently working on my thesis project, for developing a two wheeler based medical emergency vehicle. The vehicle aims at easy maneuverability in traffic and in narrow spaces(like narrow lanes etc.). My idea is how about an extra wheel to a two wheeler and making it more stable and fast on road. (max speed 50-60kmph).
I would like like your views and insights about how a fully stabilized and comfortable ambulance be developed. The key points I need to take care are Protection(from weather/ accidents etc), safety (dynamism of vehicle/ stability) and speed (have to reach hospital in golden hour). 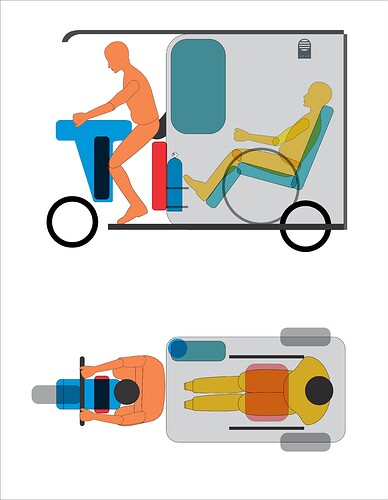 A third wheel makes sense, maybe consider placing it in the front with dynamic steering, so the wheels lean when they turn.
Overall I think the idea is interesting - I’ve seen ambulances get stuck in city traffic when cars have really no where to go and it takes precious time for them to figure it out. That being said here are some other things to consider:
-How often do ambulances get stuck, and their sirens ineffective?
-Often the patient riding is receiving care while in the ambulance. Will this still be a possibility in a narrow vehicle? Or is this vehicle for specific patients / situations?

Exactly, as when I started studying the dynamics of vehicle, I wasnt able to figure it. In which configuration the CG will be well balanced and without compromising the overall dimension. I felt if I consider the case of side car ambulances that were used during world war, there was no traffic situation and so the maneuverability was pretty easy. But side car follows some issues for balancing the CG at proper position, and also the turning radii.
So how is the idea for making it with a side car? which could resemble the idea of that in war!! 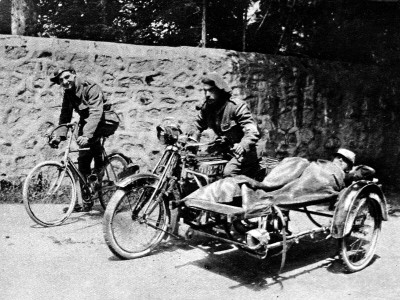 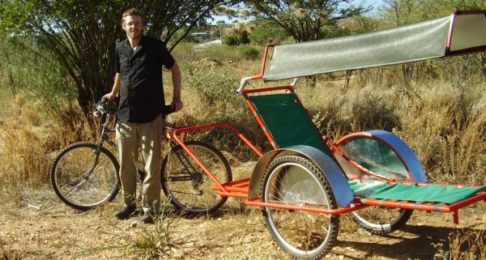 Some inspiration on what not to do…especially in an ambulance

(Top Gear and the Reliant Robbin) 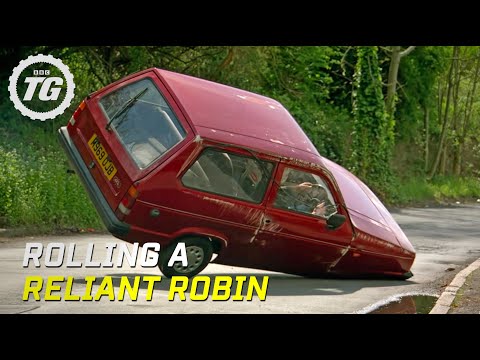 Two wheels in the front and one in the back would be a much safer layout.

Some inspiration on what not to do…especially in an ambulance

Two wheels in the front and one in the back would be a much safer layout.

I was coming here just to say exactly that!

I think you are proceeding with a very naive concept of what an ambulance is. Unless what you intend to do is simply transport a stable wheelchair bound patient to a hospital you need to consider what equipment is needed in an ambulance before you can design one.

Are you considering the needs of neonate infants, eighty-five year old men, pregnant women, pre-school children, burn victims, patients with broken limbs possibly requiring oxygen and fluid hydration. … . . the list is almost endless. Where will all of this equipment and medicines be stored, some require refrigeration.

The WWII side car ambulance was an answer to a basic question … how to get a patient to medical care. The modern concept of an ambulance is to stabilize the patient on the way to a hospital, thereby extending that “golden hour.”

Assuming for the moment that someone called for your human-powered ambulance how long will it take to get to the patient, and then get to a hospital; obviously we don’t know the distances involved, or the terrain (dirt/gravel roads, etc). Is the “operator” also the Emergency Medical Technician? If so, who cares for the patient during the trip to the hospital? If not, you now have one person “powering” two.

Just some thoughts. It’s an interesting idea, but you’re going to need to spend some time on what it is you are trying to accomplish.

If you’re just interesting in building a human-powered vehicle that another thing altogether.

Seems like a good idea and yeah I think it will need that extra wheel.
I was involved in a few tests with a 3 wheeled vehicle mockup with 1 wheel in the front, for something akin to a bike taxi, and it can be surprisingly stable! I could take U-turns at about 10-15mph without any problem. It all depends on the distribution of weight, in this case probably mostly the driver+passenger and then there’s the liquids or batteries if it’s electric and the frame.
In your current configuration it looks like a problem if there would be one wheel in the front, and there’s only the driver in the vehicle.
The best thing is to analyse all the parameters involved, explore a few alternatives and build full scale mockups out of wood, PVC pipe etc., and simulate the weight distribution with whatever you have available. Also thoroughly test getting in and out of the vehicle as well as comfort issues.
Then there’s all kinds of issues that will come up once you do the field research to find out how to locally implement such a concept. See if you can find one or a few use cases for which this concept has unique advantages, then you can use those to base the story around to sell the concept.
I don’t know much about the issues involved of course, but if I look at your packaging drawing it just looks very boxy and high, and the passenger can not lay down.
Why not think more in the line of: 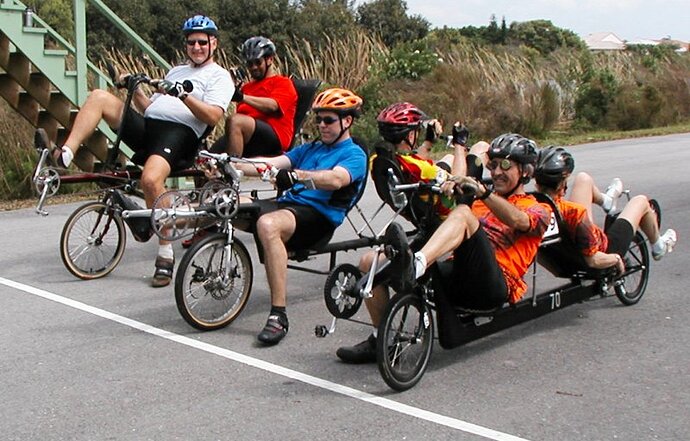 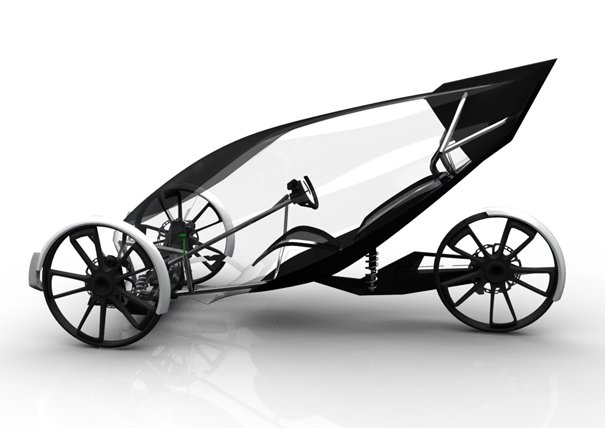 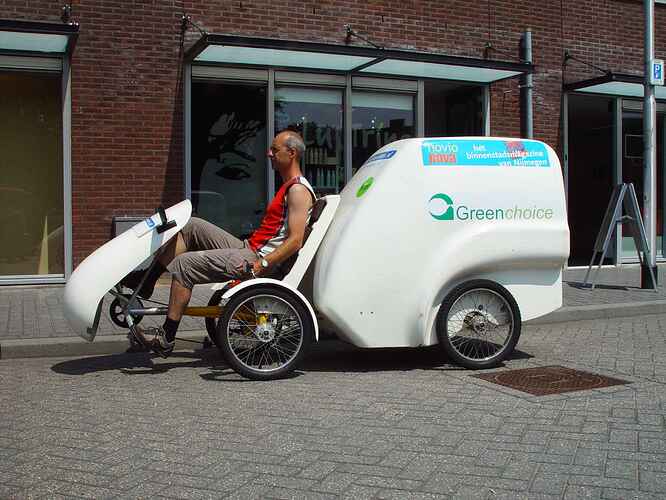 Ya actually, I thought about doing an inline too, and there I felt what and how will the patient will be taken care of while driving. And where will driver concentrate while driving.
And about vehicle, it will actually be an IC engine based vehicle and not human powered.
I would like to know which configuration will be best suitable for the purpose:

The design process is still going on, where I am working on the form of the vehicle. The package drawing which I have shared is just for overall idea of the project. As the project stands some right issues, I am not able to share the final design.
But surely all inputs are very very insightful, I am working on them, surly I have too many doubts remaining which I will keep posting.
Just wanted to clear the brief
“Design a two-wheeler based ambulance for Urban city with too much traffic congestion”

Have you considered looking at the rescue sleds that ski-patrols often pull behind snowmobiles?
These teams have obviously spent a lot of time working on how to efficiently transport patients using a very small and manoeuvrable vehicle.
Might be hard to use a sled per-se without significant shock-absorbers, but the general layout might be useful.

Root: am·bu·late; to move from place to place : walk

So, in it’s most basic form an “ambulance” simply moves a patient from point A to point B. Adapting an existing vehicle, epecially a motorcycle, to another purpose is cheaper than starting from scratch. 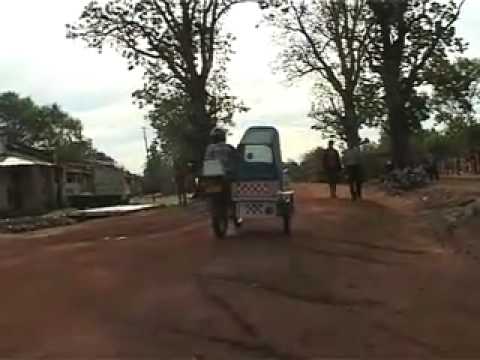 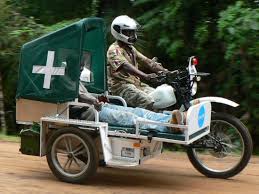 Just be aware, that a “sidecar” being asymmetric is not a stable vehicle for an unskilled driver; having designed, and ridden sidecars for thousands of miles is my qualification for saying this. That is not to say that they would not be candidates for this application, it’s just something to consider. What the driver below is doing is very easy to do and totally controllable… if you have the experience to do it. For the beginning driver this usually happens the first time the try to make a right turn and the weight of the sidecar tries to transfer to the left (and over) the motorcycle. And navigating a sidecar rig though congested traffic is no different than driving any other vehicle with more than two wheels. 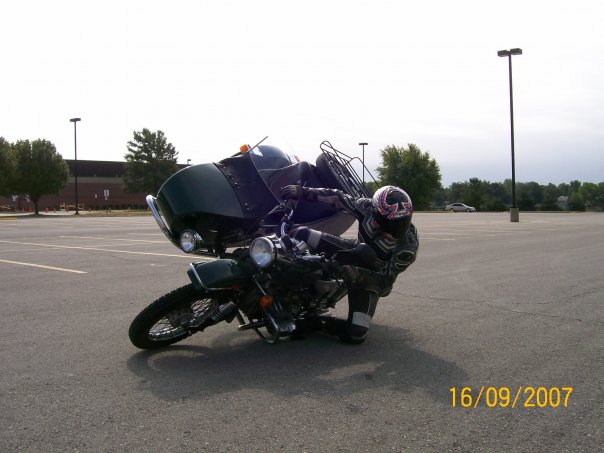 Keep in mind that two wheels can go into narrow places as well. 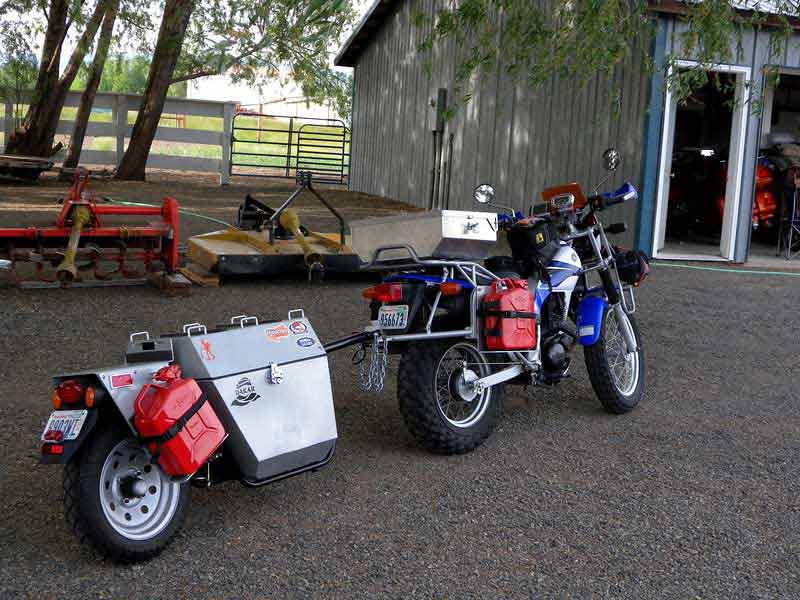 Woow!! I havnt seen the box type Ambulance, Its so proper. But wont it be having problem while turning in large radii? Mr Morris I am greatful for all your replies.
Got a lot of insights. But when we talk about heavily traffic situation and its heterogeneous movement and that too in India, where hardly anyone follows traffic rules, what could be way these vehicles can seek a free path for their movement?
Also I have a query, what happens in trike where two wheel in the rear are smaller in diameter than the front wheel. (Like putting a bike wheel in the front and the scooter wheels in the rear) Will there be any slip or any problems with the vehicle dynamics? 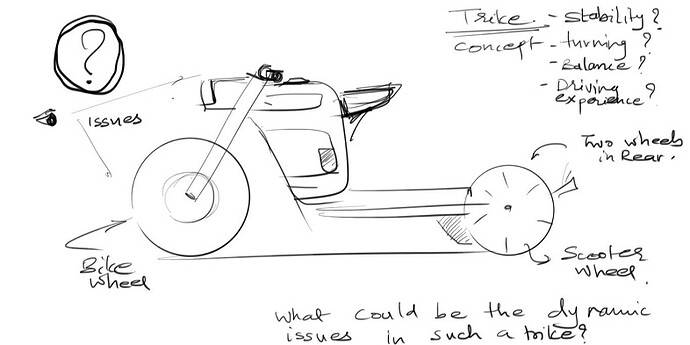