I wonder if any of you guys could help me. I am currently researching into a product for colour deficient creatives. I myself am mildly colour-blind, but do not feel it makes me a lesser designer than non-deficients.

If you have any level of colour deficiency I would be really gratefull to hear your experiences, and coping strategies.

What problems do you have in design, or simply in day to day tasks?
And how do you get around these?

p.s. you should be able to see a 74 in this image, if you see 21 or nothing then you probably colour deficient 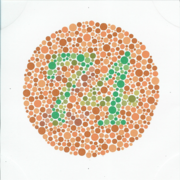 I dont often find it a problem. Driving at night has been the bigest ‘challenge’ (its not actually that bad).

Red lights tend to ‘wash out’ when surrounded by other street lights, making it slightly more difficult to recognise the light as being red. Normal day to day use, no problem differentiating between the lights.

Except for the odd poorly designed poster (i think graphic designers have caught on that 70% of the male population has some level of colour deficiency), i rarely experience a problem.

I still stumble on pink/purple/blue type, but you get used to it.

In college we had an instructor who taught vis com class. All he taught was gray scale marker sketches, which really helped me in expressing form. I thought he’s awesome for giving us such a training.

Then, two semester later, a friend of mine said he’s actually color blind.

thanks for the input,

Thats interesting you say about your tutor who worked in grays. I think its a great skill to have, if your design looks great without colour then you know you are on to something.

Thanks again, I’ll be posting sketches etc as it advances on the progress board so keep an eye out and any feedback would be welcome.

So only two designers are willing to come out of the closet? That’s sad.

I’m red-green color blind. I don’t find any problems in work. Except, a little when I was designing ice skates. I mixed up some brown and burgundy pantone samples in my computer. I had to ask others which was which. It wasn’t a big deal, but my boss did have a conversation with me that amounted to, “Never tell anyone that I was the one that hired a color-blind designer”. Hehe

Unfortunately, that is the level of color-blind awareness in the population. To be honest, I would have never known until University had it not been for a test to enters honors courses in elementary school. Strange how little it effects us.

As for my everyday experiences, I have a similar problem to tbaker. I see the red in stop lights, but the green always looks white to me. Especially when the lights are horizontal. This is because the brain is powerful. Once I know something is green, my brain will see it green. Horizontal street lights are rare and sometimes in a different order than vertical lights, so it throws off my brain for a second.

Other than that, I occasionally think pink cars are grey or green and dark green cars are black. Medium or bright colors I recognize right away.

Coping skills are the same as in everyday. When I use specific pastel shades I make mental note where and when they are used so I will remember later on if called upon to describe or explain something in the design; i.e. “the cyan line…” knowing it is cyan, not pink.

Same thing with CAD models, if someone makes reference to the green surface, for example, I make mental note of it so I too can refer to it as green, hoping to myself the fool designer hasn’t got a similar orange surface!

pier: Should we add our disability to our resumÃ©s?

70% of the male population has some level of colour deficiency

is that really true? i heard there is a much higher incidence of some form of color blindness in men, but 70%?

yeh from what I have found its about 10% of males of which red-green is the most common.

The thing that amazes me is how mis-understood it still is. Yesterday, I was in a design lecture and a bullet point flashed up on the presentation saying

This is certainly not my experience, and I hate to think 100 or so design students have gone home thinking 10% of the population eats grey apples. I guess the term “colour blind” is the route of the problem.

thanks loads for the input, its much appretiated. Pier: I’m really interested in the stuff you say about colour contrast being benificial to design, will check it out. In WW2 the army used colour deficient soldiers to spot camoflaged army bases etc, so I guess the link is there.

What are you worried about…marketing is going to pick out the colors anyway.

Jackal: Another color-blind designer I know told me the same thing.

Ian: The understanding of the general population, or designers is horribly low. Of course, the knowledge of how sight functions is low as well. I had to describe the difference of RGB to CMYK to someone a few months ago. Darn, is that hard to do! If a person understands how light mixes or how light is absorbed and reflected, it’s fairly obvious where the difference comes from. If they only know colors as separate boxes, it’s impossible.

Of course, sight is related to this. My eyes have all the same parts as a “normal” sighted person’s would have. The only difference is that I lack all of the red-green receptors that I should have. That means that I can see red and green (indeed, they appear very different to me). However, it’s the extremes that confuse the receptors.

Here is an interesting link about color blindness: What is Color-Blindness

And a couple good sites about color:

COLOURlovers is a creative community where people from around the world create and share colors, palettes and patterns, discuss the latest trends and explore colorful articles... All in the spirit of love

Do you guys know of any other resources?

I am color blind, not horribly but just enough to have a hard time assembling color chips from blue to green. I haver been able to get away with this slightly by using a relative color scale. If i know that I am looking at a certain range, I use relativity to get to the next steps. This doesnt always work, but I am rarely confronted with specifying colors so close in relationship. It my actually be apathy instead of color blindness. Its really a fine line.

I have only been in the business since '91 but even in that amount of time I have worked directly with at least 5 color blind designers and a many more people in marketing, development and engineering who are not but have an even more impaired sense of color.

This was on the front page and I thought it was appropriate here. Now everyone knows what we go through:

critiquewall.com is for sale | HugeDomains

I have a mild version of green/brown/gray colorblindness. I don’t really experience any difficulties from it, I just can’t really tell if a shirt someone is wearing is grey, brown or green (I tend to call brown gray and green brown, I don’t call much things green except really bright greens)

When bright blue and red colors are placed next to eachother and not in my direct sight, I tend to see it flicker. I don’t know if this has anything to do with color blindness though.

Most of the pictures in the post I can see the difference clearly. The picture at the start of this topic clearly shows a 21

John Hicks (designer of the Firefox icon among many other things) is color blind and seems to do very well. [/url]

I believe one of our senior managers is color blind. He also says he doesn’t see well enough to balance a drawings two sides or perspective.

Does anyone have a problem with vision outside of color?

kinda off topic, but just wondering- if some people have a deficiency in seeing colors, it would make sense that others have a super-ability. anyone have any anecdotal evidence about this?

ie. being able to see more than the usual spectrum or tell more different shades apart?

too lazy to google and just curious…

also not sure if this is something that can be trained or is inherent in the physical makeup of the eye/brain. just as somepeople have more than 20/20 vision…