This is also my first peice of furniture. Its made from mdf with walnut table tops. As you can see in the picture underneath the middle top is a storage bin for magazines, remotes etc. The storage basket is a metal mesh material. I should have taken a close up picture of the basket, but I didnt think about it. The legs are painted steel tubes. Any feedback would be appreciated. 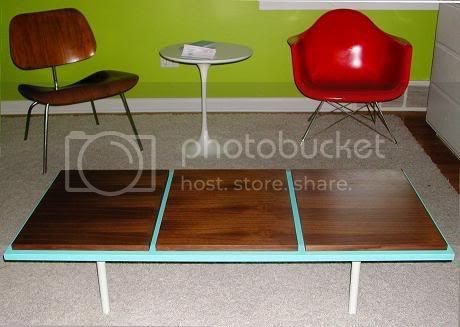 Why 2 colors of paint?

Just getting the discussion going a bit…

I like the thinking behind having the ability to tuck away remotes and magazines…I wish it had hidden drawers instead of those removable tops, I think those will be very cumbersome over time. I wouldn’t want to take those off everytime I wanted a magazine or the DVD player remote…

With the current set up I could see those cubbies being used more as emergency clean up… crap, the in-laws are coming over, put all that junk on top of the coffee table in… kind of thing…

I like what you’re going for, but I have a few concerns
as Yo pointed out, I have to take the tops off to get at my stuff?
So now I have to move stuff to get to other stuff, I hope there is a compelling reason or atleast some fun thinking behind “WHY” on this one.

The legs tend to bug me for some reason, maybe it the proportion.

Where are they placed along the horizontal axis?
I would probably center them on the width of the end pannels on such a minimal aesthetic or have a reason why not.

As above why the 3 tone look?

good call on the leg placement

hi
about the table :

somehow, this coffee table reminds me of james bond - yes, that Surfboard

making the drawer more accessible would be nice, but would detract from the awesomeness of the coffee table…
perhaps you wll have a niche market, but then again, thats what your looking for right?

nice style. i can see the mod influence based on your other eames, saarinen and contemporary modern furniture in the background.

nice concept. there are indeed lots of coffee tables with hidden storage, but no reason why there cant be something better…

on the issue of usability I’d agree. a bit of a pain to take of the lid, and i would imagine it kinda fiddle-y to reposition it and get the pins into the holes.

A better solution could be perhaps if the lids were on tracks that slid to uncover the hidden storage. that way you wouldnt necessarily need to take stuff off the lid before opening it.

personally i dont mind the placement of the legs, but agree a square section would be nice. maybe if they were a bit further to the center to line up with the space between the top panels it would be more resolved and give more of a suspended look (but perhaps not stable enough). i could live with the current placement.

also agree it would be nice if all 3 had storage. i cant see any reason why not. some nice detaiing to hint at the storage function would be good too. perhaps an indent into the side of lid, so there is some grip for the fingers to slide/remove the top. also makes it less knock down/flat pack/ikea looking.

you might wanna paint the side of the inside hole in the blue piece too. the mdf color kinda looks unfinished.

nice piece though. i wish i had made furniture in school when i had the opportunity and a shop…

would be nice to see a pic of the basket too. a metal mesh could be nice, if it was chrome-y like a bertoia chair, but if more screen door material, maybe not so much… 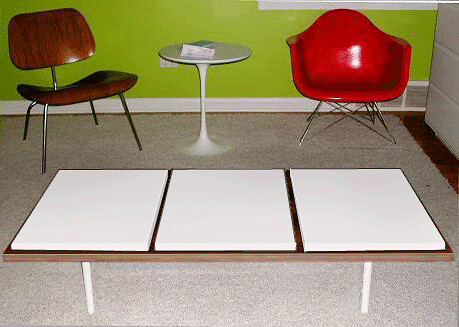 Quick study to see what changing up the color and material application might do. Simplified to 2 colors, so it is more in line with the Eames Chairs in the pic.
I also changed the leg placement slightly forfun. Would consider chrome legs instead of white, but wanted to keep the two tone for simplicity at this point.

That aqua-ish color kills me though! I would go for something more neutral (but that’s me). I noticed there was a link for changing the color palette around - bravo!