This is a digital short done for HIX and West Penn IDSA by Carnegie Mellon University’s student chapter of IDSA. We look at the current IDSA.org and opportunities we see, and we move into a quick redesign proposal.

On October 22nd, CMU IDSA held a Critique Clinic for IDSA’s website. 14 of us met in a room, threw the website up on the projector, and critiqued the design of the IDSA website. We then came up with a new navigation flow that we felt better organized the content, and drew up wireframes to explain our designs. Then, we created Photoshop mockups and compiled this video to explain our thoughts to you guys and IDSA!

The criteria of the competition was that the video was under 10 minutes, so we had to condense a lot of information. The deadline was also rather tight, so we weren’t able to flesh out the design as much as we wanted to. However, we feel strongly that IDSA needs a new look and better organization of content, and hopefully this video will inspire some action. 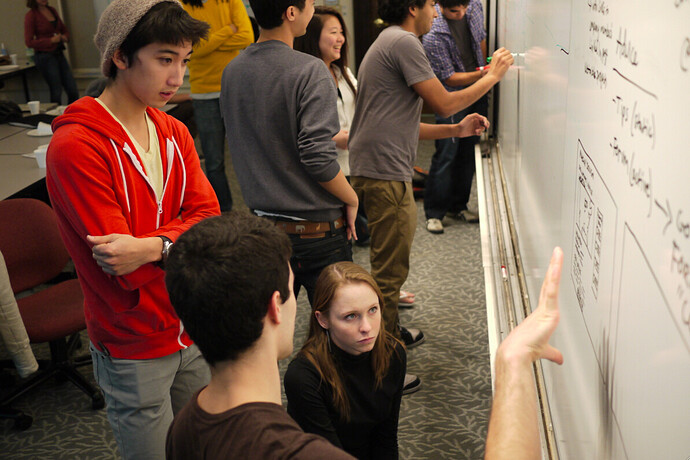 We tried to get a submission to the HIX for our student IDSA group and it fell through. Maybe this’ll give a bit of inspiration to our group and get us up and moving a bit more.

Thanks for sharing this.

Thanks guys! It was quick and unfortunately we’re all super busy with schoolwork so we couldn’t take it further. But it was fun!

Great job guys!!! This is the kind of action we need to change the way things are being done. We (myself included) complain a lot about IDSA, but how many of us actually do anything to change it…Not many. My hat is off to all of you!!

AWESOME! Listen to these guys IDSA…

Overall, great work guys. Any chance of mocking a test site up for a closer look at the interaction? (I’m sure you guys don’t have anything going on, right?

Overall, great work guys. Any chance of mocking a test site up for a closer look at the interaction? (I’m sure you guys don’t have anything going on, right?

Haha yeah. The photoshop mockups were super quick due to the deadline, but I think doing a quick prototype using Keynote would be beneficial to explain the more specific interactions for the actual website. Stay tuned on that one. 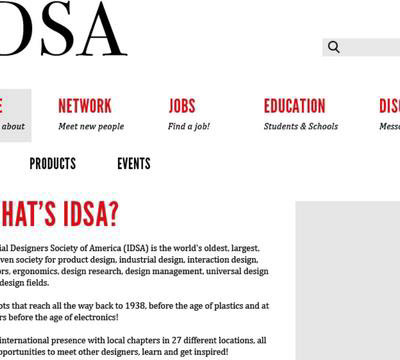 IDSA.org redesign: a digital short by CMU IDSA from Julius Tarng on Vimeo.I like to define design as "Design is the ability to see nothing is as it should be, coupled with the desire and aptitude to do something about it." In a complete...

By the way, this was in this week’s IDSA members newsletter:

• IDSA.org 2.?: Last week, a group of students from Carnegie Mellon University (CMU) unveiled the results of their critique of IDSA’s current beta website. Their work focused on usability and navigability. It provides what we think is some great inspiration for the next steps of the site’s development. It also appears to be the first of a number of crits being generated via IDSA’s HIX section and some of our chapters. Following the lead of the Western PA chapter—who joined the HIX section to support the CMU project—IDSA’s Southern Ohio chapter is working on generating more input from ID students.

Some of my fellow students were looking for the front page posting… but it’s gone now? Carnegie Mellon design students propose a new IDSA website - Core77

I’m not sure what happened, but I put it back.

Thanks yo. People were cooking up conspiracy theories over here… haha

So, wondering what happened with this project and were it went / is going… I had heard some rumor but nothing more. Any update Tarngerine…

About 2 weeks after we finished the video our IDSA officers had a teleconference with a few members of IDSA national. The gist of the meeting was that they appreciated the hard work and thought that went into our redesign proposal but did not have any plans of furthering the proposal into implementation. They mentioned that it was helpful to get a student perspective of the website but that they’d need to collect research from other points of view (i.e professionals) before beginning the redesign of their redesign.

They did ask us whether we wanted to personally continue working on the project, but since we’re all extremely busy college students with incongruous schedules that proposal was slightly out of the question. Especially since that would appear as if we were responsible for a new website ourselves which is a full-time job in itself.

Take from that what you will.

Oh, but they did foot the bill for our Student Lecture Series’ pizza tab.

Yea, there weren’t any real definite actionable conclusions. It’s definitely an interesting project to tackle, but in terms of execution, manpower/resources… I’m not sure college students are the right ones to ask.