My last 3 projects were somewhat ruined by clients who either won’t pay me to do the logo on the product and/or insisted on their own ugly logos or paid some have $100 for a logo they ruin with thier art diretion. I work with a lot of smaller companies and start-ups. My ID on all the products were dragged down by the amateur logos the clients wanted. When I bring it up I usually end up offending the client cause their brother or daughter did the logo or one guy says “my wife’s an artist.” Sighs. I guess that’s what photoshop and rendering software are for…keeping ugly logos out of my designs in the portfolio but sad that the real products are going out into the world with an ugly badge on an otherwise nice ID. Most of the logos simply don’t match and the fonts they use are really awful like ones you get when some kid with DTP sofware at Kinkos does a take out menu. Yuck!

There is a wide gap between a great logo and one that is simply not ugly. Could you modify some of the ugly ones or suggest one that does not detract from your work? bang something together to save your product?
I have recently had to redo some graphics that were distracting on a line of products. It was definitely worth the extra effort.
And as you suggested- if all else fails photoshop the logo out- or do a computer rendering. I bet that a client who does not understand the importance of a good brand identity, will spend the same amount of effort and care on the photography as was paid to the product graphics.

Dude, mp, I feel your pain. I have worked with clients from every sector you can imagine and sometimes expect to design a trade show environment around some really really bad stuff. Then you compound that with bad colors and supporting graphics and it’s a real challenge. I never change a client’s logo, but I often take broad liberties with their branding, colors, or support graphics and find a way to make it work. For lower echelon client’s I will “polish” their logo with an effect or use it as solid color, typically they haven’t invested much in their brand and have no bearing for brand guidelines.

All I can say is try to find a way to work with it. Here’s an example from a few years back, I’m embarrassed to let this see the light of day again especially here, but to be fair though I only had $80k - $100k to work with and rental inventory, didn’t help that the client was very inconsiderate. 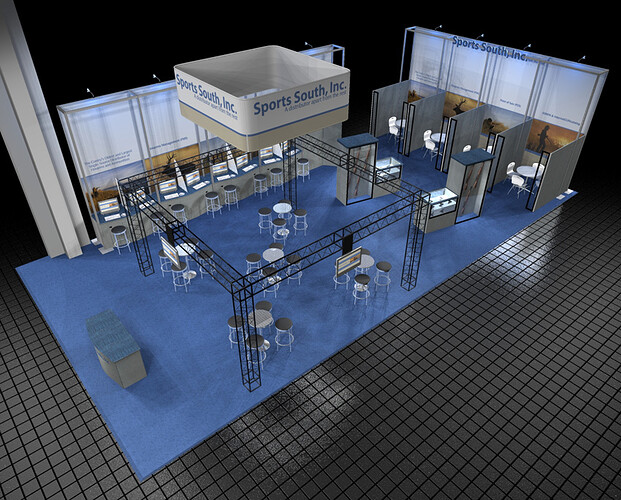 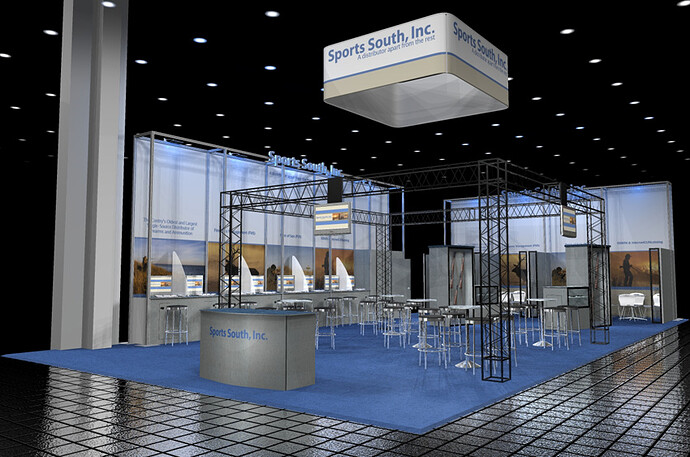 And why did they effectively wall off two ends of their booth? They don’t want customers to enter?

Oh my. Nothing says ammunition like light blue and transparent swooshes! Bonus for the prominent placement of a girl with a headset waiting to take your call!

It’s a catch22. The cheap client isn’t paying for me to do a logo. I started doing one for free to try to save my product design but then he started editing it and asking for more FREE iterations where he turned it into a LifeSaver’s Candy circular logo. Acck! Thast’s when I said, OK I can’t do a free logo if he wants to keep trying out different options so I told him to hire a professioanl graphic designer. So he wen’t to some we’ll do a logo for $100 website and actually got some nice concepts back but lo and behold, he started editing and art directing that designer’s logo too. A month later, it ended up ugly again cause the CEO has a strong opinion of his own logo. It really looks amateurish like some kid took some diner menu font and slapped it on with some swoops. Yuck Yuck!

I was thinking of sending them my free logo but I think I may be opening a can of worms. It leads to me doing more editing work and possibly offending the client. MIght just leave it alone and render nice logos for my portfolio instead. Too bad I’m going to see these things out in the real world with a very very bad and big logo slapped on my otherwise clean design. They are also talking about putting other badges on it too liek they do with computers. Yuuuuuuuuuuck!

Why do people not trust designers. What’s the point in hiring a designer if you are going to jsut have him implement and not design?

The same client wants to leave tool marks all over the inside of the case. They are too cheap and dont want to blow money on at least a smooth surface. I said people will see that when they change batteries. They don’t seem to care about quality so what’s the point in hiring a designer just to pump out their garbage?

And why did they effectively wall off two ends of their booth? They don’t want customers to enter?

It’s a 30 x 80 and if I remember correctly they were in a back corner exhibit space so they wanted it walled off. They also made me incorporate the “decorative” black exhibiting truss in the center. We had an initial meeting with their tradeshow marketing guy who essential handed me an overhead sketch and said make it look like the website. Then when we go to present it turns out that this guy and his boss are in the meeting. His boss instantly hates the design, says that it isn’t even close to what he’s looking for and starts asking why we didn’t do this this and that. Meanwhile the marketing guy just sits there and throws us under the bus by lying to his boss and agreeing saying that the design isn’t what he instructed us to do.

mp, I agree, there are just some (many) clients who do not know how to leverage what a designer brings to the table, aside from that it’s the “I’m paying you, do what I say” model, which is shite.

250 for a 40 x 40 is a pretty nice budget depending on the criteria, is that a design you worked on or one that you bid out?

The same client wants to leave tool marks all over the inside of the case. They are too cheap and dont want to blow money on at least a smooth surface. I said people will see that when they change batteries. They don’t seem to care about quality so what’s the point in hiring a designer just to pump out their garbage?

I was with you on the rest of it, but whats the problem with tool marks inside the case? I understand the case for perfectionism, but why get so hung up on something that will see the light of day for 5 seconds every two months?