I’ve recently published an update to a chopping board design I put on boards about 2 years ago, so thought I’d share. The original design transformed from a chopping board to a shallow bowl, but I wanted to make it transform into a deep bowl.

I know plenty of you will think its similar to the Joseph Joseph design, but I hope its different enough. I was also worried that during folding up, prepared foods would block the design from properly closing and locking, but I haven’t experienced this so far. The project grew after I made the concept model and thought about all the other applications I could use it for. A dust pan and brush would be good, but I decided to have a go at a wheel barrow/yard cart, which has taken on a life of its own. I’m trying to fit it around work, so who knows when it will be finished. It’s best shown/explained in the video: 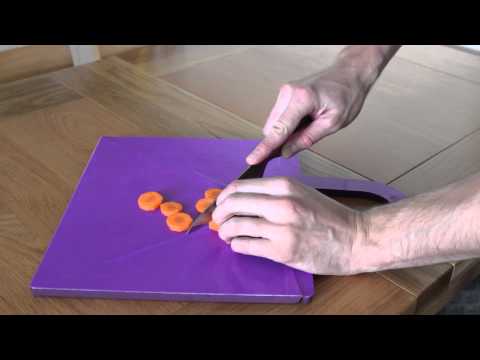 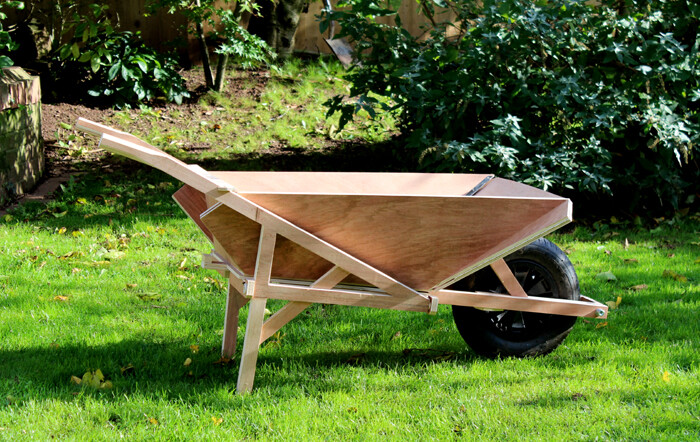 I like the wheelbarrow concept. Seems like it will make it for easy loading. I see one big problem with it though and I think you need to test it with real objects to see if it actually works, but lets say you load a bunch of logs into it while its in it’s flat mode. Due to the weight of it, I doubt you’ll be able to fold it up easily or if it all.

I only intend the wheelbarrow to be used folded up in the locked position, unfolded is just for storage, and transporting in a car etc, but I was also toying with the idea of using the unfolded barrow part as a work sheet, ground mat for mixing cement on etc. in reality I hope it could be made from a single sheet of plastic, probably polypropylene with live hinges, so when folded it would also hold liquids or very wet materials without leaking. I also like the idea that it may be possible to supply different sized barrows that can be easily changed in and out.

You’re right, on folding up it wouldn’t be able to lift heavy materials and filling it flat would mean that material would get trapped in the folds, preventing the barrow from closing and locking properly. In reality I think there would have to be warnings/instructions telling the user not to load it when it’s flat, only to load and unload when it’s folded and locked.

I’m going to try to do some more work on the frame folding, to make this smaller and more compact and I’m thinking about a yard cart version. PT

Very interesting concept. Maybe because I’m a kitchenware designer but there is definitively a commercial potential with this cutting board. However I see 2 things that you would need to look into in case this goes in production : 1 - The board will likely be made in PP because of the living hinges there are chances that, after you fold the item, the board doesn’t sit flat on the table because the plastic springs back up. If you want to push this further, look closely at the Joseph Joseph one since it has a detail that forces the board flat. 2 - I’m quite sure that the ribs underneath are for the prototype’s purpose but if this is a detail you want to keep, I would suggest in making them a little bit more attractive since I get an engineering look from them.

Thanks Van, I definitely need to take a closer look at that Joseph Joseph board!

I have the J&J board and like its folding function because it narrows the board which makes it easier to transport the cut up goods into the pan. That’s the whole point of course. Although the folds do spring back up a bit which makes it a bit less of a convenient chopping board. With your chopping board, the added value would be that you can use it as a serving bowl. However, chopped goods usually go into something else, and don’t sit in a bowl by themselves so I personally don’t see so much added value in that.

I think the wheelbarrow could be a great concept. Those things take up way too much space and are hard to store vertically, so if you can solve that I bet people will buy it. Esp. here in Holland because people have much less space to store things. It will probably take quite a few iterations before you have that worked out and you may want to look for a good mechanical engineer to optimize the mechanical aspects vs. cost.