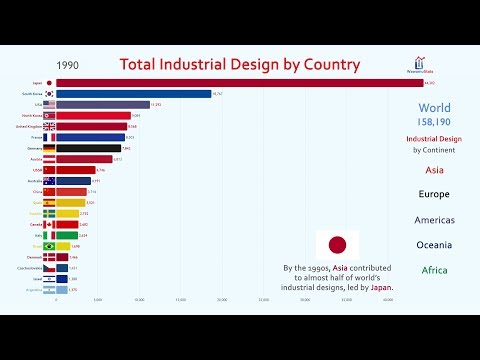 These are registered industrial designs or design patents. I think it probably says more about the typical cost/benefit ratio of filing in Western countries versus China. There are a few Chinese industrial designs that have my name on them and I believe they were just a few hundred dollars versus I think $3k CAD for a design patent in Canada. Plus, the enforcement is quite expensive in Canada or the US. I’ve heard stories of well connected factory owners getting the govt to knock on doors in China for suspected design infringement.

Since most manufacturing is in China, not a surprise. That said, I will always question the value of a design patent. Is the juice worth the squeeze.

I would very much like to know where the data came from to create this info-graphic. Raw data is very different from aggregated data.

a quick google search shows similar results from several no-name sites. but it looks like design patent applications not granted patents.
according to another site: “Germany placed number one in international industrial design applications in 2020, obtaining 3,666. The U. 2,211”
(but I’ve never heard of them either https://www.icsid.org/category/industrial-design/ )

The youtube video cites just “World Intellectual Property Organization” and they have some of their stats available here, searchable under a few different metrics, but measured by the ‘Hague System’ which is this I guess: Hague – The International Design System
WIPO IP Statistics Data Center
I didn’t look in depth enough to ‘get it’ but you can see where they pulled the numbers if you look there.

Many of my customers do prefer not to get a technical or design patent, anymore.

We do present the new stuff to the market via trade shows or B2B connections, but the news is not spread beforehand anymore.
Ask me why.

regarding design patents, the rule of thumb I was taught in school is you can get around them with around 15% of changes to the appearance.

I’m thinking the auto industry, typically big on design patents, but always approaching a common denominator around successful trends, would be a good example of this.

perhaps it costs a lot less in China to file? it’s a good metric of performance if you need to convince mgt your doing a good job

so yea, a million international design patents per year can’t be cheap or easy. a follow up would be to see how much litigation is filed to actually defend them?

A lot of places I have I worked have applied for design patents in both the US and China… getting aa patent in the country of manufacture can be helpful. A previous employer learned that the hard way and they played wack-a-mole at various ports but couldn’t stop the manufacturer in China. Filing for a Chinese design patent in a addition to a US patent on products designed and made for the US market seemed to offer a little more protection, and was inexpensive.

I’ve heard it’s futile to try and sue a Chinese company. so why all the IP?
one guy I work with who’s spent a lot of time there says the concept of possessing an idea is alien to the culture. I’d think that might have been true at one time but hardly anymore.
However, you raise an interesting topic with the apple suit, do you think they aren’t defensive patents but aggressive instead? they see becoming a nation of patent trolls as a new source of income if they can win large lawsuits?

There are some good tactics to use when dealing with Far East manufactured products that have any potential for knock-offs.
A. Patenting in the region where sales will occur is a logical first step and can be enforced by utilizing the US CBP but only if you can track which port(s) shipments of the knock-off products would be coming in.
B. Patenting in the region where sales will occur is also handy for drafting cease & desist notices for delivery at US/Canada trade shows where knock-offs are being shown (can be done in Europe with more coordination but useless to try almost anywhere else).
C. Patenting in the region where the original products are being manufactured is nearly useless as the company trying to stop the knock-offs has to have a big presence in the region to deliver and enforce a cease & desist (my small Far East team would get laughed out of a factory trying to take those actions).
D. Manufacture in separated zones - we had a client who was concerned about knock-offs so I had one part of the system manufactured in Tianjin and the other part of the system manufactured in Shenzhen. The packaging was blind (no brand) so the two factories had no way to find each other and the two parts of the system wouldn’t operate without each other.
E. Get in, get your market share and get out. This is a good tactic for giftables and trendy products that you think have a shelf life of only 2-3 years. It takes 6-9 months of knock-off development, 3-6 months of channel placement, 6-12 months to get traction. By then, you’re out. (The same process happens in reverse if a company infringes on your patent - it takes time and effort to shut them down and by then they’re out of the market and you’re out tens of thousands).

Like some other posters here, I’d be interested in knowing how these figures were determined. We do almost all our ID here, but my Far East engineer/designer hybrid guys tweak as necessary as we refine for cost, etc. So if they’re counting those tweaks as the primary ID then it’s not entirely accurate.

I’ve experienced (Chinese) companies filing design patents for the sake of filing patents. My guess is that the number of patents is “impressive” in a slide deck to investors and they are cheaper and faster to get.