There is a new PT Cruiser - type vehicle coming out from Chevy as a 2006 model. It is based on the Cobalt (Cavalier replacement). It has that kind-of retro wagon look that the PT has. My question is…why? I’ve heard that PT sales peaked a while ago. 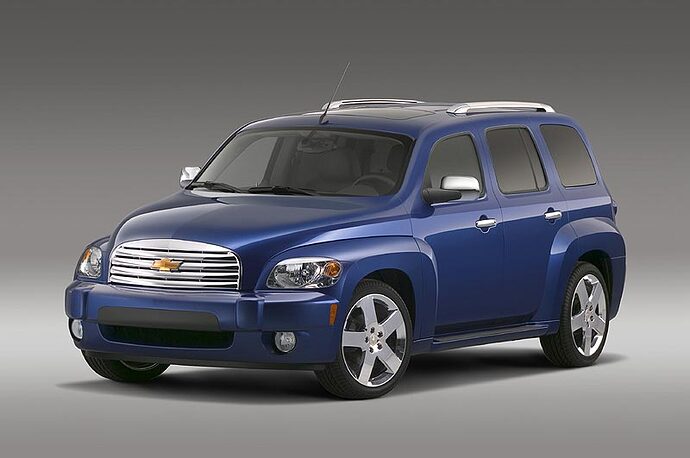 Interesting thing to note on this car is the grill. Its upside down U shape looks alot like that Ford front end that I posted in some other topics. Are Chevy and Ford trying to look alike or is someone asleep at the wheel?

I think this is a great example of how corporate culture effects design integrity. There are top notch designers at Generic Motors, er, I mean General Motors, I know a couple. Great concept cars like the Caddy Cien, Saturn Curve, and Buick Centiem prove it.

unfortunately their corporate decision making process is so F-ed up it doesn’t matter and you end up with the same guy that designed the PT Cruiser, Brian Nezbit and the same guy that approved it, Bob Lutz, being hired in to save the company. Under the pressure what squeaks out, the Chevy PT Cruiser, er, HHR.

Some body call human resources, I’d like to report an HHR violation. No matter how talented the design pool is, if the structure leaves the decisions in the hands of a glorified salesman, your screwed. Lutz and Nezbit are talented, but two guys cant bucket all the water out of the sinking Titanic… cue Celine.

The lead designer for the PT Cruizer moved to GM a few years ago and became something like head of US auto design.

Once the lead designer for the SSR drove one to school for a lecture. I walked up to the car, and opened the gas lid.

They hyped the car so much as a design based product, but used the cheapest and most common plastic gas cap. I was expecting some aluminium-like cap or something that at least will look a little more thoughtful.

My old proffessor used to say “if you try to polish a turd, all you get is crap on your hands”

Check out this HHR Chevy commissioned West Coast Customs to mod out.

of course it looks Durango-ish. when is company is number one in innovation everyone else tries to cash-in on their “look”.

I can’t decide what it’s trying to be. A milk truck, or an SUV? A sporty wagon? A PT imitator?

I’m quite surprised, frankly, that chevy has managed to produce something that uses such uncommon, retro styling yet is profoundly boring. The paradox of unique accents and a boring overall structure is mildly irritating…it’s just plain hard to look at.

However, I still don’t think it can surpass the SSR for sheer stun value. I remember when I say that car for the first time. I was literally seechless at this…thing…which had appeared in front of me. A restored pickup from the 1930’s, perhaps? But then why are there so many compound curves all over it? Then the roof retracted…what? An automatic retractable hardtop? A leather interior? What the hell is this thing? And if it has a 300hp supercharged V-8, why does it have a flatbed?

Also, the doors’ rounded baselines are deeply disturbing. Poor use of space if you ask me. Chevy’s never had truly great design (well, the 1957-62 corvettes were pretty awesome), but these new things are one giant plummet for car design.

what do you expect…the only person more out of touch than Wayne Cherry (previous CEO) was, is Bob Lutz (current CEO @ GM).
He’s around 72 and doesn’t have a goddamn clue about design moving FORWARD. A little like the Durango?..ALOT like the durango, except smaller and even more useless.

I thought the SSR was the ugliest, most pointless piece of retro nonsense I’d ever seen next to the PT cruiser. Now put them together and you get the HHR…pure genius.

it’s like Chrysler and GM mated and ended up with some retarded offspring.

How do you get in, I don’t see handles? Rub the side panels and say open sesame?

family/cargo style but trying to look sporty (i.e wheels), it’s like a 55 year old guy trying to dress in nike gear, its a bit sad and symptomatic of society. In that sense I preffer this, at least it’s effortlessy sporty, and the (real sportiness is inside). 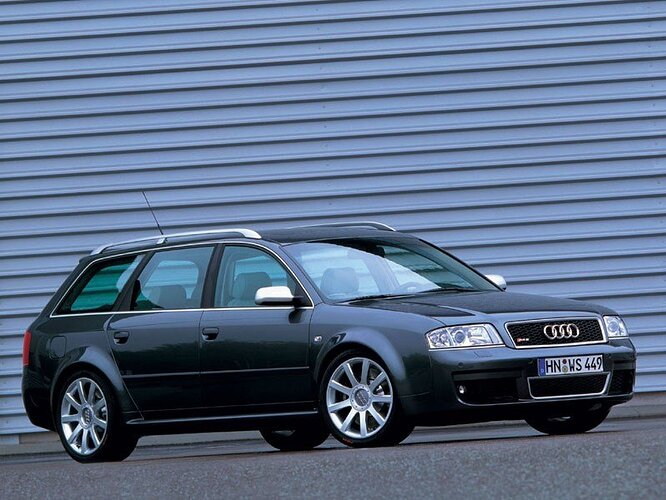 If West Coast Customs did it, that’s probably where you plug in the XBox controller.

Since the body wasn’t channeled, I would suspect that the reason is the poor quality of a pre-production unit.

How do you get in, I don’t see handles? Rub the side panels and say open sesame?

This is an old Hot Rod thing. They use a solenoid to operate the door latch. Then they either use a remote to activate the solenoid, or they place a button in the fenders or under the rocker panel to actuate it.

I’m impressed at the quality of the chop job. It must be very hard to fit the new windshield. In the old days the windshields were curved in one direction, now they curve in two.

From a styling viewpoint, I just realized there are big fog lights under the mesh in the bumper. Are they trying for a rally car look, or a vintage rod? I think they didn’t succeed either way.

… big fog lights under the mesh in the bumper. Are they trying for a rally car look, or a vintage rod?

I would have to agree with ono, the audi wagons are classy, clean, and perform - check out the RS6 videos on www.racingflix.com.


Why are vehicles like this coming out? Because the majority of Americans have no taste, no aesthetic awareness, and being here in Colorado for a while are downright backwards. I am sure that we will see these things on the road. What a nightmare, nevermind Chris Bangel, these guys from GM should be fired and prosecuted.