Speaking with the maker, he thinks we can do just one pin. Haven’t had (made) time to do mockups yet… laziness. I need to do it.

Yo Micheal, how are you?! (was it you I ran into at the core77 conference on the bus?)

I love this project, and Chef’s knives in general.
Seems like you’re in that stage of detailing out the surfaces of the handle.
The grip of a chef’'s knife has always informed the final beveling of handles I’ve worked on, it’s a tough balance of simple, beautiful and functional.

Chef’s knives are supposed to be held partially by the heel of the blade stock like the picture.
Most folks at home don’t do this, and I’ve always wondered why because it allows for much more control.
I’ve hoped that someone could come up with a handle that could help map the home-chopper to adopt this best-practice grip position.

As someone who’s spent some serious time working on kitchen tools, It’s very hard to beat a good Chef’s knife - a serious must have.
You’ll have to let us know when this project sees some production: Would love to own one.

A few of my knify faves.

These are the type of knives the brand I’m collaborating with makes. They don’t have bevels.

I think you may be mis-understanding some knife terms. Your knife absolutely does have bevels if it is sharpened. In knife terminology, “bevel” doesn’t indicate the large visible slope that one might call a geometrical bevel; “bevel” indicates the surface that has been ground at an angle to the vertical plane of the blade. In the case of the Japanese single-beveled knife, the blade is thick, so you can see the gigantic bevel. In the case of a western style knife, the blade tapers to the edge from the spine, and the actual edge itself is sharpened on both sides, so if you hold a magnifying glass up to the edge, you’ll see that there are two bevels on it, though they are small. It is possible to make a thin, wedge-style blade where the inner face is truly vertical, so it would be single-beveled, but would not look like the Japanese style blade where the bevel is visible because the slope of the main surface goes all the way to the spine, and the actual fine edge grinding is small, but only on one side.

The fact that a western style blade is a wedge and is sharpened on both sides of that wedge makes it double-beveled. If you use such a knife to make thin slices, you will see the effect I was telling you about: instead of making thin vertical cuts, the bevel on the inside will push the blade out, and you will make wedges rather than truly vertical cuts.

For the sake of understanding the ergonomics and functional characteristics of the difference, may I recommend an experiment for you? Get a characteristic western knife or a double-beveled Japanese knife and a single beveled Japanese knife. (You should be able to obtain cheap single and double beveled knives at Daiso (they have them for $5-$8). Be sure to check the packaging for the little graphic indicating double or single bevel grinding. You can see from this one that this Santoku style knife is indicated as being double-beveled: 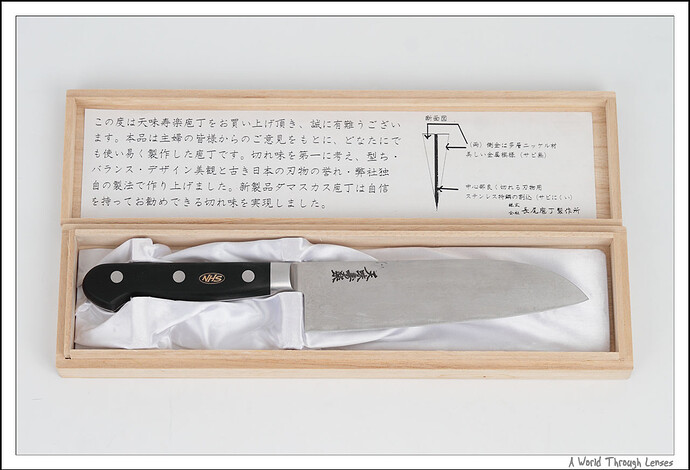 The ones that are single-beveled will have a little icon or picture indicating that they are single beveled.

Get a potato, a carrot, and a daikon, and try to slice potato chips and similarly sized slices from each of these. You will feel the difference, and then you can design your knife accordingly, knowing how the different bevels cut. What you will notice is that whereas the blades that are single beveled will slice potato chips off of a potato with even thickness, the double-beveled blades will not; the cut line will veer outwards and you will get wedges rather than slices.

See this page for a more thorough discussion on facets/bevels:

Have you seen these sharpeners before?

These sharpeners have multiple slots because each one grinds at a slightly different angle, resulting in a compound bevel.

Almost all western knives are sharpened this way, in one variation or another. The idea behind this approach is that the blade body itself, while originally made from a sheet of steel, is ground with a taper, but the actual cutting edge itself is at a slightly wider angle to resist going dull, but still cuts because in spite of the blunter angle, the metal is so thin (due to the tapering) that it cuts well anyway. Consider the fact that people can get paper cuts though the edge of paper isn’t sharpened. An unsharpened razor blade is thin enough to give you the same kind of cut if pulled along your skin. Thinness is enough to make something cut; the thinner the edge, the less acute the angle needs to be. But the angle still influences which directions the resistance forces push against the blade when cutting, so if you made your blade taper only from one side, and did a multi-bevel (micro-bevel, rather, if you want to keep the beveling small), you could get the look of the western style knife, but the thin slicing performance of the single-beveled Japanese knives.

The multi-bevel approach is also done to lessen the amount of metal that must be removed to obtain an edge. Sharpening another bevel at a steeper angle means less metal must be removed, whereas polishing the entire face of an already existing bevel at a finer grit is a lot more work. This kind of more labor-intensive polish is the way that Japanese swords are polished, mostly for aesthetic reasons. Some folks also want this kind of aesthetic for their kitchen knives: 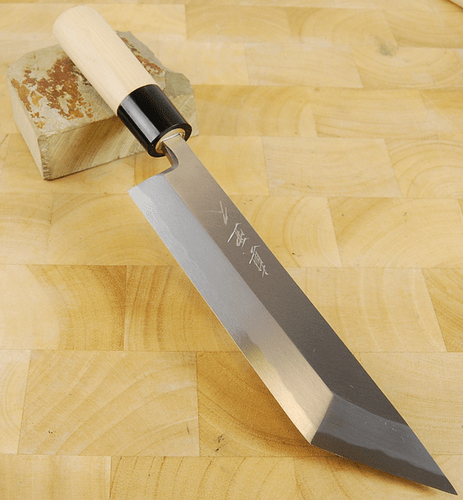 (…but strictly speaking, using a one-angled bevel whose entire face is polished with each finer grit doesn’t do anything for the blade’s performance.)

The knives you’re designing might not look like they have a bevel, but here’s what’s actually going on in the geometry when they’re being sharpened:

Notice that in the graphic above showing the cross-section of the blade being sharpened, the blade body itself in this case is a wedge, and a small bevel is being applied to the edge via sharpening. (It is inevitable that if you grind metal away from the edge, a bevel will form.) If the blade body were a slab (like the Japanese single-beveled blades) rather than a wedge, that bevel wouldn’t be small; it would be large and visible, as was the case in the Japanese knife I showed you that had a large, visible single bevel.

Last entry on bevels / facets / wedges and tapers (at least until you respond), I promise.

I took the drafted picture of your knife’s handle, and drew in a couple of blade geometries to illustrate what it is that I’m suggesting. I’m suggesting that you use a single-beveled wedge shape for your blade, and that the actual sharpening (all the other bevels that may be added in the course of sharpening) are on the right side only. This way, the blade can make thin vertical slices without the problem of the inner bevel pushing the blade outwards. 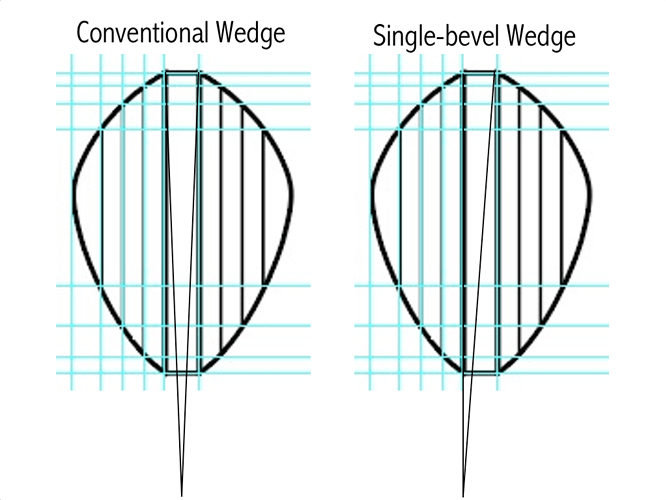 Thanks. But I’m just designing the handle, not the blade.

This is a gorgeous design. I like how the handle and blade connect and the back tip of the blade has a forward angle making it less pointy.
Getting the translucency of the handle right will add to the aesthetic. Also thanks for the explanations on single beveled knives, now I know why I don’t get those perfect brunoise cuts. I would love to see a set of those, including a manual diamond sharpener.

Slop back burner project, I just work on it a little bit at a time. I got some input from some professional chef’s about grips they prefer. They actually preferred the very first concept so I’ve been iterating on that. 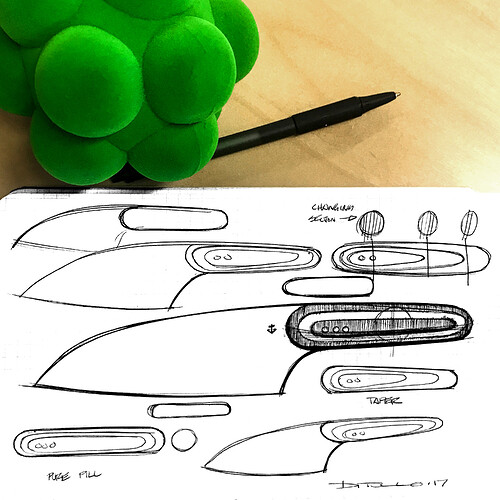 I got some input from some professional chef’s about grips they prefer.

OK. This is horribly snarky. Are you making this knife for some professional chefs?

You know my point. Why aren’t you mocking up handles for you to use? Hell. You’re the boss. Make one of your people to mock up a handle or two.

I would not consider it snarky Iab! Just increbly consistent.

This project has been on the slow burn. Just teasing around 30 mins here or there. But you are right.

One thing I have been thinking about is what to make the mock ups from. I’m thinking of layering balsa wood so I can simulate the shapes the layers would make.

Just had time to play between meetings though. 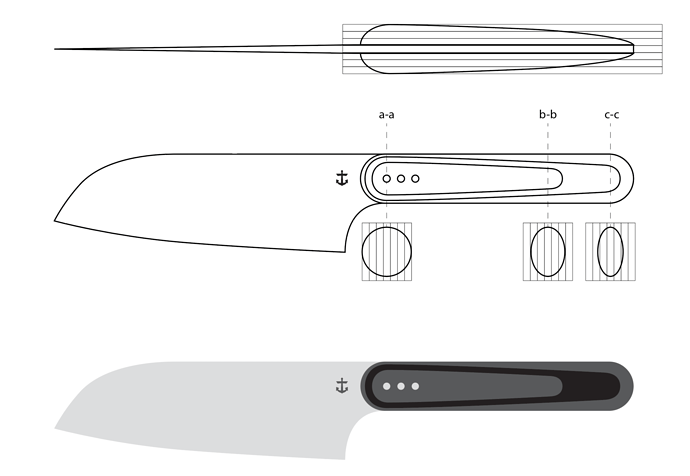 maybe the plan view taper should go the other way… I need to mock it up!

Love seeing the progression here, looks great! Have you explored the Japanese Style WA handle at all? I got my first WA handle Gyuto recently and I find it very comfortable.

Digging the new design with the three dots and circular ends!

If you decide to laminate layers of balsa wood sheets, I was thinking it might be helpful to put a drop of food coloring or ink in the wood glue used so you can clearly see where the boundary of each layer ends.

Looking good Michael! It’s not clear to me how the back tapers down right now. The pinky and back of the hand can cramp up if there’s not enough material back there. Depending on the handle material, tang, and butt design you go with, you may want to consider an endcap for balance since all of the rivets are pushed forward at the moment. Curious to see how it turns out.

I realize I haven’t updated this in awhile. 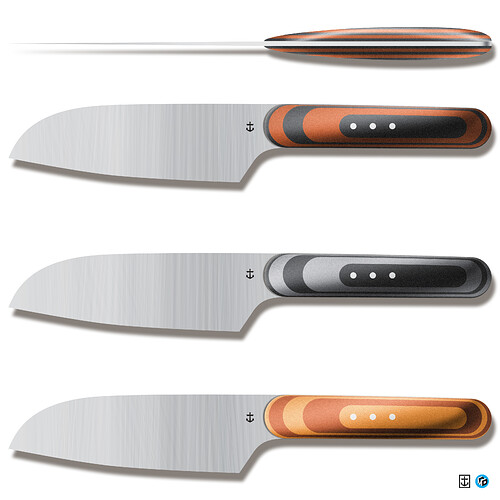 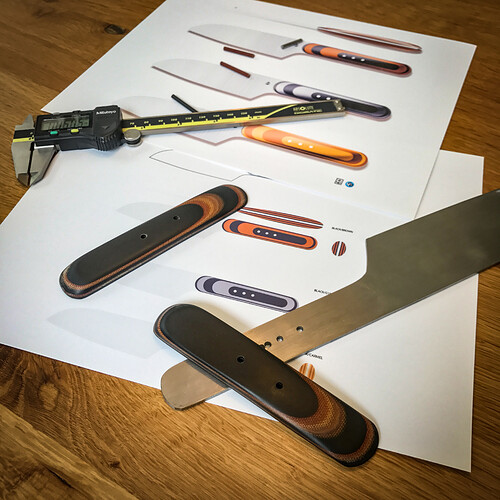 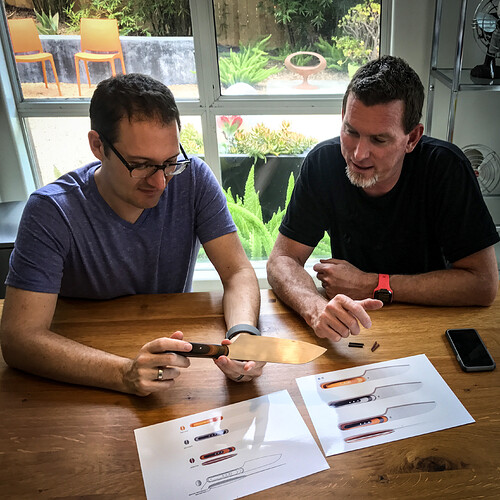 What’s the handle material? I really like the texture too it. Kinda gives it a dot matrix look. Have you tried a full gradient from dark to light instead of with the darker stripe in the middle? 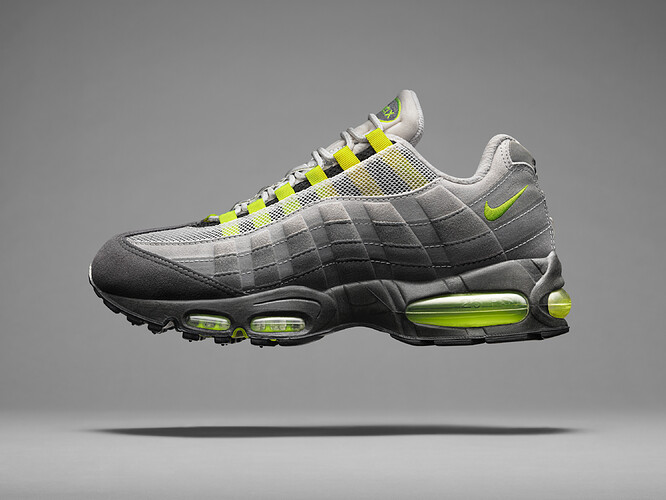