Check my Sabbatical project, It might help you,yes you.

I think the graphics look a bit 1995 though.

i was quite sad when Zootool closed down because it was my go to tool for bookmarks. Did you use it? i think it had some great visual represenation of the bookmarks and useful features like search tags, seperation by medium (videos, pictures, pages)

A while ago a guy posted this also, which looks promising: http://www.my-harbor.com/

What stage are you in? The graphics are looking like a prototype stage but it seems to be online and working?
As my perfered tool, zootool, closed down a while ago, I was looking for an alternative. If I would have come across yours, I probably would have disregarded it because of the graphics right away. The smiley faces and bold fonts also don´t help.

Just my 2cent. I really admire your dedication and enthsiasm! great thing to tackle a problem and make it this far!
cheers,
Jan

Really cool idea. I use the dashboard in safari for all my favorite daily visits but there just isn’t enough space. Might be some visual inspiration for you though. Still very simple. Just more simple. 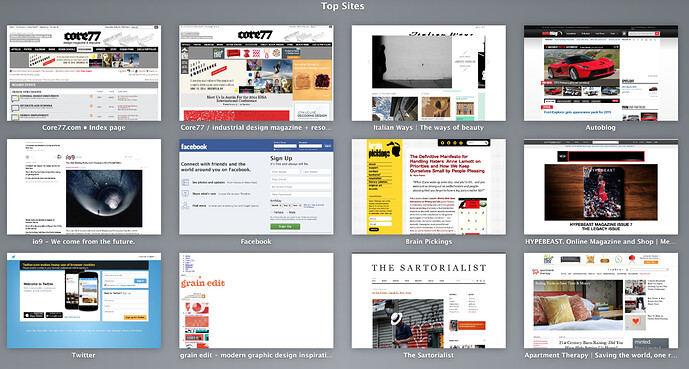 I save tons of bookmarks but rarely go back and reference them for exactly these reasons. This looks awesome and will give it a shot!

The issue is that when you add fancy stuff like gradients, shinny buttons etc and you have to render them 100’s of times, performance goes down, so I opted to render everything with css, so there are about 10 tiny pr-rendered graphics. But will keep it in mind if there is next iteration.

I think you can still make it look less 1995 without adding all the fancy stuff simply by using some nice fonts, not over designing elements, removing the pitch black drops shadows, removing repeating elements, adding the right amount of padding and margins.