Roxio Easy CD Creator 5.1 was on my PC when it arrive from Dell. It worked reasonably well.

The MS Service Pak that was installed prohibits me from re-loading the original Roxio program (or at least original Roxio installation disk says that the “current” version of Windows does not support it).

Upgrading from Roxio is a complete pain in the ass, half of the links on their website are dead and I’d just as soon forget Roxio.

Can anyone suggest, from personal experience, an alternative software suitable for creating both data and music CDs?

i use nero. so far i haven’t had problems.

Thnx U… I appreciate the timely input.

I hate browsing through product lit … Nero 7, Nero 6, Nero Digital, neroBS …
Which version/product, in particular, at you using?

waaaaaaaa … I just wanted to work on my R75/5 this afternoon, but wifey needs to rip n’ burn some CDs for her sisters … if the Roxio site wasn’t so f*k’d up I’d be done with this by now.

i have 6.3.1.4 version, but i guess nero7 (if it’s out) should work too because it’s an upgraded newer version.

well i guess you got sunday, right?!! cool ride.

I’ve been using Nero for years and couldn’t be happier. Maybe slightly more complex than Roxio, but I’ve made one coaster to the ten I used to make with Roxio and no stupid dancing instruments to direct me how to do it!

BTW, Roxio LIES … I’ve recently had a bunch of ‘viral’ belated problems with my 'puter so I’m hesitant to install and/or download anything. Out of sheer despiration to be working on my scooter, I simply ignored the Roxio warning that my 5.1 version was not supported … and loaded it anyway.

It works ‘okay.’ I completed the assignment for the wife, and she spent the rest of the afternoon merrily rippin’ n’ burnin’ to her hearts content. Granted we have a few more ‘coasters’ than we did yesterday, but SHE bought the CD’s, not me … and I can never find a freakin’ coaster when she says I need one anyway! So, win-win!

Me … ? I got spent the rest of the afternoon installing the new stainless exhaust system on my '73 R75; it cost damned near as much as the bike is worth, but it’s schweet.

I kind of spent the afternoon doing the same thing. I just installed a sweet new carpeted dash cover on my Toyota pickup truck! Fantastic! No joke: I bought the truck about a month ago. It’s a 1988 Pickup with 69K miles on it! It’s my first beater and a love it. Now I cruise around town in a tank top tshirt and a gun rack in the back window. I’m thinking about making it into a low rider.

Stop by your local recycle center and pick up a couple of trash bags full of beer cans to throw in the bed. In traffic it’s especially intimidating to vehicles behind you when the cans fly around in the turbulence behind the cab. And take off one hub cap, preferably the right front.

Oh yeah, and get one of those cheap, black, warped, roto-molded, cross-bed mounted, tool boxes too … and don’t lock down the lids. 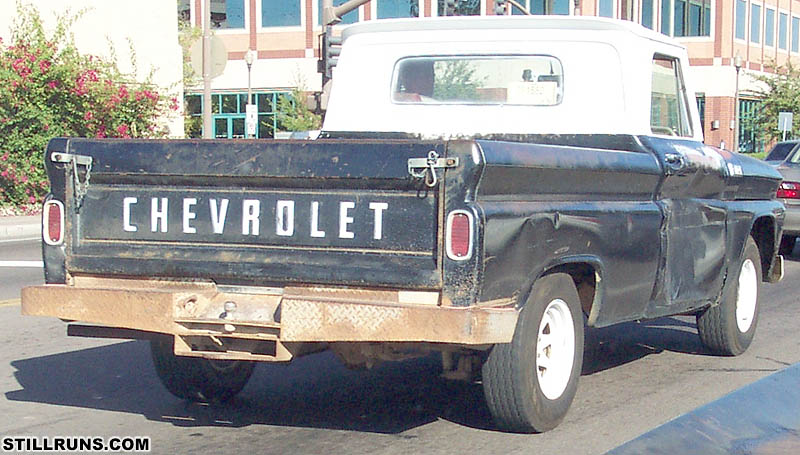 Thanks. Great post. Hubcaps? If I don’t have hubcaps, do I add one to the right front? The beer can idea is a classic. Right now I just have eight 50# bags of tube sand stowed back there to weight my flighty behind down amidst all this ice and snow stuff!

I actually looked at a sick white Craigslist fiberglass bed cap today (pictured below), with sexy smoked glass, a nice flair to an ultra-large back hatch, and even some racks on the roof to lash my deer to. I’ve got to see if I can talk him down. I wonder if you can re-caulk that glass. After 16 years, all the rubber and plastic gets all brittle and crackly…

Came standard on my Toshiba Satellite Pro, but I upgraded to the professional version to burn DVD project backups of my freelance work.

Software works great, and the best feature is that all you do it Drag and Drop as the name implies… If the folder is larger than 1 CD the software automatically divides the folder so that it can be placed on multiple CDs and creates the “paging” system. Makes backing up or Archiving large program folder a no brainer. It also manages to keep all links such as SWX and Pro assembly/part relations intact.