Has anyone seen this? 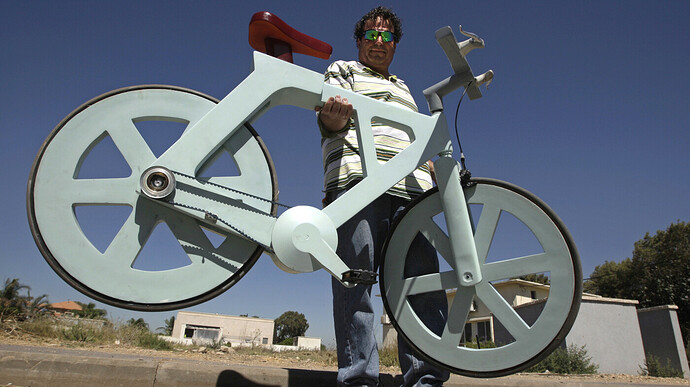 For About $20, Cardboard Bicycle Could 'Change The World,' Inventor Says

The materials are plentiful and the process of twisting, shaping and lacquering makes for a frame that's strong and durable, inventor Izhar Gafni says. Mass production is supposed to start in the next few months. See video of a bike in action.

Pretty rad. I had seen an image of it, but not the video. Pretty rad what people can do when they get something stuck in their head

It’s an amazing feet for a guy with a workshop building something with an unlikely material…especially considering it was done mostly by eye and feel, not software. This is trial and error, garage-engineering-for-the-hell-of-it, at its best.

That being said, It was a cool project, nothing more. This doesn’t in anyway threaten or change any paradigms in the way bicycles have, and have been evolving, for pretty obviuos reasons.

And now the rain on the parade. Unfortunately it fails the sniff test. Front forks, crankshaft, handlebars, simulated cardboard, no structural way in that dimensional section for enough strength and connection to bearings and metal parts. Frame, especially front, very doubtful. 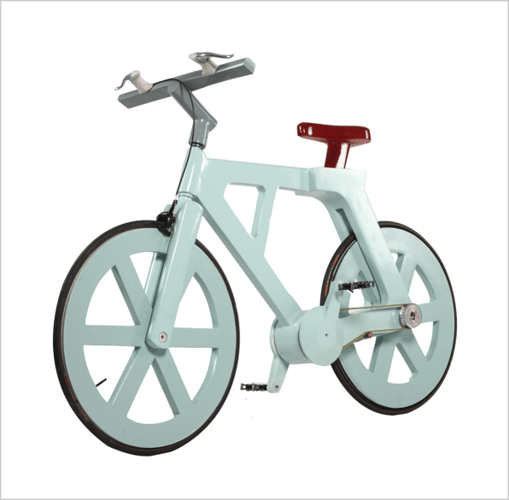 This $9 Cardboard Bike Can Support Riders Up To 485lbs

It’s 100% recycled and very lightweight, with a frame that’s stronger than carbon fiber.

Sorry, but I am raising the hoax card. Raising money for manufacturing as the article states, sure, the video is perfectly suited. Passes the Kickstarter “no rendering” policy, although there may need to be a verification process for the next round.

nxakt: My gut reaction was the same.

I am pretty sure you can build a " cardboard" bike as long as you substitute some of the wood fiber with “glue” (epoxy), but that would not retail for 20 bucks. This guy sounds bogus, would be nice to be proven wrong on that, though.

That’s not cardboard. We already have a material made from resin impregnated wood fibers, it’s called MDF. If it were stronger than carbon fiber, Ikea would be sponsoring F1 cars. It’s possible he’s spinning some story about the cellulose nanocrystal material that was announced a while back, but that is at least a decade away (if ever) from being a viable engineering material.

I saw that on a video a couple weeks ago. It is very cool! But I do agree with mo-i in that there is probably more than cardboard into the bike that makes it as sturdy. The product design is very cool though! It wouldn’t surprise me if a product design company starts to pick this design up!