Can the designer sell the original sketches?

Can a designer sell his/her original sketches on ebay or other outlet? I am a freelance designer so am not under the thumb of a corporation. We rarely sign contracts in my business so not under any legal liability too. Like if one designs something important, then do those original sketches have value?

Hmmm. Just want to get other professionals take on it.

I wouldn’t, I don’t think it would come across as professional., whether the client owned it or not .

I’m a bit secret squirrel about my work, have to be in order to gain trust, 80% of my clients - I would never tell you that I was working for them.

If I was the client and I saw it on ebay, I’d think, ‘can I trust this person? What will they sell next?’

I second Shoenista. If there is no binding legal agreement, you are free to sell them. However, if one of your clients sees that you are selling this stuff, you will be seen as a back-stabber.

Another point is: how much do you think you can get for them? I would think that anything other than a sketch of a significant object (iPhone or something) wouldn’t be worth much.

On the other hand, if you are straight up with the clients and they have no prbs with it then that would be a different matter. . Im thinking like, ‘yo Sony client Buddy, guess what, you know those sketches I did for the Playstation a few years back? well guess what bud, Im gonna put them on ebay. But of course, if you have a problem with that I will give you first refusal.’ No seriously, if you talk it over with your client should be no problem.

I agree with the others. I was only answering the legal side. From the professional side it would be a disaster.

Depends on the client. We have a very casual relationships with our clients. A lot of them would be cool with it. They would say damn Brook, nice idea, but I get a cut.

Is there a market for buying sketches? Are you really just selling the ideas? I can’t imagine that because how would the person know what they were buying unless you told them before the sale in which case why would they then buy it?

Oh wait, I just realized you’re the guy who people go to for “your style.” Do you feel demand from the public to put out your sketches?

Im talking about if a product as been launched, and you have (and did) the original key sketch for that launched product, I wonder if there is a market for that original sketch. For example, I know the guy who has the original sketches for the XBOX 360, and dont you think that there are enough geeks who would love to own it/those? Now we are talking about Microsoft, and you dont want to mess around with those guys. But if the client is down with it then maybe a market could be created.

Yeah mrtwills , I have had someone ask for a print of a sketch and they wanted me to sign it. Apparently they loved the product. They paid 500 bucks for it too and that wasn’t even an original. And yes, Im the guy who says its all about style. Sorry, I don’t want to design condoms (unless there was a substantial research phase).

Okay, say that you are a freelance designer and you did designed some pretty hip shoes. They go onto market. I am sure some sneaker buffs would love to have those sneakers AND the sketch that led to its implementation.

I’ve had people ask for my original sketches (for money). When you sketch as well as someone like Brook, and you do a high profile product that has cultural resonance, people are going to see that sketch as a collectable piece of art. No different than a vintage travel poster. I’ve come across old blue prints from the hey day of Detroit on ebay and definitely thought about plunking some cash down. No different, in fact, it is much less of an issue as it is a theme sketch and not a detailed manufacturing project.

Personally, I wouldn’t sell the original because I would want to keep it for myself. I’d sell a signed print, or a book (!).

Why so harsh guys? It’s a sketch, not that legal right to manufacture the product, and as Brook says, the client is cool with it, who are we to judge?

I think the more people get an insight into the behind the scenes, the more they have an opportunity to appreciate the talent, skill, and creativity that goes into product design. That is a good thing for us.

Hey Brook, what are you selling

I think it’s great to see the original sketches for products, and it’s a damn shame most are probably squirelled away in a flat file somewhere forgotten.

This is a cool original… though not sure if everyone’s seen the product. The IBM X40 drawing faxed from Richard Sapper in Milan to IBM in NC

Hey Travisimo, Im not selling anything, yet! I want to feel it out first. Ill let you know if I let anything go tho. Im a sketch hoarder and normally try to keep everything.

Yeah, you’re not selling the intellectual property rights, just the sketch itself. Maybe you gotta put that in writing.

Thanks Yo, with you on all that.

I guess my concern along with a lot of other folks would be around the IP, i.e. can you sell a representation of a trademarked product with no recourse without it clearly spelled out in a contract? 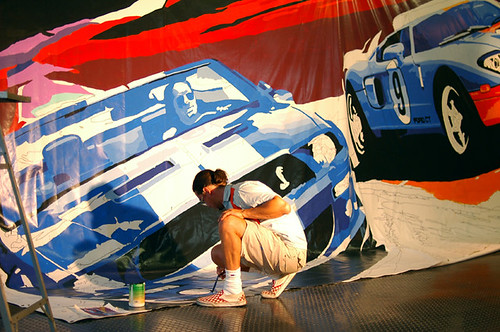 A couple of my professors in school did a huge sketch composition of ideation and presentation sketches for the faculty show one year, and it was sold the first night of the show for a pretty decent price, the more rendered out images at the bottom got cropped out on this shot. It was pretty awesome, it was done on like a 10’ long piece of butcher paper, the higher fidelity sketches (at bottom) were on marker paper, cut and mounted, I’m still trying to get a high res image to make a print from.