Can a "shape" be trademarked?

e.g. can K@rim R@shid trademark (or did he already) the blob-primitive shapes he has tattooed on his arm? In other words can he sue someone if they produce a bowl or table or sofa with a similar underlying shape?

Pretty sure Coke has their bottle shape trademarked… 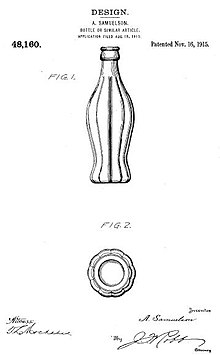 In the United States, a design patent is a form of legal protection granted to the ornamental design of an article of manufacture. Design patents are a type of industrial design right. Ornamental designs of jewelry, furniture, beverage containers (Fig. 1) and computer icons are examples of objects that are covered by design patents. A similar intellectual property right, a registered design, can be obtained in other countries. In Kenya, Japan, South Korea and Hungary, industrial designs are reg... 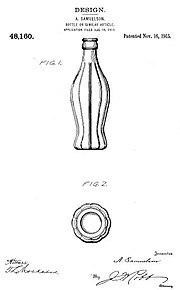 US design patent 48,160 for the original Coca-Cola bottle.

yes its a silhouette rule, think of the shadow it casts.

I think that it would fall under trademark rather than patent, unless Karim was looking to protect that design as a tattoo specifically.

That changed this year! There was a great article about this somewhere… Design Perspectives maybe?

If I remember correctly, you used to have to prove “novelty.” Now they simply ask casual observers if they think they’d mistake one product for the other.

The outline of a shape can be trademarked, as a 2D item.

Yes, wonderful news on changes to Design patents. It was either in Design Perspectives or Innovation.

The Coke bottle example has been around so long that it also is protected through Trade Dress.

Umbra has 3 patents for shape elements of Rashid’s garbage can.

Per KitchenAid’s efforts, their Stand Mixer shape has been trademarked, and they are willing to protect it:
http://www.reuters.com/article/pressRelease/idUS236994+30-Apr-2008+PRN20080430
Not all design, and trademark protection is the same, country to country, or continent to continent. US IP, or design protection is not the same as EU, or Austrailian.

I understand that shape trademarking is needed in some form…but I was wondering…is this not a very slippery slope we’re on?


Back when I was working corporate, I contracted several West Coast consultancies. All of them had clauses in their Master Services Agreement stating that only the final chosen direction from any program was owned by the company I worked for.

The argument from each of them was that if they turned over the full sketchbook of forms and concepts to be owned by every company they work for that they would eventually work themselves out of business. That in every market that there are a finite set of recognizable shapes.

Now, what I see as making this slope very slippery is the “recognizable” aspect of it. It was stated that if you were to ask a person off the street if it was able to be confused with another product than it infringes. I argue that most people off the street don’t have a particularly sharp sense or desire to differentiate the nuances of a design that makes it unique.

What is the time limit on the design patents? Is it like utility patents (17 years…or what ever?)

I’m with you there IP, lots of companies hire us to try to exhaust as many ideas as possible so I think there may be that danger. I’m sure you can write a computer program to pump out millions of variations on shapes, I think someone actually posted one here within the past year or so.

How exact will the shapes have to be in order for there to be a patent conflict? Will it force everything to be ultra organic so there is more room for subtle shape differences or will someone have to pull out some calipers to check for infringement issues. My son calls his creative mp3 player an ipod because it’s small, square and plays music (like how we used to call all portable tape decks walkmans). The general public doesn’t catch all the nuances that we do, even when we show them.

It’s already a slippery slope. It has been. I think what saves us in the end is the drawbacks of litigation.

Most companies are looking forward, not backward. They don’t have the time to sue, they’d rather focus on what’s next. Plus they usually want to play nice–lawsuits can get ugly.

Great example: the Orbea vs. Kestrel thread. Turns out both companies released a similar looking bike in the same season. Did they sue? No, they got together and issued a joint statement that put the issue behind them!

Design patents are good for 14 years, a trademark is essentially valid forever. Apple was recently awarded a trademark for the iPod. Here is an excellent article explaining the advantages of the trademark over the patent.