what about any CAD-programs(alias,rhino,…) in the footwear-industry-
does the designer have to model anything(like in ID) or is this stuff done by special modelmakers (like in Trans)?

Not really that common, TBH.

Clarks developed the shoemaster system but it is used more for pattern making than for design. http://www.shoemaster.co.uk/

There are probably others but many of us just work in 2D. It takes so little time to make actual footwear samples and the cost is quite low so the need to design in 3D is limited. Models aren’t generally made, real shoes are in the shoe factory sample room. It has to be this way because the fit is as important as the aesthetics,they need to be tried on.

Do use modelmakers for outsole molds occasionally, but personally, I prefer to check the blueprint and go sraight to metal if I’m confident enough.

Somtimes I’ve designed in 3D on vac forms of lasts if thats the way the factory prefers to work.

It is really the most beneficial on the tooling where there is sculpting, especially in athletic product where the bottoms can be quite (over) detailed. But I find it best to let the factory do the 3d, the few times I have had it done with modelers here, they have just wanted to re do it their way anyway.

There are several specific programs out there for upper (similar to what Shoenista is talking about) but they are geared more towards pattern makers.

Yo - I just picked up some Nike SB Zoom Tre shoes - maybe you are familiar with them - the entire toe area, up to the laces, is a molded elastomeric material. I was thinking it was a cut-to-size sheet until I saw the obviously molded detail around the laces. There had to be some 3-D CAD in the process in order to create the sculpting and contours around the toe, plus to accommodate sizing. (the soles by contrast are quite sedate.)

for sure there is CAD involved, probably done by the factory or an in-house CAD modeler, though, not the designer.

in my experience, I have never used CAD for an outsole or any other part of a shoe.

Typically, I would do a very complete scale tech drawing, showing sections, important dimensions, etc. then send it to Asia for the mold maker to do their version of it, accurate to the exact last shape (last bottom template, bottom curve, toespring, etc.). like this- 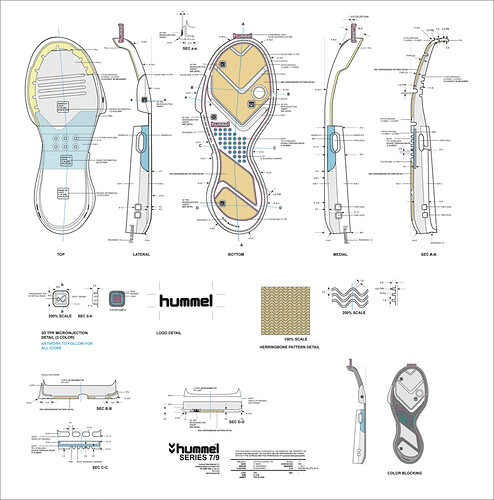 After the drawing is checked and corrected, a wooden model (a Renshape type material) is made by CNC for checking and additional corrections, then the full 3D CAD is made by the outsole mold fty to make the steel mold.

I think the reason that CAD is not typically used in the footwear industry is a matter of time and money. In the end, if an outsole (or other part’s) design intent can be communicated through a relatively quick 2D tech drawing, it saves lots of time for the designer. Of course, the CAD guys in the fty in Asia are also paid a lot less per hour, and mostly likely a lot more efficient.

As well, I have found that as there is a need to make sure the outsole fits the upper well, and takes into account things like shrink, it would be VERY difficult to do properly in CAD without also having 3d last data and manufacturing knowledge, most of which is not in house in many small-medium brands. Yo, do you know if Nike has 3D data like that in house?