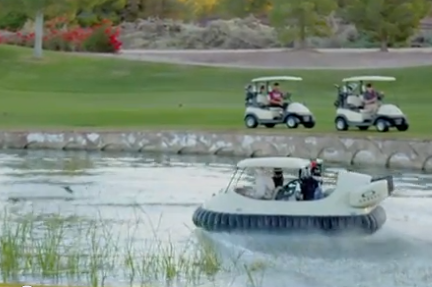 Bubba Watson , owner of brilliant pink golf clubs and provider of epic shots around trees , has a hovercraft golf cart. Yahoo! Sports spotted this video of Watson hanging out on the course in his very own hovercraft...

I dunno … other than the occasional, okay frequent, abusive epithets golf has always been a relatively quiet sport. And just blowing through the water hazards kicking up debris is pretty inconsiderate.

I’d think a golf pro would have a better appreciation of that.

I just thought he might like to maintain a little more decorum on the course. Then again, he’s from one of the damper parts of Florida so he’s prolly into his swamp toys.

the noise is a problem, but its actually pretty cool that it would tread lighter on the course surfaces. Bonus for traversing lakes! Watch out for those bunkers though…