Royal mail have now released a collection of stamps featuring the best of British design.

Pick them up from over here 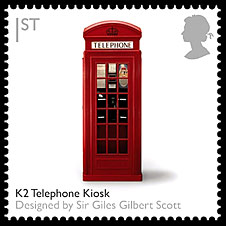 I’m glad to see a government celebrating design like this. Particularly, the rather anonymous designs of the polypro stacking chair and task light. However, I don’t like how Concorde and Spitfire are included, they were engineered, not designed. Also, why is there nothing after 1965 or so? Did Britain stop designing then?

maybe designs need to be 40yrs old before they are considered a classic?

The spitfire and Concorde are a measure of what design has done for Britain, i feel the hurricane should be on there instead but the spitfire is nicer to look at.

However, I don’t like how Concorde and Spitfire are included, they were engineered, not designed. Also, why is there nothing after 1965 or so? Did Britain stop designing then?

and to further the point…

Design is NOT Engineering.

IP: true in the dictionary sense.

IP: true in the dictionary sense.

I don’t know…maybe I am being too literal about it. But, I have grown tired of the Non Sequitur that the term Design has turned into.

A question on the boards recently asked Who the Enemy of Design is…I am finding more and more that the true enemy of Design is Industrial Designers. As a group, we’re constantly trying to segregate (put ourselves in front of) the full process that is Design.

Which carries the question a bit further. What truly is Industrial Design if the Concorde is not Design because it is “Engineering”? The Eames chair still required “Engineering” to build and manufacture. The iPhone is most definitely more than 50% Engineering, especially if you look at the man hours that is required to bring it to production.

By Industrial Designers continually segregating themselves, the more they back themselves into the corner of “stylist”.

Love it or hate it, what’s even more impressive about the Concorde is that it was designed without the aid of CAD! Designing without CAD scares me. Core skills are being lost because new generations are so reliant on technology, it’s similar to not being able to add up without a calculator - I can’t do that either - damn.

never thought I would buy stamps for anything other than their intended purpose, but I’m buying a set of these

IP: I see where you are coming from, and probably next week I’ll feel the same way!

This week, I just wish it was clear in the public mind what our profession brings to the table. I think stamps like these blur that.

I think that the stamps are a great thing for ID in Britain. They celebrate the design history here and help renew awareness of it. They may be a bit ‘engineering’ biased but so is our design history. Engineers in the UK probably have a greater status than an IDer (although perhaps this is slowly changing??), and this is probably a result of that history.

Anyway, I love the stamps.

Like it says in the blurb: “Design is usually about the here and now- the expression of a particular age. It is informed by the available technologies, influenced by prevailing taste, and is often a response to a paricular political, social or cultural agenda of the time”

I’ve started to watch these boards only recently, and it’s dismaying to see what a narrow world view “ID” seems to have around here, and it seems to fuel an underlying vein of professional insecurity.

What ID could have brought to the table? "OK guys, about this revolutionary aircraft/car/lamp/graphic design you’re working on: what you’re going to need are some mood boards followed by some user studies…"

Post 1965: Britain is no longer a manufacturing economy- It’s fundamentally a service economy now, so British design is very much alive, and seen in products and designers creating stuff all over the globe. Perhaps we should now look to the likes of Norman Foster, Tim Brown, Ross Lovegrove, Sam Hecht, James Dyson, Jasper Morrison, Tom Dixon, Peter Saville, Vivienne Westwood and others to define UK design heritage and global influence.